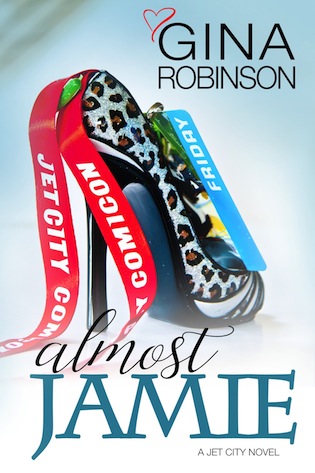 Half American, half English physician Blair Edwards has always wanted her Jamie, the Sinclair, the dashing Highland laird of the wildly popular TV series, Jamie. Unfortunately, it’s so hard to find a man like him in the modern world. When the stars of Jamie come to Seattle’s Jet City Comicon, Blair dresses up as Jamie’s Elinor in a vibrant red gown, hoping to get a seat in their popular presentation and a good view of the handsome, charming star of the show. She doesn’t expect to be called on to use her medical skills to treat an injured cosplayer who looks almost like…Jamie. And sets her wounded heart racing.

Cosplayer, geek, app designer, and cyber security expert Austin MacDougall has been styled by his matchmaker to look like the actor who plays Jamie. He’s been trying to win the prize for best amateur cosplayer for years. Against the advice of his friends, he goes to Jet City Comicon in a kilt as Jamie, the striking redheaded Highlander. When he’s injured during a mock battle with a vicious cosplaying orc, his friends get him help from a beautiful doctor in a stunning red dress.

Has Austin met his Elinor? The adventure is just beginning…

Find out why readers love Gina Robinson’s good guy heroes, the strong women they fall for, and their funny, witty, romantic stories. Grab your copy of Almost Jamie today!


(These two books must be read in order):


Austin pulled me past Jet City Comicon’s VIP waiting area to the front of the general admission crowd waiting to see the stars of Jamie. He seemed energized.

Several fan clubs gathered together at the front of the line, wearing buttons and holding banners.

He approached the throng and blew them kisses. “Lovely ladies!” Suddenly, Austin was Jamie, as played by Connor, right down to the convincing, and sexy, Scottish accent.

The cheering crowd felt his charisma and did a collective swoon. I was so close to him, I was nearly bowled over by the switch and power of personality.

“Beautiful lasses, I’m sorry to disappoint you. Especially as you’re so enthusiastic. But I’m no Connor Reid. I’m his long-lost American cousin.” He winked. “Or so we decided when I was tipping back Scotch with him last night.”

“That’s right.” He nodded and cocked his head the same way Connor did. “Get a good look at me up close.” He leaned in to one of the women nearest the cords holding the crowd back.

“Well? Austin asked in his best brogue. “Do I do him justice?”

The woman stared at him, scrutinizing him with breath held. “You may not be Connor, but you’re gorgeous and every bit the Jamie I imagined from reading the books.”

Austin took both of her hands in his. “Aye, you’re sweet to say so.” He lifted her right hand to his lips and brushed it with a kiss.

Austin stepped away from her and pulled me forward. “I’d like to introduce you to my Elinor. Even though she’s a Sassenach, isn’t she beautiful?”

“Take a bow,” he whispered to me, grabbing my hand and bowing with me. “This is Blair Edwards.” He gestured to my gown. “Look at this meticulous re-creation of Elinor’s dress she made!”

He spoke to the crowd again, dropping his accent now.

“We’re both cosplayers—we do this for the fun of it. And because we love Jamie!” 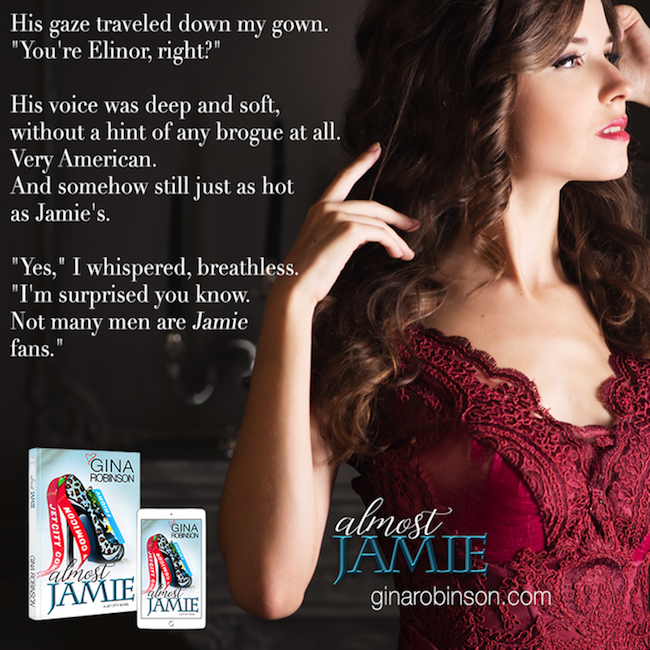 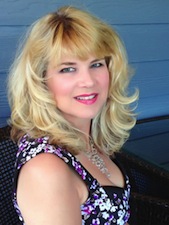 Gina Robinson is the bestselling and award-winning author of the popular Switched at Marriage, Billionaire Duke, and Billionaire Matchmaker romantic comedy series, featuring a billionaire in a surprising marriage of convenience, a billionaire who inherits a British dukedom, and a playboy billionaire in business with a Manhattan matchmaker, the Reckless and Rushed contemporary new adult romance series, and the Agent Ex series of humorous romantic suspense novels. Her books have delighted readers and received praise in Publishers Weekly, Booklist, and Romantic Times Book Reviews.

She writes romance and women's fiction across a wide variety of subgenres—new adult, contemporary, historical, romantic suspense and romantic comedy.

Her love stories are infused with a happy blend of romance, adventure, a bit of mystery, and humor. Readers are drawn to the light touch she gives even serious topics and the fast, fun, easy-to-read pace of her books. From college campus to Seattle to Las Vegas to England, her settings become almost characters of their own, driving the story.

She believes in the power of true love and passion, and that every great romance should have a happily-ever-after.