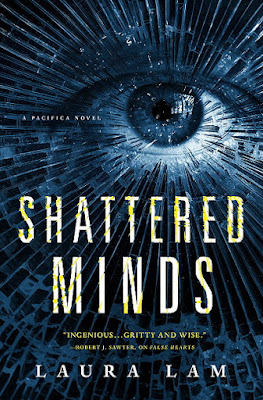 
She can uncover the truth, if she defeats her demons

Ex-neuroscientist Carina struggles with a drug problem, her conscience, and urges to kill. She satisfies her cravings in dreams, fuelled by the addictive drug ‘Zeal’. Now she’s heading for self-destruction – until she has a vision of a dead girl.

Sudice Inc. damaged Carina when she worked on their sinister brain-mapping project, causing her violent compulsions. And this girl was a similar experiment. When Carina realizes the vision was planted by her old colleague Mark, desperate for help to expose the company, she knows he’s probably dead. Her only hope is to unmask her nemesis – or she’s next.

To unlock the secrets Mark hid in her mind, she’ll need a group of specialist hackers. Dax is one of them, a doctor who can help Carina fight her addictions. If she holds on to her humanity, they might even have a future together. But first she must destroy her adversary – before it changes us and our society, forever.

“A multilayered, suspenseful thriller, False Hearts explores themes of identity and power in a breakneck plot that keeps the pages turning.” ―Ilana C. Myer, author of Last Song Before Night

“An ingenious premise, and Laura Lam executes it flawlessly. Gritty and wise, your own pulse will be racing as you get caught up in this exciting tale.” ―Robert J. Sawyer, Hugo Award-winning author of Red Planet Blues

“A taut futuristic thriller, set in a San Francisco where everybody is beautiful... and nobody is exceptional. Two unusual sisters are caught in a war for control of a society that quietly suffocates its outsiders, rebels, and the damaged. Taema and Tila are all three, and their strange past and unique bond make False Hearts a difficult book to put down.” ―A. M. Dellamonica, author of Child of a Hidden Sea

“A smart debut from someone who's clearly got what it takes.” ―Peter F. Hamilton, author of the Commonwealth Saga

She’s back in Greenview House. Her father bought it even though it was far too big for three people, outside Woodside, California, less than an hour by hovercar out of San Francisco. Nothing but trees surrounded that house that would become a crypt. She couldn’t wait to leave, and now, eight years later, she still can’t escape it.

Carina walks through the empty hallways, her footsteps echo- ing. Nothing exists outside of the house in the Zealscape, not really, and the windows only look out into a gray fog. All her dreams and nightmares take place in its various rooms. Even if the rooms can expand into streets or forests, no matter how vast, she could turn a corner and step back into those familiar corridors. She tried to change the Zealscape program to another setting, but in the end, her subconscious is too tied to Greenview House and everything that happened here.

She opens the door to the room where she last saw the young girl and the doctor she knew from earlier nightmares. They are nowhere to be seen.

“Anyone here?” she calls. “Come out, come out, wherever you are!”

Carina turns away. Needing her fix, she creates her first victim, bringing him to life on a table before her, prepped just as she wishes. Half the fun is the hunt, but when she first plugs in, there’s never the patience for it. It’s an appetizer of violence before the more leisurely meal.

Carina has a very specific type, here in the Zealscape. She kills criminals, perpetrators of terrible, fictional crimes. They are usually men, middle-aged, cocky in their assurance that they are getting away with their wrongdoings. She has killed women, for a bit of variety, often “angel of death” types. Never children or teenagers—which is why the vision of the girl was so damn jarring.

Where had that come from?

The Zealscape is where Carina lets it all out so that those people out in the real world, those strangers who seem as in- substantial as her dream creations, are safe from her. She has killed hundreds of figments within these walls over the last six months. Used almost every weapon. Killed quickly. And slowly. The one constant is that she never tires of it.

The man pushes against his bonds, the whites of his eyes showing. Carina has created him a serial killer, like her, but he preys on the innocent. He buries young boys beneath his house, like John Wayne Gacy. He’s not real, but he deserves death.

Her fingers itch and she moves closer. His chains rattle as his struggles grow more frantic. A desperate, delicious gurgling builds from his throat. Her fingers tingle in anticipation, and her heartbeat quickens.

Carina doesn’t speak to her victims. She did in the beginning, trying to make these fabrications of her imagination under- stand what she was about to do to them. It grew dull, unlike the act of killing.

Carina sometimes finds her situation amusing, when she’s coherent enough for amusement. The government doles out unlimited Zeal to keep criminals off the streets, yet offers them an unlimited playground to hone their criminal skills. With chronic Zealot mortality rates as high as eighty percent, however, the government doesn’t have much to fear.

Closing her eyes to concentrate, she opens them to a long, thin knife resting in her hands. There are some weapons she prefers—the knife is particularly instinctual, personal, whereas the gun is too distant, even if the kickback and the crack are satisfying.

Laura Lam was born in the late eighties and raised near San Francisco, California, by two former Haight-Ashbury hippies. Both of them encouraged her to finger-paint to her heart’s desire, colour outside the lines, and consider the library a second home. This led to an overabundance of daydreams.

After studying literature and creative writing at university, she relocated to Scotland to be with her husband, a boy she met online when they were teenagers and he insulted her taste in books and she insulted his right back. She almost blocked him but is glad she didn’t. She is now a dual citizen, but at times she misses the sunshine.

While working a variety of jobs from filing and photocopying endlessly at a law firm to library assistant to corporate librarian, she began writing in earnest. Her first book, Pantomime, the first book in the Micah Grey series, was released in 2013, which was a Scottish Book Trust Teen Book of the Month, won the Bisexual Book Award, was listed a Top Ten Title for the American Library Association List, and was nominated for several other awards. Robin Hobb says “Pantomime by Laura Lam took me into a detailed and exotic world, peopled by characters that I’d love to be friends with . . . and some I’d never want to cross paths with.” The sequel, Shadowplay, followed in 2014, as well as several the Vestigial Tales, self-published short stories and novellas set in the same world. The third book in the series, Masquerade, will follow in 2017.

Her newest book is False Hearts, a near-future thriller released in June 2016 by Tor/Macmillan and in three other languages. Peter F. Hamilton calls False Hearts “a strong debut from someone who’s clearly got what it takes.” Another thriller, Shattered Minds, will be released in 2017.

She is still hiding from sunshine in Scotland and writing more stories. 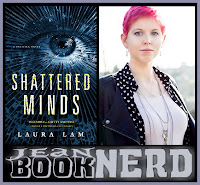