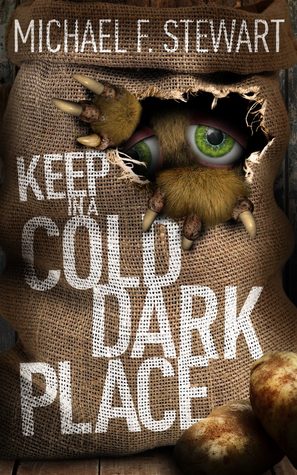 
Reaching for her dream, Limpy unleashes a cute, fluffy, NIGHTMARE …

Keep in a cold, dark place. That’s what’s written like some ancient law on every bag of potatoes the family farms. And it’s where Limpy fears she will always remain.

It’s also carved on a box of spheres she discovers in the cellar. Spheres that hatch.

Cute at first, the creatures begin to grow. Then the chickens disappear. The cat is hunted. And something sets the barn ablaze. To survive, Limpy will need to face her greatest fear. The whole family will. Or they may end up in a cold, dark place indeed.

By the tickle on her cheeks, Limpy knew cobwebs hung from her hair. She took a moment to run her fingers from her nose across her temples and ears to the back of her head, gathering up the worst of the strands and scraping them onto a ladder rung. She didn’t dare think about the spiders that made the webs. Only a few more bags remained. The gooiest, mustiest bags with eyestalks like periscopes. But Limpy smiled, happy to be nearly done.

“Good for you, Spud.” She patted the cat, from whose mouth dangled a mouse tail.

With the rotten bags cleared, Limpy only needed to scrape the guck off the dirt floor. A shovel with a heart-shaped spade rested against the crumbling stone wall near a stack of burlap sacks and several balls of stitching twine. The skin of Limpy’s hands had roughened with her frequent use of shovels and needles.

Tough hands are an honest life’s work, Mother said in the darkness.

“Yes, Ma,” Limpy muttered, and she struggled to hold back sudden tears. If her hands were so calloused now at thirteen, how would they be at twenty, or forty, or sixty? Her father’s fingers were like the rock outcroppings that studded the hills along one side of the farm. Would she ever be free of the farm? How? When? Who would ever buy a cursed farm? Her art would never be good enough for a Hillcrest scholarship. Her fears choked her. They overwhelmed. She hung over the shovel handle and drew deep breaths.

Something rattled in the blackness. Limpy froze, breath held tight in her chest. She listened, trying to hear past the throbbing of blood in her ears.

She scanned for the source of the sound, but found nothing. It hadn’t been a cat. She’d felt the rattle in her toes. And she couldn’t shake the weird thought that something had responded to her fears. The rattle didn’t come again and she finally returned to her shoveling, and to the roughening of her palms.

Thin moonlight eased through the window now as she filled an empty potato sack with the gross earth. She dug until the blade chipped into hard clay. Over the nearly two decades her father had owned the land, the family had carved the cellar floor a good six feet lower, raising the ceiling and requiring an ever-lengthening ladder. Sometimes her father would say, go get us a little closer to China, and she knew he was talking about potato bag moving. Every time she moved the bags she dug the cellar another inch deeper. Maybe in another dozen years she could reach China, digging a tunnel like a prisoner digs under the prison wall—and escape.

The shovel chinked on stone. She worked around the rock until the shovel struck again, this time setting off a spark. She blinked in the afterglow. It wasn’t a stone as she had first thought. Whatever it was had a sharp corner, like a box. But that made as much sense as digging to China.

Just then her brother hollered.

The deep, bone-aching fatigue that killed her will to study, to read, to create, drew her step over step up the ladder. When she reached the top, she heard another rattle. A something-against-wood kind of rattle.

She paused and stared back down.

In the slender rectangle of moonlight, the box corner protruded from the earth. It shook. Somewhere a door slammed. Her brothers and father were off to bed. And already her father’s snores accompanied the cicadae.

Michael F. Stewart is winner of both the 2015 Claymore Award and the 2014 inaugural Creation of Stories Award for best YA novel at the Toronto International Book Fair.

He likes to combine storytelling with technology and pioneered interactive storytelling with Scholastic Canada, Australia, and New Zealand’s, anti-cyberbullying program Bully For You. In addition to his award winning Assured Destruction series, he has authored four graphic novels with Oxford University Press Canada’s Boldprint series. Publications of nonfiction titles on Corruption and Children’s Rights are published by Scholastic and early readers are out with Pearson Education.

For adults, Michael has written THE SAND DRAGON a horror about a revenant prehistoric vampire set in the tar sands, HURAKAN a Mayan themed thriller which pits the Maya against the MS-13 with a New York family stuck in the middle, 24 BONES an urban fantasy which draws from Egyptian myth, and THE TERMINALS–a covert government unit which solves crimes in this realm by investigating them in the next.

Herder of four daughters, Michael lives to write in Ottawa where he was the Ottawa Public Library’s first Writer in Residence. To learn more about Michael and his next projects visit his website at www.michaelfstewart.com or connect via Twitter @MichaelFStewart.

Michael is represented by Talcott Notch.