**SPOTLIGHT, EXCERPT & GIVEAWAY** Do Not Forsake Me by Rosanne Bittner

Do Not Forsake Me 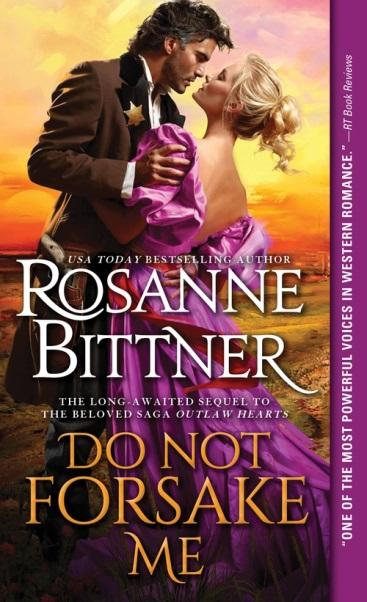 Fate brought them together. His past may tear them apart.

Miranda Hayes’ life was changed the day she faced down infamous gunslinger Jake Harkner…and walked away with his heart. Their fates have been intertwined ever since. Hunted by the law, fleeing across a savage land, their desperate love flourished despite countless sorrows. Now, twenty-six years later, their family has finally found some measure of peace…balanced on the knife’s edge of danger.

Jake has spent his years as a U.S. Marshal atoning for sins, bringing law to the land he once terrorized. But no matter how hard he fights the demons of his brutal past, the old darkness still threatens to consume him. Only Miranda keeps the shadows at bay. But when outlaws looking for revenge strike a fatal blow, Jake risks losing the one woman who saw past his hard exterior and to the man inside.

He always knew there’d be the devil to pay. He just never realized he might not be the one to bear the ultimate price.

This July marks the release of Do Not Forsake Me, Rosanne Bittner’s long-awaited sequel to her beloved title Outlaw Hearts. To celebrate, we’re pleased to welcome father and son Jake and Lloyd Harkner, who have agreed to sit down with us today to answer a view questions about their relationship and the impact it has on this latest release.

Name one thing on your father’s/son’s bucket list.
JAKE: I think Lloyd would secretly like to be a rodeo bull rider.
LLOYD: If he could, my father would build a castle for my mother and treat her like a queen.

In this excerpt Jake has been gravely wounded and Randy has been through the hell of thinking she was losing him. She is talking with a reporter who wants to write about Jake.
“Ma’am, if I may ask … how do you do it?” Jeff asks.
“You’re a mother, a grandmother, and wife to a man who has to be difficult to live with.”
Randy glanced at Jake’s guns lying on the table.
“No one understands my husband the way I do, Jeff.  No one.  I know every detail about his life, including when he was a little boy. I know how he thinks and what his needs are. I know how he suffers silently on the inside. That’s how I do it.”  She wiped at her eyes.
“Jake has a good heart. He treats me with total devotion and respect, so no, he’s not difficult to live with.  We’ve had some really bad times, a couple of them a big test of our marriage, but deep down I’ve always known how much Jake Harkner loves and needs me.”
She seemed to be in another world for the moment.  “And years ago, not long after we’d met and then gone our separate ways, thinking it was best because he was a wanted man, Jake rode out of my life and I headed west to find my brother.  The people I traveled with left me at a trading post when they thought I was dying from a snakebite, and the men at the trading post were … awful.  I was in terrible pain, sure I was dying … and one day I heard Jake’s voice, felt him lift me into his arms and promise me he’d never let me out of his sight again. He’d tracked me down and come back for me. I remember how gentle he was when nursing me back from death, bathing me, feeding me, keeping me warm … and never once did he take advantage or touch me wrongly. I knew then all I needed to know about him.  I fell totally, deeply, madly in love with the real Jake Harkner.”