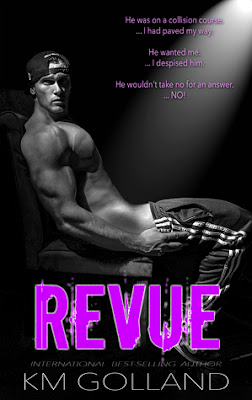 *I received an ARC in exchange for an honest review*

Holy hell in a hand basket!!! This book blew my frickin mind!!!
How hot is that cover?! Seriously!!!

Believe me when I say, what lays inside is even hotter!!!

I seriously don't even know where to start, all I can think about is picking up my ipad and rereading this bad boy again and again! I was hooked right from the first page and couldn't put it down till the very end. ^_^

We meet Corinne, a freelance photographer who's been asked to cover for her brother and go on tour with the Wild Nights Revue (wolf whistles). She's really not happy about it even though this is every women's fantasy come true. Just too much testosterone for one woman to handle!

Her first night doesn't start off so well when she discovers one of the boys (Josh) backstage getting dirty with some random. But who could walk away from a live show? Right? haha!
After this, Josh seems to seek Cori out and is determined to make her one of his conquests, Cori is seriously not interested in being another notch on his bed post.

The chemistry between Cori and Josh is smoldering hot, you'll get the whole sweaty palms, heart racing, panty wetting experience. ;-)

I loved how Cori stuck it to the guys, she's not a pushover and she definitely will let them have it. But she's also (like every other woman) wants to scream and go guy crazy when they're in their game preforming. Or they just have their shirts off, but she's too ladylike to admit it.....out loud. ^_^

With a wild and fun storyline, dirty mouthed and crazy lovable characters, this story is definitely one in a million.

Want to experience a little Thunder from down under? or in this case Wild Nights Revue?
Than go grab yourself a copy, get real comfy and dive right in and join the fun!


I'm just going to leave this here, it may entice you more to pick up a copy of this book......

Because I loved this book so much I'm going to giveaway two kindle copies.

To enter just leave a comment with your email addy so I have a way to contact you if you're our lucky winners. And answer this question...

What is the hottest book you've ever read?


After all that, maybe I'll go watch the Magic Mike XXL trailer again... excuse me....