Hey all, welcome to our stop on the Texas Cowboy blog tour.

We have a guest post with the two lovely authors, so make sure to check it out and also enter the giveaway before you go. 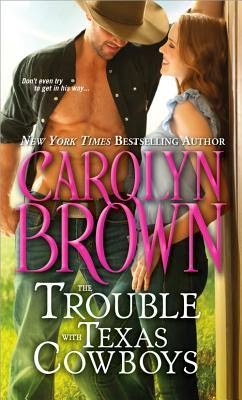 Can a girl ever have too many cowboys?
No sooner does pint-sized spitfire Jill Cleary set foot on Fiddle Creek Ranch than she finds herself in the middle of a hundred-year-old feud. Quaid Brennan and Tyrell Gallagher are both tall, handsome, and rich...and both are courting Jill to within an inch of her life. She's doing her best to give these feuding ranchers equal time-too bad it's dark-eyed Sawyer O'Donnell who makes her blood boil and her hormones hum...
Buy Links
Amazon | Barnes and Noble | iBooks
Author Bio
Carolyn Brown is a New York Times bestselling author with more than sixty books published, and credits her eclectic family for her humor and writing ideas. Carolyn was born in Texas but grew up in southern Oklahoma where she and her husband, Charles, a retired English teacher, make their home. They have three grown children and enough grandchildren to keep them young.
Author Links
Website | Facebook | Goodreads 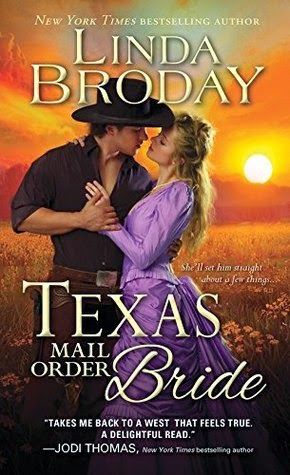 Rancher Cooper Thorne thinks his life is finally on an even keel. But when mail-order bride Delta Dandridge steps off the stagecoach and claims he sent for her, he scrambles to set her straight. The tempestuous woman makes him see red and also challenges all his vows to remain a bachelor. It turns out Delta Dandridge is going to set Cooper Thorne straight about a few things...
Buy Links
Amazon | Barnes and Noble | iBooks
Author Bio
A New York Times and USA Today bestselling author, Linda Broday writes western historical romance. She lives in the Texas Panhandle on the Llano Estacado where the American Indian and Comancheros once roamed. She’s always been fascinated with cowboys and the American West way of life because to her these men and women embody strength. Her desire to keep history alive is what drives her to write unforgettable characters.
Author Links
Website | Facebook | Goodreads


They are tough, hard working, and have the manners their mama gave them. Is it no wonder that readers are in love with the ultimate hero — cowboys. Today we’ve got Western romance authors Carolyn Brown and Linda Broday to reminisce about the very first cowboy romance they ever read and the lessons they learned that they use in their own stories. Take it away ladies!
Carolyn Brown: I have been reading westerns for so long I can’t remember my first western but I do remember my favorite one. That would be Hummingbird by LaVyrle Spencer. Abigail had two men living in her house. One upstairs. One downstairs. One had been shot by the other and she was nursing both back to health. The salesman downstairs called her Abigail and her mind told her that he was the one who would give her stability. But, oh my, that one upstairs that called her Abby put an extra beat in her heart and made her pulse race. This story taught me that the heart and the mind do not always agree, as was the case with my newest heroine Jill and those three cowboys in The Trouble with Texas Cowboys. Her mind told her that either the Brennan or the Gallagher cowboy could give her stability. But her heart yearned for Sawyer, the cowboy who didn’t have anything material to give her at all.
Linda Broday: The first western romance book with grit I ever read was Angel by Johanna Lindsay and I was hooked. It’s about a ruggedly handsome hired gun with eyes as black as sin that everyone calls “Angel” because they see him as the Angel of Death. He was such a wounded alpha hero and even after all this time (since 1992) I can’t forget him. I’d read Johanna Lindsey for many years and loved her pirates and Englishmen but this book rose above the rest on many levels and it resonated with something deep inside me. I learned that people can change and they can find redemption no matter what they’ve done if they put forth the effort. I also learned that love always wins.

Most of the western romance I’d read up to this point were fluff with no real meat. I wanted realism and depth and the way the West really must’ve been. After I read Angel I knew I wanted to write western romance. I wanted to write realistic, gritty stories that tell of the immense struggle it was to settle the wild land. It took men with strength and courage, men who wouldn’t quit. So I sat down and wrote Knight on the Texas Plains and many others. But I’m most proud of my Bachelors of Battle Creek series. The first book, Texas Mail Order Bride, features rancher Cooper Thorne, the oldest of his blood brothers. He's the founder of the Battle Creek Bachelors Club and has vowed to never marry because of his horrific past. He’s happy being a bachelor, at least until Delta Dandridge steps off a stagecoach claiming to be the bride he sent for.
Giveaway