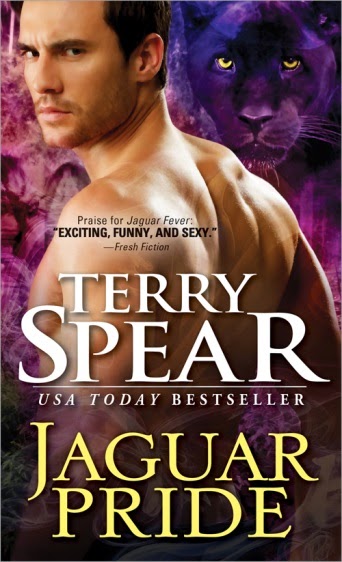 JAG Special Forces agents Huntley Anderson and Melissa Overton are hot on the trail of poachers when they’re suddenly saddled with two jaguar shifter cubs. They have to locate the parents, pronto—but who’s going to babysit in the meantime?

A lifetime of possibilities…

Huntley is a rough, tough jaguar shifter and an all-business agent, but he’s not going to let two abandoned youngsters come to any harm on his watch. Seeing her super-manly partner try to get the playful cubs under control stirs up some unexpected desires in Melissa, and she begins to feel like Huntley’s not the only one who’s in over his head…

USA Today bestselling author Terry Spear has written over fifty paranormal and medieval Highland historical romances. In 2008 Heart of the Wolf was named a Publishers Weekly Best Book of the Year. A retired officer of the U.S. Army Reserves, Terry also creates award-winning teddy bears that have found homes all over the world. She lives in Crawford, Texas.

Once inside the park, Melissa and Huntley trekked for miles, not seeing much of anyone or anything, not with the way the rains were coming down in torrents in the steamy rainforest. They hadn’t found any sign of Jackson. Just a few hikers, hardier than most, who endured the rains and mud to see glimpses of wildlife here and there. When Melissa and Huntley finally set up camp for the night, she felt wet and miserable. And she couldn’t believe how Huntley looked like he could go on for several more hours when she was totally beat.
She should have regretted not sleeping more last night. But making love to him was what she’d needed. Not that she thought anything permanent was likely to come out of the relationship.
Just the same, she’d needed to feel sexy and wanted and loved. Huntley gave that to her and more. So when he’d wanted more, she just couldn’t say no, despite knowing that she needed a good seven hours of sleep to feel normal the next day.
She was thinking of Jackson and how he had slipped away from them the first time. She hoped they’d find him soon. Then gunshots fired off in the distance.
Her heart skipped a couple of beats.
“We don’t have time to take down the tent. Do we go as humans or jaguars?” Huntley quickly asked her.
She loved that about him—how he always included her in the decision making. “If they’re rangers or police, I want to go as humans. Even if they’re poachers, I think we’ll be safer if we look like we are ‘tourists.’ We can always shift when we get there if we need to.”
“Sounds good.”
At least they were armed with tranquilizer guns this time.