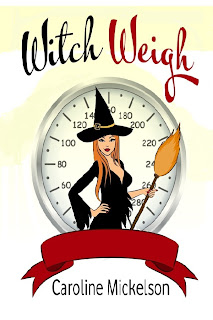 Tessa Von Hellengaard is a real witch.
Magical spells aside, she’s snarky and selfish, and the other witches in her silent spell coven are fed up with her. Their plan to reform Tessa involves taking away her magic, saddling her with one hundred extra pounds, and sending her to a weight loss spa. For good measure they call in Liam Kennedy, a charming and sexy fairy godfather, to teach her some manners. Desperate to regain her magic and determined to shed the weight, Tessa soon realizes that protecting her heart from Liam will prove to be her greatest challenge.

Caroline Mickelson loves her family and loves to write.

She also loves a good adventure, among her favorites thus far were attending graduate school in a Scottish castle, riding a camel around the Pyramids in Giza, and taking a best in a life time road trip to Graceland. Caroline lives in the American southwest with her husband and their four children, affectionately known as The Miracles.


Excerpt
“I do have one question.” She twirled her beer bottle as she spoke, without taking a second sip. “If you’re my fairy godperson, aren’t you supposed to grant me three wishes?”


He laughed. He couldn’t help it. She was so clueless.


“No, that would be a genie, a different game altogether.” He took one last swig of beer and set the empty bottle on the table. “But, just for the sake of conversation and getting to know each other, tell me what your first wish would be if I were your genie.”


“If I can. Go ahead, your reasonable wish is my command.”


Tessa suddenly looked as satisfied as a cat with a canary’s feather in its teeth.


That certainly wasn’t what he was expecting to hear. Contessa Von Hellengaard was a witch in a million. Someone at Fairy Godmother Inc. had done him a good turn indeed when they’d assigned Tessa’s case to him. Of course, they’d likely just wanted to pass the buck after reading her file.


He stood and pulled his t-shirt off over his head.


The look on her face was priceless.


He watched her eyes wander over his body. He didn’t feel the least bit self-conscious. Not after the hours he put in at the gym every morning. It was actually nice to have his hard work appreciated.
“Turn around.” Her voice sounded far less imperious than usual.
He did as she bid. He knew what she was after and it wasn’t her first fairy experience between silk sheets with him. She was looking for wings.
He was more than happy to give her an eyeful.

Thanks for stopping by!
HAPPY READING!!
Posted by Stacey at 12:00 AM