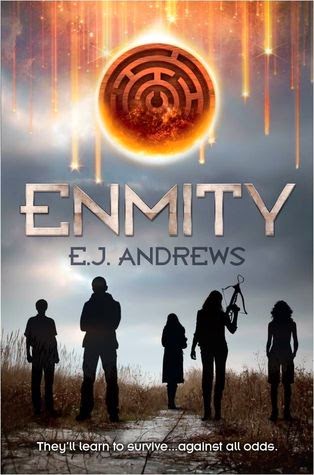 Review copy provided by the publisher.

Blurb- Love vs Life.
Good vs Evil.
War vs Warfare.

Which would you choose?

After a solar flare wipes out most of the world’s inhabitants, it leaves behind nothing but a desolate earth and a desperate population. Existence is no longer a certainty. And with factions now fighting for the power to rule, people start to become reckless with their lives. The world has become a dangerous place.

Amongst the ensuing chaos, Nate and Hermia — two victims of the new world order — are taken against their will to The Compound. Joined by eight other teenagers all chosen for a specific reason, Nate and Hermia are forced to train as assassins to overthrow the current president and make way for a new leader of the free world. Here, they learn to plan, fight, and most importantly... to survive.

Except, despite the casual cruelty of their new existence, both Nate and Hermia — two very strong but very different people — begin to form fragile bonds within the group. But they soon realize their happiness is short lived...because their training is just the beginning.

A war awaits...regardless of how ready or willing they may be.

Review- When I first received Enmity and read the blurb I was quite excited to read it. It sounded fast paced, exciting and full of action.

It was anything but.

It started out pretty good. A prologue that drew me in with it's fast pace and a character in hysteria due to the impending solar flare that would change the world as she knows it. Abandoned by her parents and left to bunker down alone, hoping for survival.
We are then into the story. Following Hermia and Nate, alternating between their points of view, never to hear of the character from the prologue again. Which had me questioning what was the point of her? It didn't really make sense to me. I was hoping to find out what had happened to her but never did.

The rest of the storyline is fairly confusing. Hermia and Nate are kidnapped and taken to a compound to be trained and used to kill their captors enemy. There isn't much of an explanation as to who is running the new world or why and how the world got to the way it is.  I found the whole story to lack depth and meaning. I couldn't fully invest myself into it because it was hard for me to establish a decent connection to it and it's characters. It really was a let down. The concept is great but the delivery needs work as well as more insight and definition.

If you want to try it out for yourself it is available to purchase in any good book store throughout Australia or online through the following links:
AMAZON
THE BOOK DEPO
HARLEQUIN