**BOOK BLAST** Once is Never Enough by Delilah Devlin 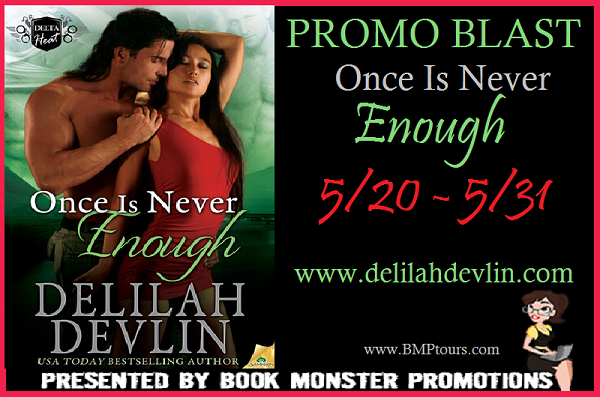 
Excerpt
Mondo didn’t know until that moment exactly how much he wanted her. Her sweet words, her moist green eyes, drew him closer. He stepped forward, reaching for her, knowing this wasn’t the right way to proceed if what he intended was simply training, but unable to resist the urge to give her reassurance and himself the pleasure of her skin beneath his fingers.
Her mouth opened, the plump bottom lip trembling on her indrawn gasp as her nipples touched his chest. Even through the cotton garment he wore, he felt the prick of the engorged points, and his groin tightened.
Her courage was beautiful, her desire mirrored in her green eyes. She’d endured exposure, his public caresses, and yet she was all but begging for more.
With one arm encircling her back, he pressed her closer, letting her feel his cock as it hardened. He cupped her cheek, swept a thumb across her bottom lip and bent his head until his forehead touched hers.
So close their breaths mingled, he sighed. “I must tell you. I want to be more than your teacher.”
Her eyes widened. “Pansy said that a Dom’s instructions can be entirely free of intercourse. That the encounters are often more about exerting control and giving up power to another than about sex.”
“Yes, I usually train from a distance. If I was to be simply your teacher, my touches would be confined to impersonal ones—those giving punishment or for gauging your body’s reactions. Yes, you are vulnerable, and there can be orgasms, but I usually choose not to engage in sex with my subs. My pleasure is confined to watching them grow and flying free of their inhibitions.”
“She said you like to inflict pain,” she whispered. “I’ll admit now, I don’t fully understand how that is a good thing. How you can be driven by a need to inflict pain and your sub be grateful for the abuse.”
Tenderly, he framed her face. “It’s not abuse. I never give more punishment than a sub can take, but it takes concentration, and the ability to read the signs so I know how far I can push. You’ve never experienced this before, but there is pleasure in pain. A release of endorphins that will steal your inhibitions.”
“That’s what you would like to show me?”
“Yes.”
“But you won’t be doing it from a distance.”
“No, I would like to make this intimate. Our journey. And I would like to make love to you.”
She closed her eyes. “I almost wish you wouldn’t talk. That you’d just take.”
“If that is how you would like to play, I can oblige.”
The silkiness of his tone was so seductive, she shivered. “Would you think I’m foolish if I say I don’t want you to be easy with me?”
“I’d say you don’t know your limits. Not yet. But if you will give me your trust and do everything I say, I’ll give you the greatest pleasure of your life.”

Until recently, award-winning romance author Delilah Devlin lived in South Texas at the intersection of two dry creeks, surrounded by sexy cowboys in Wranglers. These days, she’s missing the wide-open skies and starry nights but loving her dark forest in Central Arkansas, with its eccentric characters and isolation—the better to feed her hungry muse!
For Delilah, the greatest sin is driving between the lines, because it’s comfortable and safe. Her personal journey has taken her through one war and many countries, cultures, jobs, and relationships to bring her to the place where she is now—writing sexy adventures that hold more than a kernel of autobiography and often share a common thread of self-discovery and transformation.
Delilah Devlin is a prolific and award-winning author of erotica and erotic romance with a rapidly expanding reputation for writing deliciously edgy stories with complex characters. Whether creating dark, erotically-charged paranormal worlds or richly descriptive historical stories that ring with authenticity, Delilah Devlin “pens in uncharted territory that will leave the readers breathless and hungering for more…” (Paranormal Reviews) Ms. Devlin has published over 100 erotic stories in multiple genres and lengths.
She is published by Atria/Strebor, Avon, Berkley, Black Lace, Cleis Press, Ellora’s Cave, Harlequin Spice, Kensington, Running Press, and Samhain Publishing.