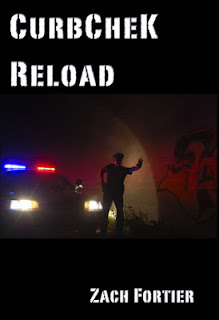 Blurb- Curbchek-Reload is a darker account of the streets as they were worked by Zach Fortier, a dangerously deranged cop. Welcome back to the inner city and the twisted mentality of Zach Fortier. Patrolling the streets, broken and mentally damaged from years of urban violence, Zach fights a losing battle to maintain a hold on reality. Join him in the passenger seat of a police cruiser for more of the darker and meaner side of life: The inner city. In Curbchek-Reload you get a front row seat to an attempted murder of a cop, suicide attempts, rapes, and DARK cop humor. Curbchek-Reload - Fasten your bullet proof vest and buckle your seat-belt, it is gonna be a wild ride!

Review- What an introduction to the life of an American Cop! CurbChek- Reload is a book full of  events that Zach Fortier has experienced during his time as a Police Officer. It was like reading episodes of Law and Order and let me tell you, he didn't hold back on the details at all! The gruesome true stories were a shock to the system as he recalled every single detail of the horrific events he encountered ranging from drug related crimes to rape crimes and everything in between.

Zach Fortier is a copper who seems to like going solo. Going on calls alone unless its absolutely necessary for back-up. He is also the type that will do the morally right thing as oppose to what the system thinks is right. In other words he's not a dick who flaunts his badge. He's the type of cop that you can respect.

Throughout the book I found myself having all kinds of reactions and feelings with every story he told. I was shocked, disgusted, appalled, and sad. Add in the fact that these are all true stories, makes it all the more worse. It's definitely cementing the fact that humans are one effed up race.

One thing that stuck out most was how Zach handles each and every call-out he gets. He's professional yet takes things personally. He has a tough skin on the outside but still has feelings. I don't know how he does what he does. I sure couldn't do it! So thank-you Zach for opening my eyes to what really happens out there in the real world.

Crime novels aren't usually my pick of genre but I am so glad I read CurbChek- Reload. It was a real eye opener that I could not put down. I would recommend to anyone who can handle raw and honest stories. Really not a book for the softies.


CurbChek- Reload is available to purchase in Paperback and Kindle on AMAZON and is also available at THE BOOK DEPOSITORY.

For more information on Zach and his other projects you can check out the following:
BLOG
GOODREADS
FACEBOOK