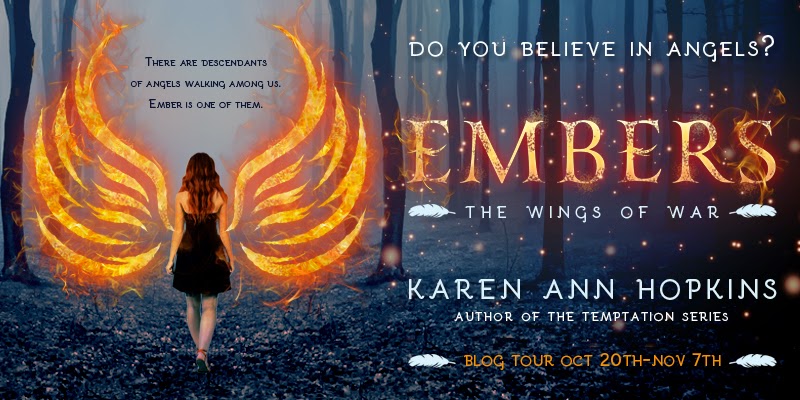 Welcome to our stop on the Embers blog tour. We have another amazing book for you all to add to your TBR lists. Below is my review for Embers (yay!) and make sure to enter the giveaway, some awesome prizes up for grabs. ^_^

There are descendants of angels walking among us. Ember is one of them. And she may be the only hope mankind has as the rapture approaches and evil rises.
Embers is an epic paranormal adventure about an eighteen year old girl who discovers that she's immune to fire and any other injury when she’s in a horrific car crash that kills her parents. Following a violent episode with her aunt's boyfriend, Ember flees Ohio to live with an old relative in the Smoky Mountains of Tennessee. Ember's exuberance at escaping a bad home life soon turns to trepidation when she finds out that she's a Watcher, a descendant of angels. While Ember learns about her heritage and the powers that go along with it, she strikes up friendships with two young men who live in a frightening walled compound in the forest. Inexplicitly drawn to one of the men in particular, an impossible romance develops. But it is cut short when Ember discovers that her new friends are fighting on the opposite side of a war—one that’s been raging between two factions of Watchers for thousands of years. When the compound’s inhabitants threaten the townspeople, Ember takes action, sealing her fate in the ancient battle of good versus evil—and the grayness in between. Ember is up to the challenge, until she realizes that she isn’t only fighting for the lives of the locals and the souls of her new friends. She also might be one of the few champions who will make a stand for all of mankind as the rapture approaches and the end of days begin.
Embers is a dark and gritty YA novel that’s the first book in the series, The Wings of War.
ADD ON GOODREADS
Purchase
Amazon | Amazon AU | Barnes & Noble


My Review:
I'm a huge fan of Hopkins work and when I saw she was releasing a new story, I was instantly excited and intrigued to read it. I fell in love with the Temptation series and am so happy that I now have a new series to love. Also, absolutely loving this cover! I'm a sucker for gorgeous covers lol.

Embers is about a teenage girl who is a little different to everyone else. Surviving a massive car accident which killed her parents, Ember has been living with so much guilt and wonder, the wonder of how she survived and her parents didn't. At the funeral of her parents the priest seeks her out to deliver a message he says came to him from an Angel, Ember doesn't know what to believe. She slowly sees the pieces of what the Priest told her come to be, one being to trust fate... Fate brought her to Ila, an elderly lady who can help her become who she was meant to be.

As always Hopkins brought such an in-depth feel to the characters, makes it easy to grow attached to them. Each description was so detailed that you could see everything before your eyes, felt like you are there experiencing it all with Ember. Definitely a page turner, I was glued till the very end. And by the end you're left wanting so much more! One of those "I NEED THE NEXT BOOK NOW" sort of moments lol.

All in all an amazing story that I highly recommend to those paranormal, Angel book lovers. I look forward to the next installment in this series. 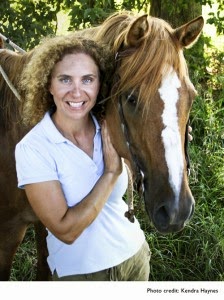 A native of New York State, Karen Ann Hopkins now lives with her family on a farm in northern Kentucky, where her neighbors in all directions are members of a strict Amish community. Her unique perspective became the inspiration for the story of star-crossed lovers Rose and Noah. When she’s not homeschooling her kids, giving riding lessons or tending to a menagerie of horses, goats, peacocks, chickens, ducks, rabbits, dogs and cats, she is dreaming up her next romantic novel.

Website | Blog | Twitter | Facebook | Goodreads
Giveaway
There are several giveaways accompanying this tour. One winner will receive a $100 gift card, another will receive a signed Temptation Series book set, including Temptation, Belonging & Forever, and ten lucky winners will receive an eCopy of EMBERS!
Please enter via the Rafflecopter form. Giveaway is open internationally for the gift card and eCopies and US/Canada for the book set!

Friday, October 24th A Dream Within A Dream & Becoming Books

Monday, October 27th The Avid Reader & Lost in Ever After

Thursday, October 30th Curling Up With A Good Book & Coming at YA

Friday, October 31st Actin' Up with Books & To Each Their Own Reviews

Friday, November 7th Books in the Spotlight & Her Book Thoughts!