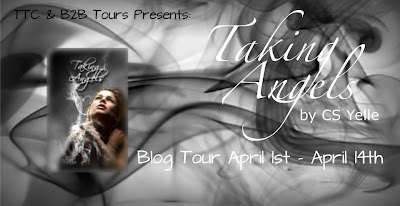 Hey all, we're the next stop on the Taking Angels blog tour. We have an awesome interview with the amazing author, a spotlight and don't forget to check out the giveaway. :-)
Spotlight
Taking Angels
by CS Yelle
Release date: 26th March 2013
Published by: Staccato Publishing
Genre: New Adult 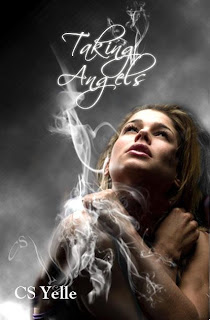 Britt Anderson went along with everything the doctors said for nearly four years, but she was still dying at eighteen. The cancer had won leaving her without a future, without any options, and without control. No control, except for how she would leave this world. As Britt tries to end her life by going into the frigid waters she realizes her mistake. She struggles to get back to shore, to cry out for help, but her atrophied muscles are useless and the frigid water steals the breath from her chemo-scarred lungs. Despite her father’s attempts to reach her, she flies over the waterfall.
When Allister Parks finds Britt’s fragile body on the riverbank something calls out to him. Ignoring the warnings of his sister, Allister brings Britt back from the edge of death. The only problem is that an Eternal like Allister isn’t allowed to touch those who have already passed from this world. It is forbidden; an infraction punishable by death.
As Britt relishes her new cancer-free life and senior year of high school, her very existence threatens Allister’s place in this world. Allister struggles to keep Britt a secret from the Eternal Council and out of the hands of the only Eternal who already knows the truth: the one who stole her guardian angel.

C.S. Yelle
C.S. Yelle was born and raised in Grand Rapids, MN, the "almost" middle child of six. He attended Grand Rapids Senior High School where he enjoyed music and sports. He received his BS in Chemistry from Mayville State University, Mayville, ND in 1987. He taught 7-12 Science and coached for six years in several North Dakota schools and currently works as an Executive Account Manager in the Water Treatment Industry where he has been for nearly seventeen years. He is the father of four and grandfather of one. He writes novels, screenplays, and an occasional short story. He has been writing seriously for over ten years and plans to continue until his fingers are unable, maybe longer. He currently resides in a Minneapolis, MN suburb with his wife Jennifer.
Stalker links

What or who inspired you to become a writer?
After reading a Terry Brooks novel, I felt motivated to create a story of my own. Years later after that work sat in a box for many years, my wife Jenny spotted it and told me I needed to finish it.

Who is your favorite Author & what is it that really strikes you about their work?
Terry Brooks and his Sword of Truth Series. He has a wonderful balance of action and character development that inspire me to do better.

What was your favorite chapter to write and why?
Chapter 18. It is where Britt and Kendal really get to the heart of what is driving Kendal and his feelings for her. It is a pivotal point where Kendal becomes more human in my eyes.

What was the most surprising things you’ve learned in writing your book?
How I have been able to reach inside and pull out emotions and feelings that people can relate to. This book has broadened my writing scope immensely.

Do you ever experience writers block?
The real world often infringes on my writing world and daily stresses can just keep me out the right frame of mind to write.

What is the last book you read?
My Demonic Ghost by Jacinta Maree

If you could trade places with any other person for a week, famous or not famous, living or
dead, real or fictional. With whom would it be?
Steve Job. To be able to see from his point of view would really be fascinating.

What do you like to do when you're not writing?
I love movies, so I guess I try to watch as many movies as I can in my spare time. All types of movies. I want to sample the good, bad, and the ugly.

Is anything in your book based on real life experiences or purely all imagination?
The location is the only reality in my book. Grand Rapids, MN and the other towns in Northern MN are real. The characters are always fictional, based on a combination of various people I have met throughout my life, but not really having too much of one person.

As a child, what did you want to be when you grew up?
Professional Baseball Player.

If Hollywood made a movie about your life, whom would you like to see play the lead role
as you?
Ryan Reynolds.

Is there anything you’d like to say to your readers and fans?
All authors start with a story that moves them. The real amazing thing for an author is when their story moves others. Fans Rock!