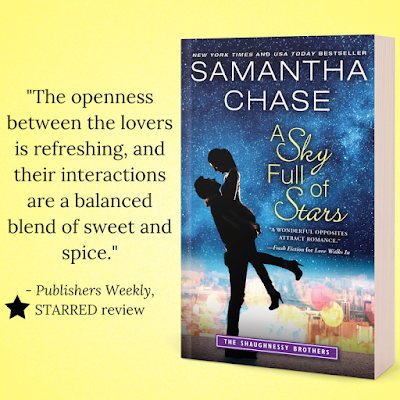 The stars are about to align in the newest Shaughnessy brothers romance! 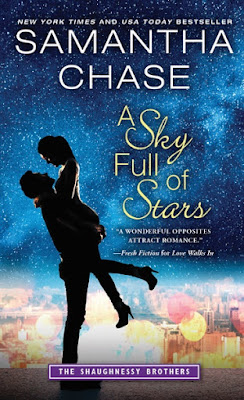 Brilliant astrophysicist Dr. Owen Shaughnessy feels more connected to the cosmos than to people. He’s great with calculations, but when he leads a team of scientists to study a famous meteor shower, he doesn’t factor in his free-spirited artist assistant Brooke Matthews.

LOVE CAN DAZZLE YOU

Polar opposites in personality, the friction between them threatens to derail the project. But the beauty and mystery of the night sky draw Owen and Brooke together—and she’s going to surprise him in ways the stars never could.

“I never thought I’d see those two mediums used together.”

“I may have to stab my own eyes out to make sure I never see it again,” Brooke said and then shuddered. They had just left the art gallery, and she waited until they were at the corner before looking at Owen. “I am so sorry.”

He looked taken aback by her apology. “Why?”

“That was horrible! Everything in there was offensive and tasteless and just…wrong! I can’t believe an art professor would recommend that to anyone!”

“Maybe he didn’t know exactly what kind of art was being displayed.”

Brooke shook her head. “He had to know. He raved about the whole thing—like he was familiar with the kind of work this guy did!”

“Maybe he’s into that kind of thing. There were a lot of people there who were praising pretty much everything they saw.”

Even though she knew Owen was right, she was still horrified. All of the pictures featured nudes in cages—and then there was wire caging coming out of the picture to give it a 3-D effect. Splashes of color looked as if they were just thrown onto the canvas, and all in all the exhibit had been fairly horrific to her. Brooke didn’t consider herself a prude, but these images were definitely not something she would have chosen to see.

And now she was mortified because she had invited Owen along. To his credit, he didn’t seem the least bit fazed by the whole thing. It was possible he was trying to be polite and didn’t want to offend her in case she found the work interesting. But after the first five minutes of being there, Brooke had wanted to escape. Somehow, however, Owen had drawn her into conversation as they walked around the gallery and made several observations that had her wondering if he really didn’t see what was so…bizarre about the entire thing.

And that had been eye-opening for her. They stayed much longer than she’d imagined they would—especially after seeing the art—but they had talked the entire time, and after a while, she didn’t even notice their surroundings. She simply enjoyed the conversation, which turned to the architecture of the building rather than the show.

“So that was an art showing,” Owen said conversationally.

She nodded. “I really wish it had been a better experience.”

“Is this the sort of thing you want to do? Have your paintings displayed in one particular gallery?”

“I think so. That was one of the reasons I went to talk to Dr. Kennedy. I really wanted his input on ways to get my name out there to some of the local galleries. I was hoping he’d give me some insight into how to get started.”

“I don’t know about you,” she began, “but the thought of walking back to the pier is just a little exhausting. Would you mind if we grabbed a cab?”

“Not at all.” Walking to the curb, he quickly hailed one, and once they were inside, he instructed the driver where to take them.

“Thank you,” Brooke said, resting her head back on the seat. “I know I could have made the walk, but I’m just worn out.”

“It was a lot of walking,” he agreed. “I’ll have the driver drop you at your car and take me back to my hotel.”

Turning his head toward her, he looked at her until she met his gaze. “What’s wrong?”

She shrugged. It was silly to be disappointed. Looking at the clock on the dashboard, she knew it was late—almost midnight—but she wasn’t ready for the night to end.

“I just thought I’d drive you back there, and maybe we could have a drink or something before we called it a night.”

He studied her for a moment, and she was afraid she had been too forward and he was going to turn her down.

“I’d like that,” he said, surprising her yet again.

The ride to her car took only a few minutes, and Owen paid the driver and thanked him as they climbed out. Silently they walked to her car, and for the first time that night, she truly felt nervous. There wasn’t anything she could put her finger on, but for some reason Brooke knew it was a big deal that they were out together tonight and they were both unwilling to let the night come to an end.

Or perhaps she was seeing only what she wanted to see.

They stopped next to her car, and she turned to him. “I don’t think I know what hotel you’re staying at.”

“It would probably be easier for me to drive. That is…if you don’t mind.”

Brooke willingly handed him the keys, and they were on the move minutes later. Traffic was a little bit lighter than it had been earlier in the evening but still heavier than she would have expected for this time of night. Everything was lit up, and the sidewalks were still crowded, and she loved the energy of it all. They turned off the main road, and Owen pulled into an underground garage and parked.

“I was so busy people-watching I didn’t even notice where we are.” There was a possibility that was the wrong thing to admit to, but…

“That’s okay,” he said, taking the keys out and handing them to her. Neither made a move to get out of the car though.

She watched him for a moment—noticed how he was staring at the steering wheel and how he seemed to be thinking about something but she had no idea what. Turning in her seat, she faced him. “Owen—”

Her eyes went wide, and her heart beat madly in her chest. “You…you would?”

Owen looked at her, his dark eyes so full of emotion. He shook his head. “I’m sure there was a more eloquent way to say that, but…I’m not very eloquent,” he added quietly.

Reaching out, Brooke took one of his hands in hers—relishing the warmth she found there—and marveled at how large it was. And there was strength there. He didn’t have the hands of a man who sat behind a desk pushing papers around, and the skin-on-skin contact was far more arousing than she thought possible. “You’re more eloquent than you think you are,” she said softly.

The look he gave her said he didn’t quite believe her. “I had a wonderful time with you tonight, Brooke, and I know we’re going to go inside and have a drink, and we’ll talk some more and…well…the longer we talk and the later it gets, it’s going to make me want to kiss you even more. It’s wrong for me to want to, but—”

“Why is it wrong?” she interrupted.

And there were those eyes that had her more than ready to crawl across the seat and into his lap. There was a vulnerability in his eyes that was almost her undoing.

“I hurt you. I know you didn’t say anything about it, but I know Howard probably talked to you and told you about Red Rock.” He looked away and shook his head. “It was wrong of me to do it like that. I should have talked to you myself. I’m sorry.”

“Owen, I’m not going to lie to you. I was hurt, and yes, I was pretty angry with you earlier. I know we haven’t known each other very long, but I thought we were at least becoming friends. I hated hearing about your decision from my uncle, but…I kind of understand why you did it that way. I’m sure it wasn’t an easy decision for you to make.”

“None of this is easy,” he murmured and then looked up at her again. “I’m not good at this sort of thing—playing it cool and pretending I’m not interested in you when in fact I am. So…I’d completely understand if you didn’t want to stay and have that drink or talk like we’d planned. You’re probably sitting there trying to figure out a nice way to tell me to get out of the car.”

Brooke was about to correct him, but Owen kept talking.

“I thought about hiring you, but I couldn’t. Not because I don’t want you on the trip, but because I knew I couldn’t handle working with you every day and having you close by while I’m attracted to you. And knowing you were only there because you wanted to paint and that you weren’t interested in me.”

Now she had to speak. Before he could get another word out, she squeezed his hand and got his attention. “But you’re wrong.”

He didn’t seem to understand what she was talking about.

“I do want to go on this trip to paint—I’m not going to deny that—but…Owen, I’m attracted to you too. I’ve enjoyed getting to know you, and the more time we spend together, the more I want to spend with you. I was afraid maybe you didn’t want me on the trip because I wasn’t smart enough or—”

She never got to finish.

Owen closed the distance between them and cupped her face in his hands as his lips claimed hers.