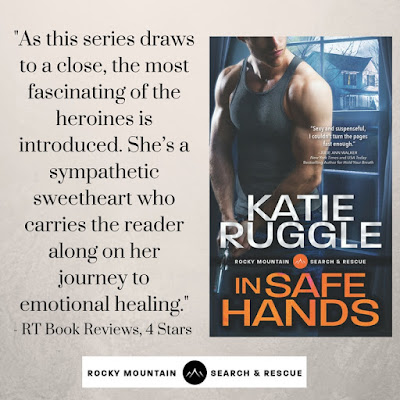 In Safe Hands
By Katie Ruggle 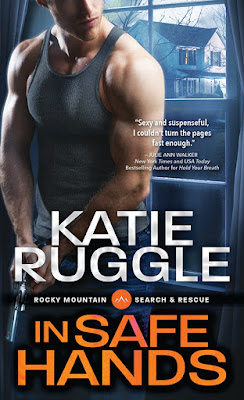 He was her hero,

But one wrong move ended their future before it could begin.

Now he'll do whatever it takes to keep her safe,

Even if that means turning against one of his own.

As a member of the Field County Sheriff's Department, Chris Jennings is used to having it rough. The Colorado Rockies aren't for the weak-of-spirit, but he's devoted his life to upholding the law—and to protecting the one woman he knows he can never have. He'll do whatever it takes to keep her safe.

Daisy Little has lived in agoraphobic terror for over eight years. Trapped within a prison of her own making, she watches time pass through her bedroom window. Daisy knows she'll never be a part of the world...until the day she becomes the sole witness of a terrible crime that may finally tear the Search & Rescue brotherhood apart for good.

It was worse than she’d expected.

“No fresh boot prints anywhere around the perimeter of the house,” Sheriff Coughlin confirmed.

“It was windy last night. Maybe the drifting snow filled in the prints?” Even before she finished speaking, the sheriff was shaking his head.

“With the warm temperatures we’ve been having, the snow is either frozen or wet and heavy. If someone had walked through that yard last night, there would’ve been prints.”

Daisy hid her wince at his words, even though they hit as hard as an elbow to the gut, and struggled to keep her voice firm. “There was someone walking around the outside of that house last night, Sheriff. I don’t know why there aren’t any boot prints, but I definitely saw someone.”

He was giving her that look again, but it was worse, because she saw a thread of pity mixed in with the condescension. “Have you given more thought to starting therapy again?”

The question surprised her. “Not really. What does that have to do…?” As comprehension dawned, a surge of rage shoved out her bewilderment. “I didn’t imagine that I saw someone last night. There really was a person there, looking in the side window.”

All her protest did was increase the pity in his expression. “It must get lonely here by yourself.”

“I’m not making things up to get attention!” Her voice had gotten shrill, so she took a deep breath. “I even said there was no need for you to get involved. I only suggested one of the on-duty deputies drive past to scare away the kid.”

“Ms. Little.” His tone made it clear that impatience had drowned out any feelings of sympathy. “Physical evidence doesn’t lie. No one was in that yard last night.”

The sheriff took a step closer. Daisy hated how she had to crane her neck back to look at him. It made her feel so small and vulnerable. “Do you really?” he asked. “Eyewitness accounts are notoriously unreliable. Even people without your issues misinterpret what they see all the time. The brain is a tricky thing.”

Daisy set her jaw as she stared back at the sheriff, fighting the urge to step back, to retreat from the man looming over her. There had been someone there, footprints or no footprints. She couldn’t start doubting what she’d witnessed the night before. If she did, then that meant she’d gone from mildly, can’t-leave-the-house crazy, to the kind of crazy that involved hallucinations, medications, and institutionalization. There had to be some other explanation, because she wasn’t going to accept that. Not when her life was getting so much better.

She could tell by looking at his expression that she wasn’t going to convince Coughlin of anything. “Thank you for checking on it, Sheriff. I promise not to bother you again.”

Although he kept his face impassive, his eyes narrowed slightly. “If you…see anything else, Ms. Little, please call me.”

That wasn’t going to happen, especially when he put that meaningful pause in front of “see” that just screamed “delusional.” Trying to mask her true feelings, she plastered on a smile and turned her body toward the door in a not-so-subtle hint for him to leave. “Of course.”

Apparently, she needed some lessons in deception, since the sheriff frowned, unconvinced. Daisy met his eyes with as much calmness as she could muster, dropping the fake smile because she could feel it shifting into manic territory. She’d lost enough credibility with the sheriff as it was.

The silence stretched until Daisy wanted to run away and hide in a closet, but she managed to continue holding his gaze. The memory of Chris telling her about the sheriff using his “going to confession” stare-down on suspects helped her to stay quiet.

Finally, Coughlin turned toward the door. Daisy barely managed to keep her sigh of relief silent.

“Ms. Little,” he said with a short nod, which she returned.

Only when he was through the doorway with the door locked behind him did Daisy’s knees start to shake.

About the author
When she’s not writing, KATIE RUGGLE rides horses, shoots guns, and travels to warm places where she can SCUBA dive. Graduating from the Police Academy, Katie received her ice-rescue certification and can attest that the reservoirs in the Colorado Mountains really are that cold. While she still misses her off-the-grid, solar- and wind-powered house in the Rocky Mountains, she now lives in Rochester, Minnesota near her family.