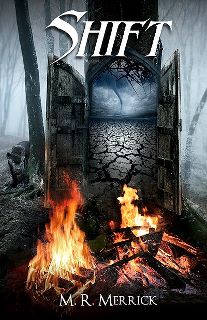 Blurb- Devastated by a terrible loss, Chase is trying to balance the life he’s been left with, a family he’s still getting to know, and power he never thought he’d have. He doesn’t understand why the Goddess has named him the Protector and granted him two gifts: the Mark, a tattoo that now covers his back, and the ring. But between getting interrogated by the Circle and psychic attacks from Riley, the Mark is the least of his concern. There’s a demon inside Rayna that’s fighting to be released, and it’s not her inner witch. It’s something else—a monster threatening to tear her apart.

As Chase struggles to control his magic, his enemies are closing in. Everyone has staked a claim on his ring, and destroying it may be his only chance to stop Riley. But Chase must decide if stopping him is worth risking the lives of everyone he cares about, or if protecting the ring will be enough to save his world.

Review- Merrick has amazed me all over again with the second installment in "The Protector" series. He really is the whole package. A package which includes a vivid imagination, a writing style to make any author jealous, loveable characters, not to mention one the most creative storylines I have ever come across. Did I mention that he published it himself?

We find Chase right where we left him in Exiled (If you missed my review on that you can check it out HERE). There is no mucking around with Merrick, because we are thrown straight into action and drama from the very first page. Chase's intense struggle with a heart-breaking loss and the unpredictable magic inside of him makes for a crazy roller-coaster ride of emotions and occurrences that will have you on the edge of whatever seat you're sitting on. Not only do we have to watch Chase go through pain, his friends Rayna and Willy also face some difficult obstacles and tough decisions.

From start to finish, word to word, Shift was one exciting, edgy read that everyone will love. So waste no time and get your copy NOW!

Merrick is currently working on Book 3 in the series...

So keep your eyes peeled for updates.
Posted by Renee Booth at 5:28 AM