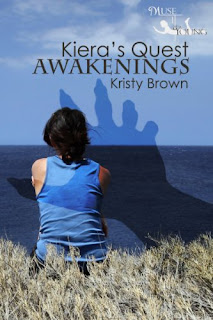 Blurb: Meet Kiera, a pretty, intelligent, and talented girl, brought up by her uncle, and abandoned by her parents. Life is as normal as she believes it to be, apart from the deep ache inside her, telling her she’s different. For years, Kiera had dreams where she ventures into a different reality. She’s not alone; a presence is always there, keeping her safe, yet she feels vulnerable, and hunted.

Zakk, Prince of Zantar, is under the Witch Queen’s spell as she tries to take over his world. He crosses paths with Kiera, and their fates are entwined.

As their journey unravels, she learns that she is not the only one affected by this prince. Who is on her side? Will she find out why she has been chosen? How can someone so young, defeat such evil? Will she find the strength to save the ones closest to her? Will this be Kiera’s only Quest?


My Review: I was lucky enough to be given the chance to review this book, I was very excited to get started.

This book is such an easy read, in 75 pages Kristy Brown takes you on quite a spell binding adventure, one full of courage, betrayal, friendship and a evil, it truly captivates you. I found myself glued to every page, and not wanting it to end.

The characters are fun to read and really bring the story to life. The main character Kiera is very Courageous, loyal, full of trust and such a sweet, caring girl.
We than have Zakk whose life (as well as Kiera's) has been turned upside down thanks to the evil witch queen. He's thrown to a world he doesn't know and that's were he meets Kiera, together they'll do great things.
The Witch Queen (I love the villian being a woman) is set on taking over Zakk's world Zantar, she's truly a scary piece of work.

For a debut novel Kristy Brown has done an amazing job, and I recommend everyone give it a try. I can't wait to read more about Kiera & Zakk.