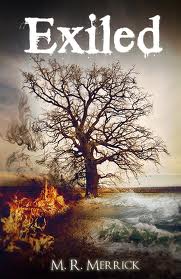 Blurb-
Chase Williams is a demon hunter in the Circle, or at least he was supposed to be. On his fifteenth birthday, Chase stepped up to the altar to claim his elemental power, but it never came. Elemental magic is passed down to a hunter through the bloodline, but on Chase's birthday, the bloodline stopped.

Exiled without the Circle's protection, Chase has spent two years trying to survive a world riddled with half-demons and magic. When he has a run in with a frightened and seemingly innocent demon, he learns the Circle's agenda has changed: the Circle plans to unlock a portal and unleash pure-blood demons into the world. Vowing to stop them, and knowing he can't do it alone, Chase forms a reluctant alliance with Rayna - a sexy witch with an attitude and a secret. In their attempt to stop them, Chase and Rayna find themselves in the middle of the Circle's plan, leaving one of them to decide what their friendship is worth, and the other's life depending on it.


Review-
OH MY GOSH where do I start??? I loved this book. From the first sentence you are thrown right into action. No mucking around which for me is essential because I get bored easily. I was sucked into the story from the get go. Chase (I love that name) is your typical 17 year old boy who just wanted to make his Father proud but nothing he ever did was good enough. He realised he would never be good enough when his Father exiled him from “The Circle” along with his Mother. So from the start you have a soft spot for Chase. Chases' world is thrown upside-down when he meets Marcus and Rayna and everything he has ever been taught to believe is not as it seems. He grew up with a hatred for Underworlders but Rayna is part Hunter part Underworlder. Learning to put his trust into someone who he was taught to hate doesn't come easily for Chase.
M.R Merrick has a fantastic imagination. The interesting creatures and realms are so different to anything I have ever read before and the way he described all of the details made it easy for me to put it all together in my head, like a movie. I cannot praise this story highly enough. I loved reading it and I loved playing it all out in my head. It's definitely a story I lost myself in and will continue to because there is a sequel coming. “Shift” is due to come out in early 2012. I wonder what is in store for Chase and Rayna? I will be sure to keep you posted.

For more information about M.R Merrick check out his BLOG or FACEBOOK PAGE

And get your copy of Exiled from here AMAZON OR SMASHWORDS

Email ThisBlogThis!Share to TwitterShare to FacebookShare to Pinterest
Labels: book review, Exiled, YA