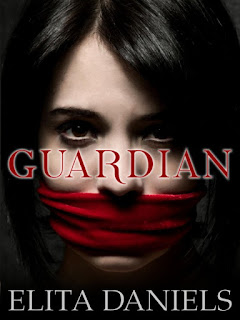 
Blurb: Beautiful vampire Anna, is entangled in a social conflict between human and vampire races. The Vampire Infection they'd thought could uncover medical miracles has spread out into the city.

Carrier Vampires who can infect people with the blood lust disease have been detained in an attempt to halt the spread. Non-carriers have been left to normal lives, treated with sedating medication. But there were still too many accidents, it's been decided by Alicorp to assign human protectors - mandated by law.

These protectors are known as....Guardians.

Anna falls in love with her guardian, a man who wants to find a cure, but the more she learns about him and his association with Alicorp the harder she finds it to trust him.
My Rating:

An awesome read.
My Review: I was so excited when i was asked to review this book, gotta love the book covers! *winks*
I must say i really enjoyed reading this book, with all the vampire books out these days this one adds a new refreshing twist to life as a vampire. It gives us a view into what life would be like if Humans controlled the vampires.
Human's discovered this infection and once it became public each vampire was assigned a Guardian to watch over them by law.
We have Anna she was 24yrs old when she was first infected. She's been infected for roughly 8 years and 2 of those years was in a testing clinic were they did horrible things to her. They are made to drink artificial blood and are tested often to check they stick to it. Anna's new Gaurdian Leon is a scientist he's interested in finding a cure to the infection.
Human's can be so cruel!! (but so can vampires!) lol
It's got me hanging for the next installment. It may be a short story to read but it's well written that it gives you so much more. I'd recommend this book to all the Paranormal readers, this gives you a nice taste of something different. *winks*
Go check out Elita Daniels Guardian Facebook page https://www.facebook.com/?ref=home#!/pages/Guardian/150748691628261
Here's her Author page also https://www.facebook.com/?ref=home#!/pages/Elita-Daniels/198032196876241
And you can find where to buy it through this link http://elitadaniels.com/guardian
Posted by Stacey at 9:41 PM