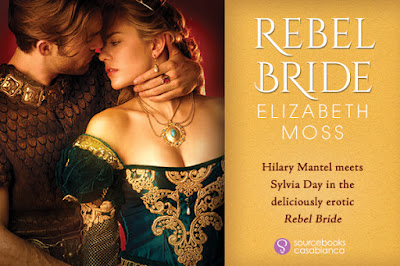 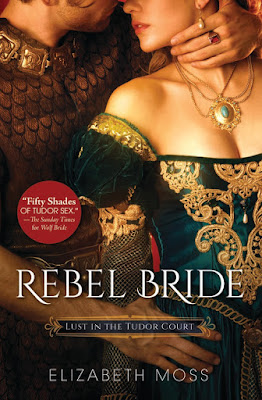 Hugh Beaufort, favored courtier of King Henry VIII, likes his women quiet and biddable. But Susannah Tyrell is neither of these things. She is feisty, beautiful, opinionated and brave. And Hugh is fascinated by her—despite himself.

When Susannah pulls an outrageous stunt and finds herself lost in the wilds of England, Hugh must go to her rescue. Neither of them is prepared for the dangers that lie in wait. But most deadly of all is their forbidden desire for one another. Hugh has long held himself in check, but even his iron will has its limits as they remain alone together in the forest, far from the restraints of court...

In Rebel Bride, Hugh and Susannah travel the dangerous roads of Tudor England together, forced into each other’s company by circumstances. Beautiful and feisty, Susannah has run away from her cruel father in Yorkshire. Finding her in the wild forest, Hugh is determined to escort his willful charge safely to the king’s court.

Fictional journeys like this often work as metaphors for a character’s inward journey towards emotional or spiritual development. For Susannah, this journey to London is about resistance and attraction; for Hugh, it’s a struggle between physical desire and his moral duty to protect this young woman – even from himself!

Travel in Tudor England was not easy, even for a courtier like Hugh Beaufort. Beyond London, major roads were little better than muddy tracks, with robbers and bandits lying in wait for the unwary traveller. Within towns, local citizens were charged with the upkeep of roads; in reality, this meant Tudor streets were dark, narrow and uneven, pitted with potholes, and strewn with rubbish and human ordure. The wealthy travelled by horse or curtained litter, a good horse covering up to 30 miles per day. There were no carriages yet, and carts would have been deeply uncomfortable for passengers, lacking any form of suspension as they jolted and bumped over every pothole.

Road trips around England could take a week to ten days to complete, and wealthy travellers like Hugh and Susannah usually preferred not to hurry. Every night would be spent at a wayside inn, as journeying after dark was impractical without lights. If you could find a place to stay that looked clean and was free of plague, you were lucky. Popular inns might be crowded with travellers, and being forced to share a bed with a stranger was not unheard-of. Though on their journey, Hugh has to be careful – in public at least – to keep his distance from an unmarried lady like Susannah.

Fare would have been simple too. Inn keepers or famers along the way might provide travellers with the equivalent of a packed lunch for the journey. Our hero and heroine probably dined on bread and cheese, smoked bacon, honey cakes, and a stoppered flask of beer, consumed at the roadside. As a courtier, Hugh might have insisted on wine and perhaps sweetmeats for his lady companion. Besides onions for flavor, even wealthy Tudors rarely consumed vegetables, though seasonal fruits were popular and often elaborately prepared.

Hugh and Susannah’s Tudor tips for your own road trip:

Never argue with thy love in front of thy companions on the road, for fear of shaming one another.

Journey not for many hours without ceasing, but take thy ease from time to time, for fear of some mishap.

Avoid excess of wine and music late at night when the body is weak and the desire strong.

Consume not strong onions with thy cheese. Or, if thou must, keep a sprig or two of parsley close at hand and so avoid the reek of foul breath.

Let neither wine nor ale confuse thee on horseback, but keep thy good wits sharp, remembering that robbers and uneven roads ever assail the unwary traveller.

Carry a saint’s bone or other holy relic in thy purse, and thou shalt end thy journey safely and in good spirits.

Born into a literary family, Elizabeth Moss lives with her husband and five children in South West England, and is a keen countryside walker. She writes fun, sexy historical romances and also writes award-winning fiction as Victoria Lamb. For more information, please visit her website: www.elizabethmossfiction.com.