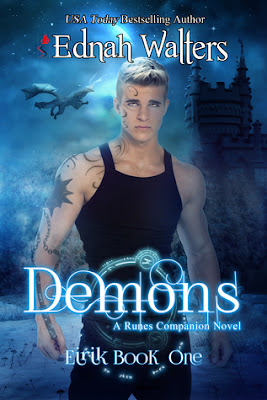 Eirik Baldurson—son of Baldur, God of Light—failed living as a Mortal. He lost the girl of his dreams and nearly got his friends killed. Now, he's gone to the underworld to meet the mother he’s never known. Torn between his duty to her and the man he used to be, Eirik struggles to find himself, until a witch appears in his world. Feisty and stubborn, she is a reminder of everything good he left behind.


Celestia Devereaux proudly attends a charter high school for “gifted” teenagers who embrace magic. Witches. However, she keeps a terrible secret—a prediction that she would one day be responsible for massive destruction and death. Though Celestia uses her clairvoyant abilities to help people, she worries that it is just a matter of time before she goes over to the dark side.


Her world changes when she unexpectedly astral projects to a place she didn’t believe existed and meets a tortured man who needs her help. Will helping him cause her fears to come true, or will he sacrifice everything to save her?

I just love the Runes series and when I saw that Walters had decided to do a story about Eirik, well there was a lot of girly squealing involved.

Eirik, a young God who was raised in the human world. No knowing his real parents he was on the hunt for some much needed answers, so he made the decision to find his mother, the Goddess Hel. Meeting his mother for the first time didn't go to smoothly when he finds himself locked in the dungeon for some sort of training. That's when he meets..... Celestia, a young witch whose comfortable with who she is. Celestia has a special power, she can astral project. Using this power she is able to help people in need. Until one day it takes her to the deepest depths of Hel, a place she never even knew existed.

I simply adored the characters, old and new. From start to finish I was hooked.

Eirik's story is full of adventure, danger, magic, love and fire! Unexpected twists around every corner, never a dull moment.

I highly recommend this book and the whole Runes series, I just can't praise them enough. It's definitely a series that needs to be experienced.


**I received an ARC in exchange for an honest review**