**BOOK BLITZ & GIVEAWAY** Trapped with the Blizzard by Adele Huxley 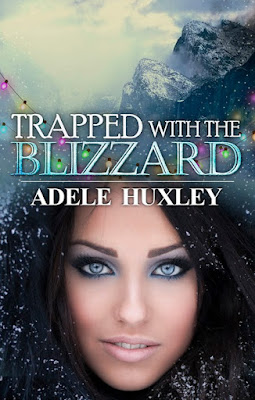 A new danger lurks in the storm...

All I wanted was the perfect quiet Christmas in our new home with my growing family. A huge tree, cookies, carols, you know… some basic frickin’ Yuletide cheer. Of course, because we’re Liz and Bryan “The Blizzard” Marsh, nothing can go to plan.

First, we agree to take in Bryan’s cousin Dani for the winter. In the cult of moody teenagers, she is their Queen. I’d hoped we could connect, but to say we haven’t gotten along would be the understatement of the century.

Then there’s the Market Price Pyro, a local arsonist who is torching buildings all over town. Cops can’t stop him and no one knows what to do. I don’t care what Bryan says. Even though we haven’t been directly targeted, I know we’re linked in some way.

And to top it all off, Mother Nature has veered the storm of the century right to our front door. With a three-day blizzard barreling down on Tellure Hollow, we’re forced to evacuate everyone in town to the Powder Mountain lodge. As the resort caretakers, Bryan and I try to make Christmas as comfortable as we can.

Once we settle into the lodge to wait out the storm, strange things start to happen. It’s only when we’re completely snowed in I start to wonder… Maybe by trying to keep everyone safe from the storm, we’ve put them at even greater danger.

Trapped with the Blizzard is a standalone romantic thriller that takes place after Devoted to the Blizzard. The books in the Tellure Hollow series can be read individually, but are best read in order. This book is a great combination of contemporary and new adult romance featuring two main couples of different age ranges. This novel contains adult language, sexual situations, and violence. It's intended for adults. 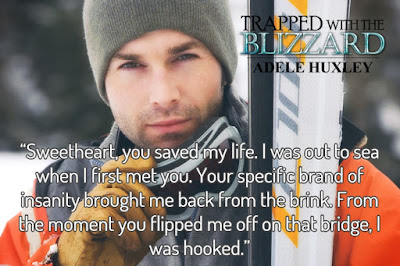 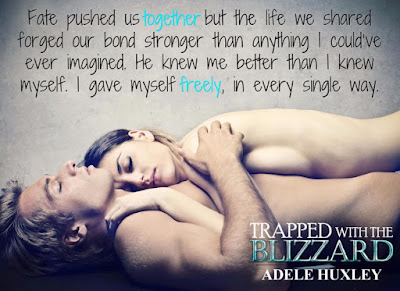 OTHER BOOKS IN SERIES:

Caught by the Blizzard

Saved by the Blizzard

*Bundle* Caught and Saved by the Blizzard

Devoted to the Blizzard

“Another fire has turned deadly. A 19-year-old woman has been found dead after a nighttime blaze in Tellure Hollow started late last night. Jen Wachowicz is live at the scene but first, a look at the weather. Dan?”

The broadcast flipped to a middle-aged man with a middle-American accent. “Thank you, Hillary. As you can see, this storm is a monster and still hasn’t finished growing yet. We’ve been keeping an eye on it and the system seems to have shifted slightly. The jet stream is dipping down from the north a lot further than we originally expected while this swirl of moisture from the south is going to sit and rotate. This could mean one of two things.” The TV flashed with a graphic depicting two possible paths the storm could take. One showed the storm system shearing off to the north, missing us by hundreds of miles. The second, less likely track put the storm almost dead center on Tellure Hollow.

“The storm has the potential to dump two to three feet of snow in some locations,” the weatherman continued. “Other spots, mainly in the mountains, may see twice as much. There are a lot of variables at work with this storm, so there’s plenty of opportunity for this track to change. Anyone in this area,” he said, gesturing to a broad swath of the Rocky Mountains, “should keep an eye on this evolving situation.”

“Dan, what’s the timing of this storm?” Hillary asked.

“Well, Bing Crosby would be happy,” he said with a fake smile. “Timing for this storm in our area should mean we’ll have a very white Christmas. Back to you.”

“Thank you, Dan. As we reported at the top of the hour, the small mountain town of Tellure Hollow is rocked by yet another fire, this time, with deadly consequences. We now go live to Jen at the scene. Jen?”

The young reporter had her finger in her ear, the bright lights washing out the layers of makeup plastered on her face. Wide-eyed, she jumped at the introduction. “Yes, thank you, Hillary. Residents are shocked by the latest development in the ‘Market Price Pyro’ arson spree. The charred remains of the building you see behind me is all that is left of a vacation rental. 19-year-old Rachel Swank, a Denver native, was staying in the cabin with five others. The teenage friends had minutes to escape when the fire broke out in the early morning hours.”

The TV cut to a prerecorded scene. A distressed young woman with tears streaking her face stood wrapped in a rough blanket. She stared at the cabin in disbelief as she spoke into the microphone. “My boyfriend smelled the smoke first. We were able to crawl out on the deck. By the time we realized Rachel wasn’t with us, it was… there was no way.”

The camera returned to Jen’s somber face. “Firemen have confirmed the smoke detectors were stripped of batteries prior to the fire. Because of the incendiary materials used to start the blaze, and the letter found pinned to a tree at the scene, police are pinning this fire on the same arsonist who has plagued the area for weeks. Residents are asked to remain vigilant and report any suspicious behavior.”

I turned off the TV, set the remote on the table with a trembling hand, and spoke without looking at Bryan. I was afraid if I did, the tiny hold over my emotions might crumble.

“You recognized the cabin, right?”

He sighed and leaned forward to put a hand on my back. “It doesn’t mean anything.”

I rolled my eyes. “How many times have we gotten ourselves into trouble by ignoring the obvious? There’s a connection here. I can feel it.”

“Maybe there is, but that doesn’t mean we have anything to do with it. Other things can happen in Tellure Hollow that don’t involve us, you know?” he quipped. “The world doesn’t revolve around us.”

I didn’t completely believe that, but I snorted despite myself. “Of course it does. We’re the most important people in this town,” I chuckled quietly.

“A quiet night?” I scoffed. “With Miss Moody stomping around upstairs? What if she brings the cloud down with her?” Still, sitting so close to him was giving me all sorts of ideas.

“We’ll put on America’s Got Talent or something equally lame to scare her back to her bedroom,” Bryan added.

“Well, aren’t you full of solutions?” I bumped his shoulder with mine, still trying to shake the sinking feeling in my gut.

“That’s me, solving the world’s problems, one compromise at a time.”

Adele Huxley is many things. A coffee addict, bad at math, oh... and an author. Her college degree proves several professors believed she is capable of stringing multiple sentences together. Her college debt proves she's bad at math. Adele also doesn't like writing in the third person, so she's decided to finish the rest of this bio like a human being.

If I had two fictional best friends they'd be Luna Lovegood and Wednesday Addams. In fact, I wish with all my heart I was the love child of both.

I'm married to my very own hunky Englishman, love to travel, and enjoy creating new elaborate swear words. I have three cats and move so often I don't bother unpacking anymore. Seriously. In the past six years I've lived in 5 different states, 3 different countries, and, for a short time, out of my suitcase!

The best part of this job is meeting and talking with people who love words as much as I do. Come say hi! All contact info can be found on www.adelehuxley.com


Trapped with the Blizzard Giveaway
Posted by Stacey at 4:00 AM