**SPOTLIGHT, EXCERPT & GIVEAWAY** One Rogue at a Time by Jade Lee 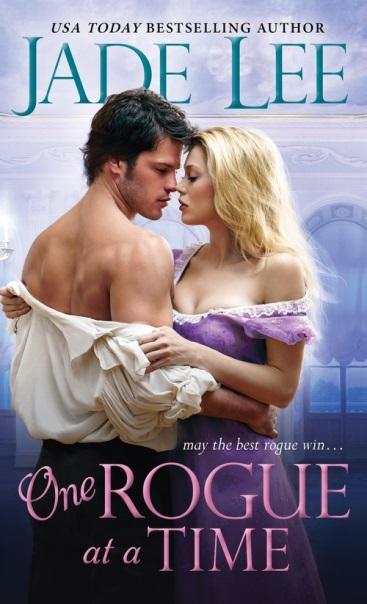 USA Today bestselling author Jade Lee continues her saucy, vibrant Rakes and Rogues Regency romance series with a high-society outsider who may have met his match…

A brown-eyed bastard with nothing to lose
As the illegitimate son of a duke, Bramwell Wesley Hallowsby grew up tough, on the fringes of society, learning to hide his hurt and cynicism with charm and Town polish. He’s carved out a place for himself as a mercenary, serving as bodyguard and general strong arm for the peerage. Bram has nothing to lose… and he’s exactly what Maybelle “Bluebell” Ballenger needs.
Meets his match in a blue-eyed beauty with everything to hide

Maybelle needs a mentor to teach her to speak and act like a lady, so she can claim the place in society she was denied. As they team up to take on the ton, Bram knows she’s hiding something even from him. Despite the deception he sees behind those sparkling blue eyes, Bram wants to believe that Maybelle’s love is no lie. But it seems fate has served him up his just desserts in the likes of this determined damsel.

The second in Jade Lee’s saucy Rakes and Rogues series, One Rogue at a Time, comes out this December! To celebrate, Jade played a quick round of ‘Would You Rather?’ with us and sent an excerpt from the book to share.

Would you rather never have chocolate again or live without the internet forever? I refuse to choose. That’s a horrible question! But since most of my contact with the rest of the world is via email, I suppose I have to keep the internet. But a life without chocolate isn’t really worth living, is it?

In this excerpt our heroine (nicknamed Bluebell) is angling for our hero to take her to London where she can meet her father for the first time. She’s bargained for speaking lessons, and now she’s bartering for a ride to London. But she isn’t prepared for the price he demands.

“You want me to take you to Oxfordshire and then on to London,” Bram accused. “You want me to dress up this fine carriage and let you appear before your relations like a fine lady. You’ve been planning that from the moment you met me.”

“Ooo, an’ me a simple maid from ’Ull. Wot makes ye think I could muster all that?” She exaggerated her accent such that his back molars ground together in disgust.

He grabbed her chin, pulling it—and her—toward him. Part of him thrilled at finally touching her pristine skin. Part of him watched how her eyes widened and the pupils darkened, her mouth slipping open on a gasp. Was she afraid of him? Yes. Obviously. And he tried to care. He tried to tell himself that he didn’t want to punish her for crimes she hadn’t committed. But she was a schemer just like the others, and so he damned her all the same.

“I will take you to London,” he said, his voice low, his breath hot.

She didn’t answer, and he didn’t care.

“But there’s only one payment I’ll take.”

“Say it all you like, Miss Bluebell, but I know the truth.”

She swallowed, trying to pull herself back, but she was still sitting on the barrel, so she had nowhere to run. She stilled and her eyes narrowed.

“Wot truth? That I want to go to London? That I want proof o’ my father? Or that you’re nothing but a man with ruttin—”

He kissed her. He wasn’t slow, and he wasn’t remotely gentle. And the fact that she was completely untutored in the way of kissing infuriated him even more. She was a lie. She deserved all the pain he could give her. She was…

She was an innocent, and he had to soften. He had to become gentle with her, and so he did. He didn’t want to, contradictory beast that he was. He liked his anger. Stoked it to a hot flame, but not against her.

So he softened. He gentled.

Where before he had simply wrenched her mouth to his, he now petted her chin. And though he had forced his tongue into her, he eased his penetration. He teased her and then pulled back.

“You are a lie,” he said to her panting chest.

“You are a brute,” she answered, anger vibrating out of her.

“You’re not even ashamed.”

Oh, he was. He was riddled with shame, but he wouldn’t let her see it. She had to know the truth about him before she tried to play her games. “I’ll take you wherever you want to go, Miss Bluebell. But I’ll be taking you as I do it.”

He felt the impact of his words on her body. She shuddered, but she also licked her lips. Part of her wanted him, brute though he was.

“Ladies spread their legs for me all the time.”

“Then I’ll not take you anywhere.”

He felt her accept the truth of his words. Her body bowed, and her shoulders drooped. But when she spoke, her voice was strong with conviction.

“I don’t need you to take me. I’ve coin eno’. The mail coach goes to Oxfordshire and London.”

“You’ll be prey to every bloke who sees you.”

She finally jerked her chin away from the stroke of his fingers. “’At’s been true since I first started filling out a dress.” And then before he could anticipate her move, before it even registered that he was in danger, she lifted her knee.

How she’d maneuvered it so perfectly, he didn’t know. But one moment he was hard as a rock, still thinking of ways he could make her willing. The next there was a blinding flash of white-hot pain, and he was crumpled onto the ground.

He couldn’t breathe. He couldn’t think. He just knew pain. And one word: 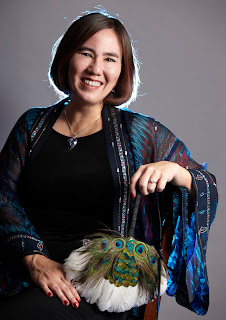 USA Today bestselling author Jade Lee has been crafting love stories since she first picked up a set of paper dolls. Ballgowns and rakish lords caught her attention early (thank you Georgette Heyer), and her fascination with the Regency began. An author of more than 40 romance novels and winner of dozens of reader awards, she brings laughter into the sexy nights of England's elite. Quirky characters and sexy banter are her hallmarks. Find out more at her website www.JadeLeeAuthor.com, or check out her wild contemporary half at www.KathyLyons.com.