Another day, another Spotlight and Giveaway!
I hope you enjoy todays post and excerpt. Don't forget to enter the giveaway! 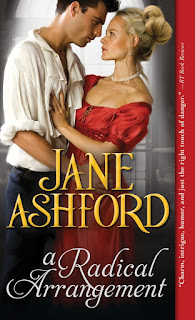 Brash and Handsome
Sir Justin Keighley is all wrong for a proper young lady like Margaret Mayfield. Everyone knows he is shocking in his opinions, arrogant in his manner, and completely without respect for the common decencies of civilized society. Margaret absolutely will not marry him—no matter what her parents say.

Beautiful and Shy
Margaret was everything Sir Justin detested in a woman—timid, sheltered, and obedient to a fault. It’s not until she runs away from him that he finds he must give chase. Margaret is discovering she can be bold and rebellious—intrepid enough to do what she must, and more exciting than Justin ever imagined possible. She’s the last woman he would have expected to lead them both into uncharted territory…

Jane Ashford, a retired teacher and editor, is now a beloved author of historical and contemporary romances. She has been published in various parts of the world, including Sweden, Italy, England, Denmark, France, Russia, Latvia, Spain, and of course the U.S. Jane is also a two-time RT Book Reviews Career Achievement Award nominee. Born in Ohio, Jane now divides her time between Boston and Los Angeles. 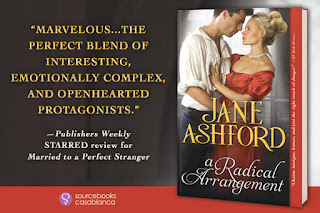 Sir Justin Keighley stood in the doorway, looking them over with a slight, satirical curve of his lips. He wore, like the other gentlemen, conventional evening dress, but this superficial similarity was their only common ground. Ralph Mayfìeld, Philip Manningham, the squire, and John Twitchel were none of them unattractive men or negligible personalities. Each, in his own sphere, had a certain dignity and authority, and all had the confidence that respect engendered. Yet somehow, the moment he entered the room and before he spoke a word, Justin Keighley eclipsed them. It was not charm. Indeed, the newcomer did not look at all pleasant or ingratiating. And it was not mere social position. Keighley held an ancient baronetcy and a substantial fortune, but any of twenty men his hosts were accustomed to meeting ranked above him. Ralph Mayfield could not have said why he felt subdued as he came forward to greet his final guest.
The squire’s wife might have enlightened him. As she had told a friend at a Bath assembly two years ago, “Justin Keighley is a vastly attractive man, my dear. And not just to women. All the young men ape him, my son among them. I don’t know just how it is, but he has a great influence without appearing to seek it in the least. Indeed, sometimes I think he dislikes the idea. But it goes on. It’s something in his manner. No doubt you’ve noticed it yourself. He makes you look at him.” Mrs. Camden had been embarrassed by this speech, but it was quite true. And Keighley’s attraction was the more mysterious because he was not conventionally handsome. Though tall and well made, with broad shoulders and a good leg, his features were rough—a jutting nose and heavy black brows that nearly obscured expressive hazel eyes. And he took no care with his dress, a rarity in an elegant age. His coats were made so that he could shrug himself into them without help; his collars did not even approach his jaw; and he had once been observed in White’s with a distinct thumb mark on his Hessian boots, giving one of the dandy set what he described as “a shuddering palpitation.”
But these sartorial eccentricities were outweighed by Sir Justin’s political influence and sagacity. He was an intimate of the Prince Regent and Lord Holland, and important in the Whig Party. These facts did not explain his fascination for a great number of people, chiefly women, who hadn’t the slightest interest in politics, but they amply justified the Mayfìelds’ attention and suppressed antipathy.
“Good evening,” Keighley said to Mr. Mayfield in a deep, resonant voice. “I hope I haven’t kept you waiting.”
“Not at all, not at all. Come in. You know everyone, I think.”
Sir Justin bowed his head with a sardonic smile. He always met precisely the same people at his yearly dinner with the Mayfields, presumably those they were certain he could not “corrupt” with his aberrant opinions, and he always felt the same infuriated boredom. For the fiftieth time he wondered why he came. There was no hope of amusement or chance of advantage here. The Mayfields and their friends were just the sort of smug, resolutely conventional people he despised. They held to the views their fathers had bequeathed them and attacked all others. If one tried to make them change even a fraction, they shook their heads and muttered of treason.
He looked around the room. The only addition this year was the Mayfìelds’ daughter. He had forgotten her name, but he remembered that she had come out last season. She looked as one would have expected: a pallid, simpering creature. Keighley shrugged. Politics forced him to endure fools occasionally. The Prince would want to know the climate of opinion here in Devon. He supposed he could get through this evening as he had previous ones, through a combination of stoicism and bitter inner laughter.
Margaret watched him with awed apprehension as he settled beside Mrs. Camden and began to chat with her about London. She had never actually spoken to Sir Justin; her mother had seen to that. But she had heard him talked of so many times that she felt she knew what he would say in response to a wide variety of remarks. It would always be shocking. She gazed at him in an effort to understand how any man could be so utterly depraved in thought and action, almost expecting his rugged face to contort in a grimace of malevolence and his chiseled lips to emit some horrifying revelation.
Suddenly Sir Justin looked up and met her eyes from across the room. He seemed at first startled to find her staring, then his mocking smile appeared again, and he raised one black brow, holding her gaze. Embarrassed, Margaret tried to look away, but something in his hazel eyes prevented it. A spark glinted there, and she felt a kind of tremor along her nerves. It was utterly unfamiliar and unsettling, like a violent thrill of feeling. How could a stranger affect her so? This must be fear, she thought; I am afraid of him. She began to tremble, but still she could not turn her head away. He seemed to understand her reaction and, amused, to prolong the contact on purpose.
Finally Keighley laughed and bent to answer some question of Mrs. Camden’s. Margaret jerked back in her chair and clasped her shaking hands so tightly that the knuckles whitened. He was a dreadful man. She would not speak to him, and if she ever saw him again, she would run away.