Welcome to today's Spotlight! I hope you enjoy the fun fact, excerpt and make sure you enter the giveaway! 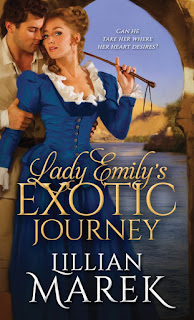 From sensible, sheltered girl
Safe in the embrace of her loving family, Lady Emily Tremaine longs to feel more intensely alive. Surely the magic and mystery of Assyria and the fabled ruins of Nineveh will bring about the transformation she seeks.

To the woman his heart desires
Scarred by his past and estranged from his noble grandfather, French adventurer Lucien Chambertin desires neither a home nor the chains of emotional attachment. He seeks only to explore the far reaches of the world. But he did not know the world contained the likes of Lady Emily—whose curiosity and sense of wonder match his own.

Lillian Marek was born and raised in New York City. At one time or another she has had most of the interesting but underpaid jobs available to English majors. After a few too many years in journalism, she decided she prefers fiction, where the good guys win and the bad guys get what they deserve. 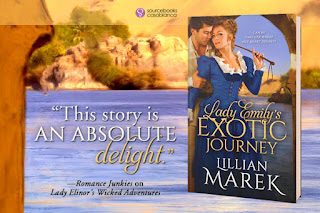 This August marks the release of the second in Lillian Marek’s Victorian Adventures series, Lady Emily’s Exotic Journey!  To celebrate her new release, Lillian’s here to share a fact about the Victorian era she discovered during her research:

Joseph Wolff, known as “The Eccentric Missionary,” went to Bukhara in 1843  in an effort to rescues two British officers. They had already been executed, and Wolff was spared only because the Emir laughed so hard at his appearance.

Emily had left the tent, and Lucien began to turn to her to share his thoughts on the scene when he saw a puff of smoke and a glint of metal by one of the boulders on the cliff. At that moment a bullet ploughed into the deck beside him, and he heard the shot.
He flew across the feet separating them to knock Emily to the ground, covering her with his body. “Keep down,” he ordered when she tried to raise her head. More bullets fell about them, most splashing into the river. He had his pistol in his hand, but he could not see a target on the cliff. The Turkish troopers on the next raft were firing away but not to any useful purpose that he could see.
Meanwhile, the oarsmen on their raft, who had first dropped their oars in a panic, were now working madly to keep them from being dashed against the rocks as the current swept them around a curve. The skipper joined them, shouting encouragement, until a bend in the river had them out of sight of their attackers. As the wild rocking of their craft ceased and they resumed their placid drift, Lucien became aware of his more immediate surroundings.
To be precise, he became aware of Emily lying beneath him. A warm, soft Emily lying beneath him, a situation his own body found most agreeable. Her breasts were pressed against his chest, and he was positioned between her thighs. She was so soft, such a perfect match for him. She did not appear to be distressed by their position, for she was making no effort to extricate herself. Did she understand what their position was? Could she tell just how agreeable his body found this position? Because his body was reacting most strongly to this juxtaposition.
She was looking up at him with an expression of dazed surprise. He wondered if he was looking at her with the same expression. Her hands were sitting on his shoulders, not pushing him away but not drawing him down. Just touching him. Her lips were parted ever so slightly. In surprise? In invitation? He was close enough to feel the damp warmth of her breath. He was overcome with longing and began to lower his mouth to hers.


a Rafflecopter giveaway
Posted by Renee Booth at 6:00 AM