Review- Mine for Tonight by J.S. Scott 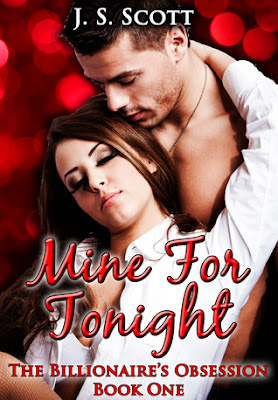 Blurb- Down on her luck, nursing student and full-time waitress Kara Foster get's a massive blow to her already desperate financial situation that will surely find her living on the streets. Needing nothing less than a miracle to save her, Kara gets rescue from an unknown, unlikely and overwhelming source. Billionaire Simon Hudson makes her an offer that is impossible to refuse, but terrifying to accept from a man that she's never met. Will the handsome, alpha billionaire really be a solution to her problems, or will he end up being a major complication and a danger to her emotional sanity?
Reclusive billionaire Simon Hudson would rather be behind a computer creating computer games than rubbing elbows with the elite and he knows exactly what he wants...until he meets Kara Foster. Something about Kara touches Simon in ways he's never experienced and definitely doesn't like. For over a year, Simon watches over Kara, but stubbornly refuses to admit his desire to possess her, not even to himself. But when she ends up in a situation that could very well be her destruction, Simon steps up to help her, not realizing that in saving Kara, he might very well be salvaging his own soul.

Review- I'm not sure where to start with this one. There wasn't a great deal that I did like. The detail to the scenes was there and they were ok and the lemons weren't too bad at all, but the rest wasn't so great.
I think the thing that annoyed me the most was how unrealistic it was. I found myself often thinking "Are you serious? There is no way on hell a normal person would do that, unless you are a whore!" For example, you faint on the street and someone you have never met before takes you up to his apartment and calls a doctor who lives in his building to see to you. Yes that could happen, for sure, but then he tells you that you aren't allowed to leave and you must stay there and eat and rest. I'm sorry but if some stranger did/said that to me I would be screaming bloody murder and try to escape. Not to mention that said person has been staking you for a year without you knowing which makes it even more worse. Wouldn't a normal person have alarm bells ringing? Then you find out that you have been evicted and have nowhere to go so he offers you a place to stay, all expenses paid at his home and the only thing he wants is one night to do as he pleases. No. Just no. Unless you are a whore! I mean, you don't even know this person! Even though she worked for his mother in her restaurant, but you have never even met him! There also seemed to me a lot of feelings coming to surface without any substance. I just didnt get it at all. Am I overreacting? I don't know, but its just not right.

I also don't think that the author should ever be an interior designer because they is no way that I bedroom with black and tan furniture would be nice. Neither would a cream and forest green kitchen.

I don't think I will be reading the rest of the series.

If you want to find out for yourself, you can purchase through the following links:
AMAZON (free)
B&N (free)