Now the Spotlight is not to be missed! This book looks HOT HOT HOT!
Add to your TBR list, enjoy the character profile and enter the giveaway! 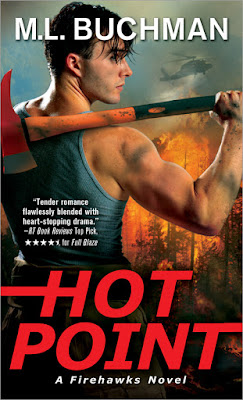 Pulled apart by past mistakes. Driven by a passion neither could deny.

FROM WILDFIRE TO GUNFIRE
Master mechanic Denise Conroy—with a reputation for being as steel-clad as the aircraft she keeps aloft—shuns useless flyboys who don’t know one end of a wrench from the other.

Firehawk pilot Vern Taylor—known for unstoppable charm and a complete lack of mechanical skills—proves his talent for out-of-the-box thinking with every flight. He’s a survivor and a natural-born heli-aviation firefighter.

When Denise and Vern crash together in the Central American jungle with wildfire on one side and a full-fledged military coup on the other, their newly forged partnership is tested to the max. They have each other, but not even their formidable skills combined can protect Denise and Vern from the conflagration sweeping the jungle…and their hearts.

M. L. Buchman has over 35 novels and an ever-expanding flock of short stories in print. His military romantic suspense books have been named Barnes & Noble and NPR “Top 5 of the year,” Booklist “Top 10 of the Year,” and RT “Top 10 Romantic Suspense of the Year.” In addition to romantic suspense, he also writes contemporaries, thrillers, and fantasy and science fiction.

In among his career as a corporate project manager he has: rebuilt and single-handed a fifty-foot sailboat, both flown and jumped out of airplanes, designed and built two houses, and bicycled solo around the world.

He is now a full-time writer, living on the Oregon Coast with his beloved wife. He is constantly amazed at what you can do with a degree in Geophysics. You may keep up with his writing at www.mlbuchman.com. 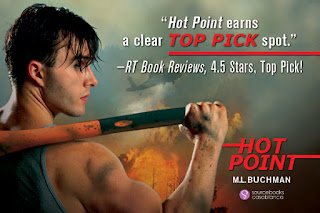 Describe yourself in 100 words or less:
I see things in my head. The pieces, how they fit together, why they work together, especially the bits and pieces that make a helicopter. I wish I could do the same thing with people, but none of their parts ever make sense and I can never make them fit together. When my mother died, I tried so hard to fix our family, but we became a patchwork rather than a smooth operation. I watch others, and I dream, but I know that I’m most comfortable with a machine I can understand.

What is the hardest part of your job? What is the most rewarding?
Fixing a helicopter is easy, anticipating how it will break is hard. It’s my job to keep our pilots safe, right in the middle of a wildfire. But I have to keep them safe before they get in trouble. My favorite moment is standing out on the field at the end of a day. The flight returns from battling wildfire. Everyone is there. Everyone is in formation. And when they land? They have nothing to say to me. Nothing at all.

When not working, how do you spend your time?
I was practically born in an airplane museum. I grew up playing around and eventually restoring classic aircraft. I now have one of the foremost libraries of airplane service manuals; I find the engineering endlessly fascinating.

If money was no object and you had 3 weeks of vacation what would you do with your time?


I’d tour the world’s flight museums, or as many as I could pack into three weeks. The engineering, the sheer audacity of man that we ever conceived, not just flight, but throwing a million pounds of 747 into the skies as if it was a normal task. The bravery of those thinkers can’t help but fire the imagination. I want to see what every single one of them achieved.