**SPOTLIGHT, EXCERPT & GIVEAWAY** A Sword For His Lady by Mary Wine

Today on the blog we have Author Mary Wine and her new release A Sword For His Lady.

Scroll down for the excerpt and amazing giveaway. ^_^ 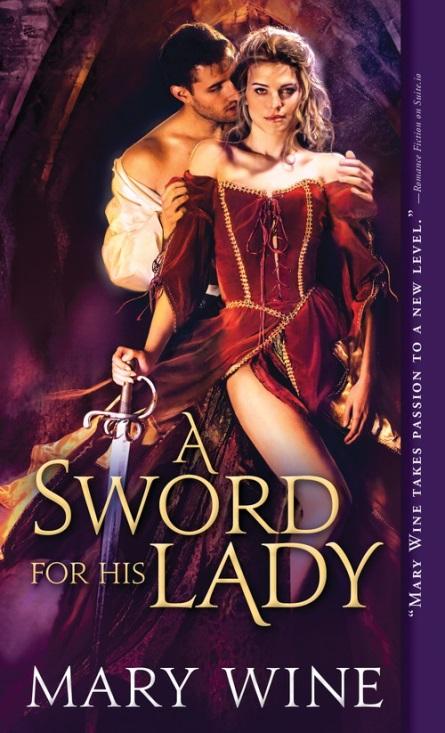 After proving himself on the field of battle, Ramon de Segrave is appointed to the Council of Barons by Richard the Lionheart. But instead of taking his most formidable
warrior on his latest Crusade, the king assigns Ramon an even more dangerous task—woo and win the Lady of Thistle Keep.

If only she’d yield her heart

Isabel of Camoys is a capable widow with no intention of surrendering her valuable estate. She’s fought long and hard for her independence, and if the price is loneliness, then so be it. She will not yield…even if she does find the powerful knight’s heated embrace impossible to ignore. But when her land is threatened, Isabel reluctantly agrees to allow Ramon and his army to defend the keep—knowing that the price may very well be her heart.

He lifted one foot and set it on the bottom step.
“What are you doing?”
“I am entering the keep.” His tone made it clear he knew he was invading her home.
“No.” She fought back her breathlessness. “You shall not.”
She backed up, but forced herself to stop in the doorway.
“Why not, my lady?”
He climbed another step and she felt her knees quiver. It was an insane reaction, one that shocked her with how intense it was its intensity.
“You do not belong in the keep. This is my home.”
He frowned but climbed another step to stand on even ground with her. Isabel lifted her chin so she might maintain eye contact.
“I will be making a full assessment of this structure, lady. You may stand aside or I shall remove you from my path.”
She should have lowered herself and gracefully glided out of the doorway. It was the only response the code of chivalry afforded her, but she couldn’t force herself to do it. She didn’t feel in control of her emotions; they were scattering like autumn leaves. Her heart accelerated. He was pressing closer, watching her, gauging her reactions to him. She’d never felt so exposed. Never felt like any man took so much notice of her. He reached for her, his expression full of promise.
“No one enters this keep without bathing.” She spat the words out in a rush and had to pull in a deep breath because her lungs burned when she was finished. At last, relief flowed through her, for she had found a valid argument to use.
The baron’s expression didn’t change. His hands were clenched around his wide leather belt, his knuckles turning white.
“Take yourself off to the bath house, my lord baron.” She was being brazen.
He suddenly grunted, amusement returning to his eyes. “Very well lady, since you wish to offer me your hospitality, I accept.”
She stared at him, uncertain of the flicker burning in his dark eyes. This wasn’t a man who knew defeat, and the muscles in her neck tightened when his lips twitched into a smug grin once again.
An expression that was full of victory.
“I shall enjoy having you bathe me, Isabel. It is certainly a good place for us to begin to learn more about one another.” A gleam appeared in his eyes that sent a shiver down her body.
“I did not offer to bathe you myself.” Her voice was a horrified whisper. He stepped closer, capturing her wrist in a grip that surprised her because it lacked pain with its gentleness. Instead, she felt their connection keenly, so much so, it felt as though that she couldn’t form a single, sensible thought. Logic had always offered her salvation in the past. Before Ramon, it crumbled away, leaving her at his mercy.
“You claim you are no maiden, so it is only customary for you to attend me since you are the lady of this keep.” His voice lowered. “Or perhaps, you would prefer not to act as a lady. In such a case…I will be most pleased to dispense with ceremony.”

Named a Top 10 Pick for Spring 2015 by Publishers Weekly, Mary Wine’s A Sword For His Lady comes out this July! Mary’s agreed to stop by today and has answered some questions for us about herself and her career as an author.

If you were stranded on a desert island and could only bring three items, what would you bring?
Satellite phone, solar charger, Jamie Frazer.

When was the moment that you knew you had to be a writer?
It came early. I was around 12 but was told it was impossible to become published. It wasn’t until my early thirties that I wised up and told myself to go and get my dream.