Welcome to our stop on the Ruin & Rule blog tour. I'm a huge fan of Pepper Winters so it's always a pleasure to have her on our blog sharing with you her newest work. 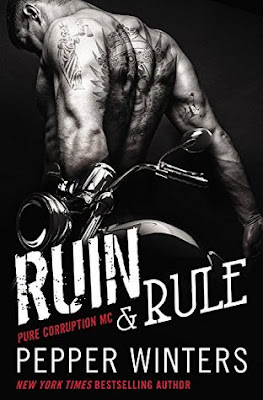 "We met in a nightmare. The in-between world where time had no power over reason. We fell in love. We fell hard. But then we woke up. And it was over . . ."

She is a woman divided. Her past, present, and future are as twisted as the lies she's lived for the past eight years. Desperate to get the truth, she must turn to the one man who may also be her greatest enemy . . .

He is the president of Pure Corruption MC. A heartless biker and retribution-deliverer. He accepts no rules, obeys no one, and lives only to reap revenge on those who wronged him. And now he has stolen her, body and soul.

Can a woman plagued by mystery fall in love with the man who refuses to face the truth? And can a man drenched in darkness forgo his quest for vengeance-and finally find redemption? 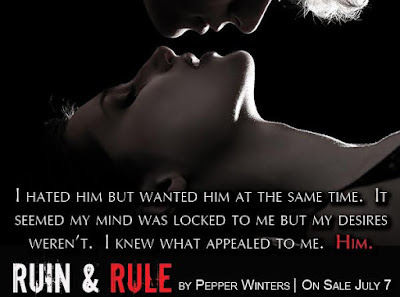 My first official taste of an MC book and I seriously loved it!!

Right from the first page I was drawn in, we're thrown right into a chaotic situation, the emotions Cleo was going through were seeping through the pages.... Anxious, scared, impassive, confused, lust.. I felt them all.

As always with Pepper Winters style, by the first half of the story we have a million questions running through our heads, slowly throughout the second half it all gets revealed to us and one is as unexpected as the other. I loved how Pepper ventured away from her normal dark erotica stories, and brought something sensual & passionate yet still a little wicked. She's done an amazing job.

I just loved Cleo, she's got balls. Even in her situation she still manages to keep her cool and use her head to make things work to her advantage. Can you imagine waking up to the horror of being kidnapped and not even remembering who you are? That was her reality and we're right along side with her. Scary shit!!!

Kill aka Arther (Art) is a strong, hardcore leader of a biker club called Pure Corruption. Yet underneath all the tough exterior lies a vulnerable side he doesn't show often. Kill is on a vengeance mission and will stop at nothing to get it.
He did frustrate me a little with all his secret keeping, I wanted to give him a good clip around the ears several times so he'd divulge it all.That's just me being extremely impatient haha! I still love him.

"I'll tell you how we know each other." His head bent, pressing his lips against my ear. "I'm your worst fucking nightmare and now I've got all the power."

A storyline with so many twists and turns we're left wanting more, characters you'll fall in love with and feel connected too. Hot, smouldering, panty wetting sex that'll leave you breathless. This book has it all.

If you like your characters a little rough around the edges than I recommend picking yourself up a copy of this book. 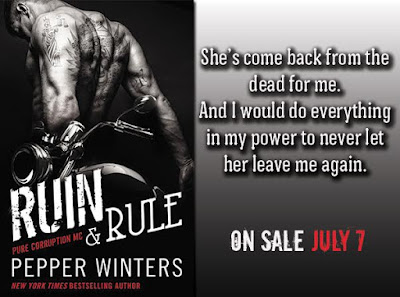 Prologue
We met in a nightmare.
The in-between world where time had no power over rhyme, reason, or connection. We met. We stared. We knew.
There was no distortion from the outside world. No right or wrong. No confusion or battles from hearts and minds.
Just us. In our silent dreamworld.
That nightmare became our home. Planting ghosts, raising fantasies. Entwined together in our happily skewed reality.
We fell in love. We fell hard.
In those fleeting seconds of our nightmare, we lived an eternity.
But then we woke up.
And it was over.