Welcome to our stop on the Darkness Becoming blog tour, today we'll be sharing with you an excerpt from the book and an amazing giveaway you don't want to miss out on. Enjoy!! ^_^ 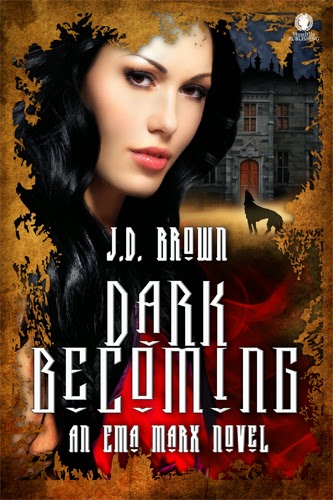 Ema Marx is in a race against time. Or rather, a race against Apollyon. A powerful weapon—the legendary philosopher’s stone—could tip the scale in favor of whoever gets their fangs on it first. For Ema, obtaining the stone is an uphill battle through love, alliance, heartbreak, and loyalty. Winning should mean the beginning of beautiful things, but the closer Ema gets to her destiny, the more uncertain her future becomes. Could it be this war was never meant for her? And why the heck doesn’t morning sickness adhere to rules of its own name? 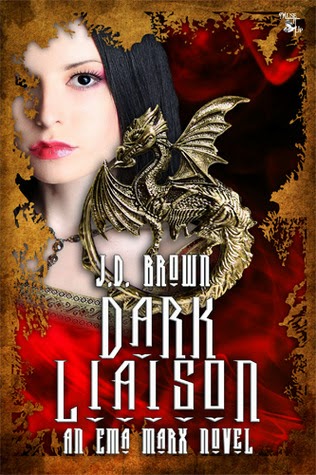 Ema Marx wishes her life would go back to normal, but there’s nothing normal about being a Romani-Vampyre with an ancestor who wants you dead. Apollyon is back, wreaking havoc on the lives of everyone she cares about while plotting her demise. Ema thought she would find a new best friend in her trainer, Bridget, until the exotic vampire vies for Jesu’s attention. Jesu can date who he wants, right? Ema has more important things to worry about, like honing her powers. When Apollyon’s thugs appear out of the shadows to attack her, Ema knows it’s time to take action. But everyone else has other plans in mind. One thing is for certain, being under house arrest in the German vampyre king’s castle was not part of her plan to save the day. 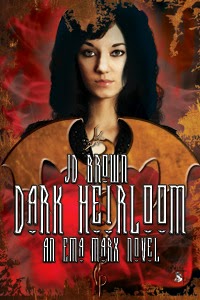 “You’re a vampire” is so not what Ema Marx wants to hear when she wakes from a two-day coma in a cryptic yet exquisite castle in northern Finland. Unfortunately, it explains a lot. Like why she’s able to see in the dark and walk through solid objects. What she doesn’t understand is why the other vampires expect her to have all the answers. It’s their fault she turned into one of them…right? Jalmari’s hatred for his old-man intensifies when he’s ordered to bring that troublesome girl to their castle. He has a clan to run, there’s no time for babysitting newborn vampires no matter how they were converted to their culture. But when a two-thousand-year-old premonition threatens to take the crown and his life, Jalmari sees no other choice than to take out the catalyst. Ema Marx. Fortunately for Ema, she could also be the clan’s only savior. The race to figure out her vampiric origins is on. And maybe she’ll get the hang of the blood-drinking gig along the way.
Amazon / Kindle
Barnes & Noble / Nook
iTunes
Muse It Up Publishing
Smashwords.com 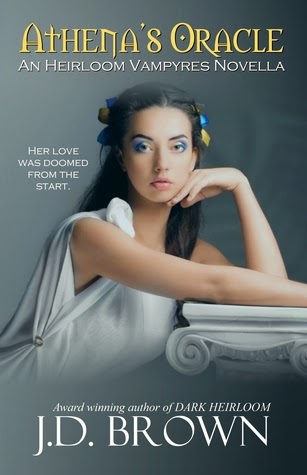 Leena’s ‘gift of sight’ secures her place as the next great oracle of Athena. Instead of being groomed for wifehood like other girls, Leena spends her days within the walls of the Acropolis, shuffled around by the clergy and doomed to be a virgin forever. Before her ascension, Leena decides to take matters into her own hands. With the help of her father’s book of alchemy, she casts an incantation calling forth her own personal hero. But when that hero turns out to be a rogue vampyre prince with a haunted past, Leena begins to question if her feelings for him are the work of divine intervention, or a love spell gone horribly wrong. Athena’s Oracle is a prequel to the novels Dark Heirloom and Dark Liaison, also by J.D. Brown. Set in 4th century B.C.E., Athena’s Oracle chronicles the romance between Leena and Jalmari during the very early trials of their immortal lives.


The bullet missed my eye by two inches. It flew past my temple, grazed a few strands of hair, and struck Jesu’s Adam’s apple.


Time slowed. I turned to face him and my heart stopped at the sight of blood trickling down his neck. His arms fell away from my waist and he staggered back one, two steps. He lifted a hand to the wound, his emerald gaze widened in shock. He took a third step back—and toppled over the edge of the loft. My breath hitched as I flung my hands into the air to grab him, but I was too late.


Jesu hit the dirt floor of the barn with a heavy thump and I screamed. I dove onto my stomach and scrambled to the ledge. Digging my fingernails into the wooden floorboards, I glanced at the scene below, heart pounding.


Jesu landed on his back, his arms and legs splayed, his long hair tossed across his face. His eyes were open underneath, but they didn’t move—didn’t blink. He lay so still—too still. My blood ran cold. Terror erupted from my lungs.


My cry drew a chorus of pops and snaps. Frantic, I glanced around the empty space, not understanding the strange sounds until, from the shadowy corners of the moldy barn, emerged a group of nude Alpan vampires. Several more dropped from the ceiling, shifting from arachnid to humanoid form in mid-air.


King Nikolas’ soldiers. They responded to my shouts of distress, inching closer to Jesu with looks of concern.


I need to get to Jesu. My hands trembled as I pushed to my knees and crawled toward the ladder. My nerves shook too much to phase or fly. Where did that shot come from?


My fingers almost reached the first rung when a hand gripped my shoulder and yanked me through the air. I landed on my spine, hitting the rickety loft floor. A cloud of dust rose from the impact, blurring my vision. The silhouette of a man appeared through the haze. He straddled my stomach and used his weight to pin me in place. Pale ring-clad fingers gripped my neck and squeezed. Two blades sliced the skin under his choking grip and a searing pain cut through my flesh. A wet stickiness oozed over my neck and soaked the collar of my shirt. Gasping under the pain, I jabbed my fingers between his and tried with all my might to pry off his hands. Feeling the odd shape of his rings, each one fused to the next, I realized he wore some sort of brass knuckles weapon with a knife fixed to the underside. The man wasn’t just trying to choke me to death…he meant to sever my head. The dust settled and my gaze flew over his black leather attire. His chin-length mass of thick black hair fell over his face, obscuring his identity, but that didn’t matter. I’d recognize him anywhere. His methods were entirely too familiar.


A breeze blew in from the missing portion of the upper barn wall and lifted his hair, confirming what I already knew. His dark green irises shone in the moonlight and he grinned, flashing each one of his razor sharp fangs.


Every ounce of fear from a moment ago transformed into red-hot fury. I lifted my knees and pushed my feet against the floor, rolling us both onto our sides. I willed myself to de-solidify, but his grip kept me firmly in the third dimension. He levitated, still holding me by the neck. The blades cut deep, lodging under my flesh as my toes left the floor and my weight became a disadvantage. Not having any other choice, I used my ability to levitate with him, countering gravity to lessen the death grip around my windpipe. Together, we rose through the collapsed side of the roof, out into the night. I glanced down just in time to see the Alpan soldiers clambering up the ladder. They were very small and blurry in the periphery of my vision.


I rolled my eyes at the derogatory taunt, but didn’t respond. For one thing, his weapon still carved into my throat and I worried speech would accelerate further damage. Secondly, he was wrong. The Alpans could shape-shift, which meant they could turn into birds and peck Jalmari’s stupid eyes out. I wasn’t going to wait for their help, though. I could be headless by then. My throat swelled as the blades neared my trachea. The edges of my vision darkened to a hazy gray and my lungs burned in protest. I was going to pass out from lack of oxygen before he killed me. 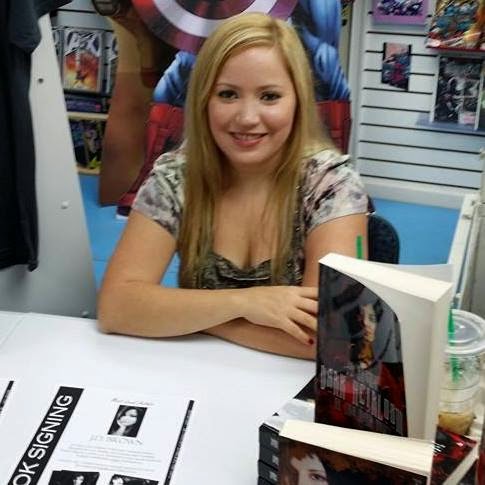 J.D. Brown knows that vampires exist because she’s dating one and no, he doesn’t sparkle. Unfortunately, he’s not immortal either (or maybe her standards are too low). A magnet for subcultures and weirdness, J.D. was that socially awkward girl with more fictional friends than real ones. As a child battling a hearing loss and Muckle-Wells Syndrome, J.D. found comfort in books where strong women always saved the day and got the guy. An obsession with Charmed, Sabrina the Teenage Witch and Buffy the Vampire Slayer led J.D. to believe that her mutated chromosome made her something more, not something less. Thus her stubborn flare to persevere was born. A lover of fine cuisine, coffee, and shoes, J.D. never understood why shoe stores don’t serve Starbucks and soufflé. She resides in Wisconsin were she writes urban fantasy—aka vampires for adults—and has political debates with her dogs. She loves to hear from fans and is active on http://Facebook.com/AuthorJDBrown


One Lucky Winner
will receive a FREE thumb drive
with over 100 FREE eBooks
from over 100 different authors
downloaded inside!