Cover Reveal - The Line that Binds by Carolyn LaRoche 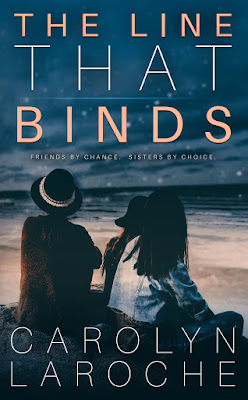 Eleanor Hart loved the same man almost her entire life. When her husband Gary, a Virginia Beach police officer, is killed in the line of duty, her whole world is torn apart. One minute she's drinking margaritas with her girlfriends, and the next, she's planning a funeral. Her two best friends, Vivian and Marietta, wrap their love and friendship around her while doing their best to support their husbands who were witnesses to the brutal murder of their friend and colleague. They fight to keep their marriages together amidst depression, guilt, grief, alcoholism, and PTSD. Through the enormity of the loss, they discover the true strength of their friendship. With plenty of hugs, tears, wine, and ice cream, the three friends navigate the complicated aftermath of Gary's death. Together they can handle anything.

Strengthened by The Line That Binds. 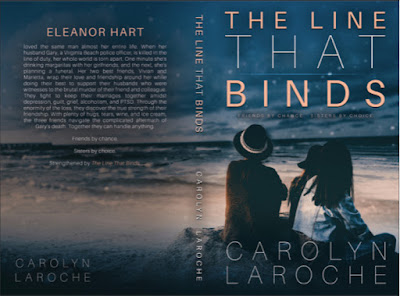 Vivian came out of the walk-in closet holding a small wood box. "Hey, Ellie, I found this on the shelf under his jeans."

Vivian handed it to her. Eleanor set it on the dresser before flipping the top up. Inside sat a miscellaneous collection of items. Eleanor picked up the photo off the top of the pile. It was one of the two of them, Gary in uniform and Eleanor pinning his badge to his chest. They both looked so young, so expectant and happy for the future to come. She touched his face with her finger, wishing it were really him. "This is at Gary's academy graduation."

"I've never seen this one before." Vivian took the photo and turned it over. "Look, he wrote something on the back."

She handed the photo back to Eleanor. She turned it over and recognized Gary's tight script. He'd only written two words: My love.

Eleanor held the photo to her heart. "He never came across as a romantic man but maybe he really was."

"Judging by the things he held onto, I'd say he was very romantic." Marietta pushed the box toward her. "Look."

She did. The next things she saw, the twins' hospital bracelets from the day they were born, brought moisture to her eyes. She thought she'd thrown those away. A cocktail napkin from their favorite date night spot, a seashell painted with the words St. Lucia from their honeymoon, the first pair of cufflinks she'd ever given him. She'd found them at a tag sale. They weren't worth anything but the crystal blue stones had exactly matched the color of his eyes.

"I can't believe he kept all these things." Eleanor wiped at her eyes and sniffed.

"And now he's gone and this is what I am left with." Eleanor pushed the box away.

Marietta reached in and pulled out a pink hair tie. "But, what if that is why he saved all these things? So, that if something ever did happen to him, you'd know the things that were important to him and how much he loved you."

"Maybe." Eleanor took the hair tie from Marietta. "I used to wear that all the time when the twins were babies. They liked to yank my hair so I kept it braided. I'd wondered where it had gotten off to."

"This is your piece of Gary. He left it behind for you," Vivian said.

She nodded, her eyes filling with tears. "I had no idea he'd been doing this all these years."

"Do you want to look at the rest of it?" Marietta asked. "We can leave you alone for a few minutes."

Eleanor reached for a tissue on her nightstand and blew her nose. She shook her head. "I can't right now." Eleanor closed the lid. "If I go through the rest of this now, I'll never get these clothes taken care of."

"The clothes can wait, Ellie," Vivian said. "If you want them to."

"No. I'm not ready to look at it all now." She picked up the box and walked over to the night stand. Pulling out the drawer, she tucked the box inside and closed the drawer again. She needed to look at the rest of the contents when her heart wasn't so fragile. Preferably alone so she could take the time to cherish each item's memory. 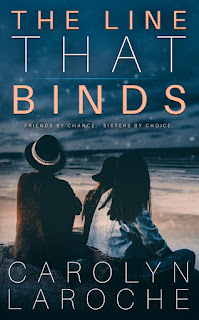 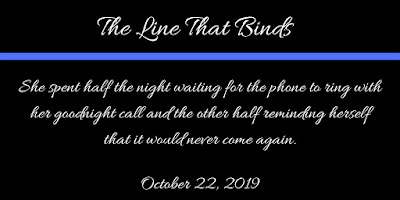 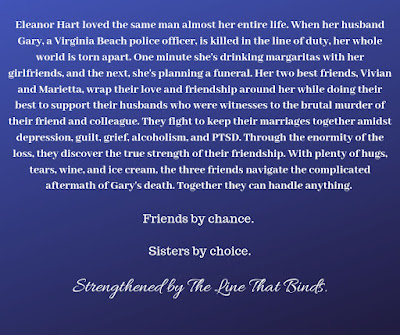 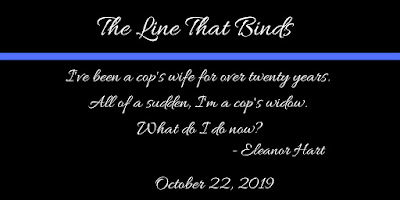 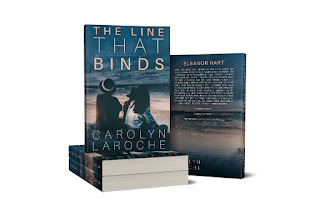