In Case You Didn't Know by Samantha Chase

It's time to go back to Magnolia Sound! IN CASE YOU DIDN'T KNOW by Samantha Chase is out now - lovers of small town romance won't want to miss this one! 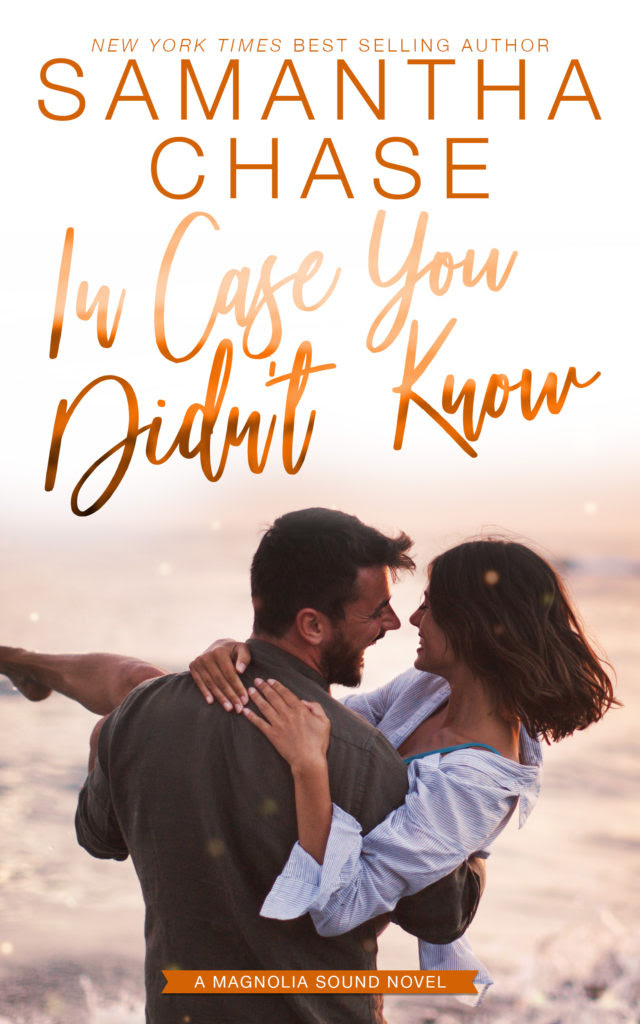 About IN CASE YOU DIDN'T KNOW

Golden child Mason Bishop has finally had enough. Tired of bearing the weight of his parents’ expectations, he’s determined to break free and forge his own path. It’s time for him to go after the things he really wants—including the girl he never forgot.
Scarlett Jones is done being ruled by her insecurities. She’s ready to be see as something other than one of the guys, and she’s done thinking she’s not good enough for the social elite—especially the Bishops.
When he runs into Scarlett at a concert, Mason believes it’s fate bringing them together. But fate only gets you so far. If he wants a real chance with Scarlett, it’s going to take a whole lot of charm to convince her he’s worth it.
Add IN CASE YOU DIDN'T KNOW to your TBR!

Get your copy of IN CASE YOU DIDN'T KNOW today! Amazon | Apple | Nook | Kobo | GooglePlay | Audible 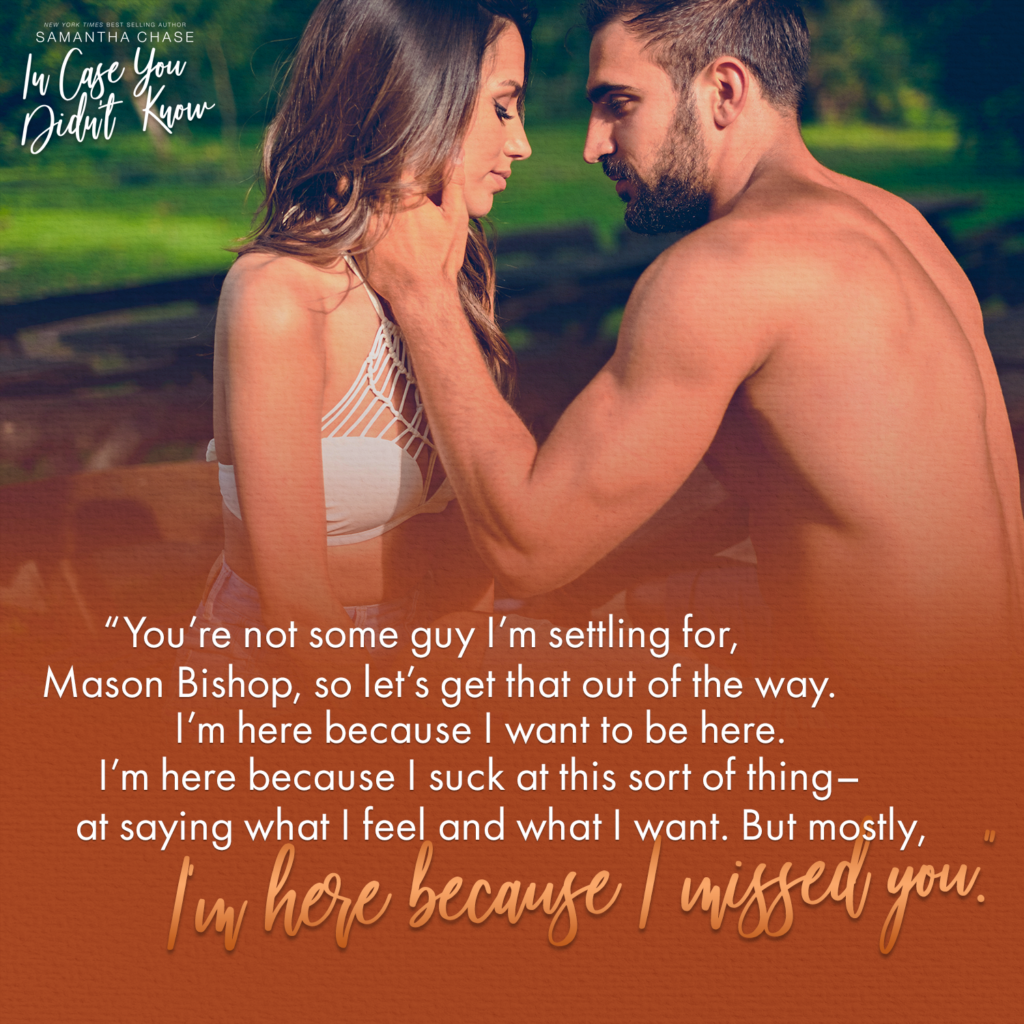 “Don’t go,” he said, moving in shamelessly closer. Scarlett could feel the heat of his body, could smell his cologne and all thoughts of going back to her spot in the nosebleed section were forgotten. “I mean…what’s the hurry?”
Scarlett tried to think up something witty to say, but her mind was a complete blank.
Okay, that wasn’t totally true. She was thinking about how in a perfect world she could have just said yes–that she’d love to go out with him after the concert. Or better yet, that she could just go back to his celebrity section and watch the rest of the show together.
“C’mon,” he said, interrupting her thoughts. “If you won’t go out with me later, hang out for a bit now.”
And then she completely embarrassed and horrified herself.
She giggled.
God, she hated women who did that.
She was one step away from twirling her hair and Scarlett knew she needed to get herself under control.
“Have a drink with me,” he prompted.
“I really just wanted some water.”
“Then we’ll have water.”
Her laugh this time wasn’t quite so girly, but there was a huskiness to it she didn’t recognize either. “You can drink whatever you’d like. You don’t have to be lame just because I am.” Standing this close to him, she could smell the beer on his breath so she knew he was most likely out here to grab another one.
“I don’t think you’re being lame, Jones,” he said playfully, being a total flirt. “I think it’s hot as hell out here and it’s probably the smarter choice than what I was thinking.”
“Well…I try to be practical.”
Wow. Way to sound appealing, dork.
His grin was downright boyish and if she wasn’t mistaken, he moved a little closer. Only…she didn’t feel crowded by him. If anything, she wished she were bold enough to do the same.
“Practical can be good,” he commented. “But sometimes it’s fun to be a little…impulsive.”
Oh my…
Swallowing hard, she nodded. “Are we still talking about beverages?”
And yeah, that totally wasn’t her voice.
Mason let out a low groan and slowly licked his bottom lip and Scarlett couldn’t believe how incredibly attractive she found the move. Her eyes traced the movement and when she looked up and met his steel-blue eyes, she felt like everything around them faded away–the crowds, the noise, the music–and all that was left was the two of them.
It didn’t seem possible and her first thought was how she was just feeling this way because it had been so damn long since she’d been with a guy. But the longer they continued to look at each other, the more she realized it had nothing to do with how much time it had been–it was all him. All Mason. And as much as she wanted to be annoyed by that fact, she couldn’t seem to make that happen. Whatever was happening was happening, and she was more than willing to let it.
What was the harm in hanging out with him for a bit? Hell, what was the harm in flirting? It wasn’t as if this were going anywhere and there was no one around to tell her he was out of her league or to remind him how he shouldn’t be hanging around with someone so beneath his social status. Right now they were just a man and a woman maybe having a drink and a little conversation.
Flirty conversation.
She could do that, right?
For a little while, she could be the girly-girl no one thought she could be and have the full attention of one of the most eligible bachelors in town. How hard could it be?
Doing her best to relax, Scarlett smiled up at Mason. “So, we were going to have an impulsive drink, right?”
His grin was slow and sexy as hell. “Well, that would have been my request for after the show. But since you have plans…”
She shrugged. “Then I guess we should do it now before we both miss the entire concert.” Her tone was light and carefree and she had to admit, it felt good.
“Stay right here,” he said anxiously before sprinting over to the drink kiosk. Scarlett wasn’t sure how he did it, but he managed to be back with two bottles of water in less than a minute. It was almost as if the small crowd parted for him and let him skip to the front of the line.
And seriously, that wouldn’t surprise her at all.
“Thanks,” she said, accepting the drink from him. “But you seriously could have gotten something else.”
“And risk taking too much time away from the little we have?”
Rolling her eyes, she couldn’t suppress her laughter. “Dude, seriously? That has to be the cheesiest line ever!”
Luckily, he laughed with her. “Oh, I don’t know about that. I think I could come up with a few more if you gave me the chance.”
Her curiosity got the better of her and she wanted to know what exactly the infamous Mason Bishop considered to be cheesy pickup lines. “I’m giving you the chance. Lay them on me,” she challenged as she leaned against the cool brick.
His eyes went wide. “That’s how you want to spend our time?”
That just had her laughing again. “I’m sure there are better ways, but I thought I’d see if you were up for the challenge.”
Oh my God…I did not just say that!
His gaze turned a little heated and he took a quick drink before bending down and placing the bottle on the ground. When he straightened, he mimicked her pose against the brick. “Challenge accepted.”
“Bring it on.”
And she only partially meant the cheesy lines.

Don't miss the rest of the Magnolia Sound series! 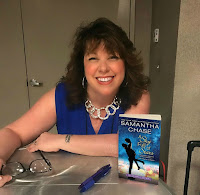 Samantha Chase is a New York Times and USA Today bestseller of contemporary romance. She released her debut novel in 2011 and currently has more than forty titles under her belt! When she’s not working on a new story, she spends her time reading romances, playing way too many games of Scrabble or Solitaire on Facebook, wearing a tiara while playing with her sassy pug Maylene…oh, and spending time with her husband of 25 years and their two sons in North Carolina. Website | Twitter | Facebook | Instagram | Newsletter | BookBub
Posted by Renee Booth at 12:01 AM