"Out of all the stupid things I could have said and done, insulting the rich and influential guy who could make or break our business has probably topped the charts. Calling someone a creep isn’t so bad, is it?"

All is fair in love and business…

My friend’s plan is pretty simple: win the bachelor auction in a charity event and get the most influential man to sign a business deal with us. It’s a do or die situation. But plans rarely go as you would expect.

When the bids begin to take ginormous proportions, my friend can’t stop in her rush of excitement. We don’t have the money. We can’t afford him, and yet, before I can even comprehend what’s happening, we’re the highest bid.

“The bachelor” aka Tyler Becks isn’t old and ugly. He isn’t very business-like, either. In fact, it’s hard to imagine that someone with his brain and bank account can be this sexy.
He understands our cash-strapped situation and is kind enough to cancel the bid. Let us out of the contract. No hard feelings. Or so he claims.

He’s even kind enough to want to work with us. With me, in particular. I can’t refuse, even though working for him means I have to see him every day. My future depends on it.

I won't let my guard down. I won't fall for him, and particularly not now that I know he’s hiding something from me. Everything comes at a price. Even Tyler’s generosity. 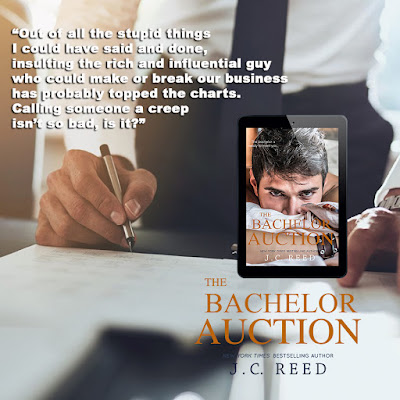 THE BACHELOR AUCTION by J.C. REED is now live!