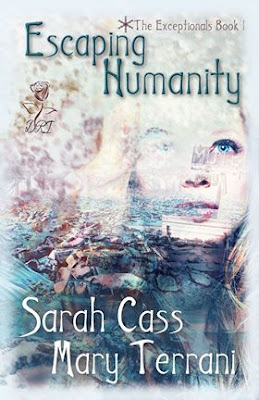 Exceptionals are being hunted for slaughter.

It’s the year 2023, and a government-created virus meant to
produce an army of super soldiers has activated a hidden gene in half the
population. The end resulted gave them superhero-like powers. Decades of covert
operations, followed by an all-out war to destroy this new race has left the
country decimated. One group of these Exceptionals is out heal the world. They
take in stranded Exceptionals, and fight against the army trying to kill them
all.

Their efforts lead them to Annie, a young woman in New York
City who doesn’t realize the danger she is in. The rescue takes a side turn
that leaves them in a scramble to save her life.

Meanwhile, hidden deep in the compound of General Steele,
the man in charge of the soldiers, two key Exceptionals are being held against
their will. They have a plan for escape, which could lead to freedom, or
certain death.

These two branches of rebel Exceptionals are in a fight for
their lives. Only problem is, in a world that is out of glass slippers and
fairy godmothers, not everyone can make it out alive.

The flight to the compound seemed normal, uneventful even.

As uneventful as escaping from soldiers chasing them, a woman that could sprout wings and fly, a decrepit old barn, and an aircraft that appeared to be held together by duct tape and bubble gum could possibly be.

Annie wondered briefly if bubble gum still existed. Contemplations like that were the best distraction she had as she kept her eyes screwed shut for the duration of the flight. One hand clutched the bag on her lap while the other dug into what was left of an armrest.

Solid ground. Was that too much to ask?

The other passengers talked the entire flight. No, they picked on each other. Now and then for a brief moment she could have sworn she heard a smile, almost laughter, in James’ voice. Such a thing seemed unlikely. She held the conviction he’d been born scowling.

“Anna, we’re here.” James spoke close by. His voice stirred her to open her eyes. He towered over her, arms folded across his chest.

Mission accomplished and he still appeared permanently pissed off. “And where is here exactly?” Did he ever smile? Annie rolled her neck from side to side in an effort to get rid of some of the stiffness.

“Montana. What’s left of it anyway. As wide open and unpopulated as the state was, it didn’t get hit as bad as states with major cities.” He tapped his foot in a quick cadence against the metal floor. “We need to move.”

“Right. You’re the impatient one.”

If James stood as the group’s version of a welcome wagon, the reason for their dwindling numbers couldn’t be clearer. “It’s Annie. Please. Anna is my grandmother’s name.”

A scoff escaped his gritted teeth.

She pushed on the armrest, not at all surprised when it tumbled to the floor. Her eyes fluttered shut. “Sorry.”

She muttered under her breath, “So much for finding my parents before I kick the bucket.”

“Anna—Annie,” he corrected himself. “You can’t think like that. It could still happen.”

“Right. Next, you’re going to tell me Santa Claus, the Easter Bunny, and the Tooth Fairy are all downstairs.” She pressed her lips together tight in an effort to reign in her emotions. Even with that, her fingers shook on their way to grab the strap of her bag. “I’m sorry. This whole thing is just…well I don’t know what it is.”

James’ expression softened. “I know it’s a lot to take in. I can explain more once we are inside where it’s safer.”

For the first time since they landed she realized they were alone. “Where are the others?”

“They had something to take care of.”

So, they left her stuck with tall, dark, and angry? Great. “Lead the way, then.”

Off the plane they wound up on a broken-down street. Several houses lined what she imagined had once been a nice, suburban sort of street bustling with kids and soccer moms in their SUV’s. Hard to believe it would have been only a year ago when the world had blown up. The way nature had already taken over, it seemed like ages since the street had seen any regular traffic.

They walked into the first house on the right without so much as a knock. She wanted to ask why they didn’t stop in any rooms, but held herself back. Despite the fact that he led her straight toward a door that framed steps descending into a basement, she followed him.

She’d already come this far and really, where would she go? A maniacal sort of giggle filled with nerves and humor over the craziness bubbled to the surface. “You pull me from my home to a place in the middle of nowhere and the first place you take me is a basement. This isn’t serial-killer worthy at all.”

“Hard to have serial killers with so few people to kill…and not everything is as it seems, smartass.” The barest hint of a smile graced his features before he wiped it clean away.

“Careful. You almost smiled there. I might begin to wonder if you were feeling well or not.” Another laugh reached for the surface. “Sorry. If I don’t laugh I’m liable to end up thinking I’m in an episode of the Twilight Zone.”

James jogged down the steps without turning around. “We all do whatever we have to get by.”

He led her straight to a dead end. The room looked like any normal basement before or after the War. Shelves with boxes and canned foods lined the walls. A few bags here and there on the shelves and floor lent to the general idea of a still-functioning home.

Then James reached through a few of the boxes and things got weird again.

The wall moved. It swung inward to reveal a wide metallic corridor. The bags remained on the floor where the shelves had been, but with a simple step over them they’d be in whatever that place was. Before the wall had moved, Annie had seen no sign of a seam in the wall at all.

She blinked several times. “And this day just keeps getting weirder.”

“You haven’t seen the half of it yet.” James motioned for her to go through ahead of him. “Every house in the area has an access port like this.”

“Not everyone. We take turns staying topside. We’re still human, we still need sunlight.” He paused at an intersection in the tunnel. “That leads to the house next door.”

“But it looks so deserted up there.” She scanned the tunnel as they kept walking. After walking a few feet, a familiar sensation hit her like a ton of bricks. Once she hadn’t felt in a while. A rush of energy that left her near giddy. Computers—lots of them. “You have a full functioning computer network.”

“Yeah. No getting any ideas, though. Cy has them locked down tight. You won’t get anywhere no matter how hard you try.”

“No ideas. It’s just an odd feeling after not being able to feel it for so long.” She trailed her fingers along the wall. The construction impressed her. “The tunnels haven’t always been here, I’m assuming. So how did they get here?”

“We have a few mutants that are good with that sort of thing.” He shrugged as he punched in a code to open the next section. “We have a few…uh…containment cells in here.”

“Containment cells? I thought you said you were the good guys.” Annie took a step away from the door. She searched for another path they could take.


Sarah Cass' world is
regularly turned upside down by her three special needs kids and loving mate,
so she breaks genre barriers; dabbling in horror, straight fiction and urban
fantasy. She loves historicals and
romance, and characters who are real and flawed, so she writes to understand
what makes her fictional people tick.
And she lives for a happy ending - eventually. And enough twists to make
it look like she enjoys her title of Queen of Trauma Drama a little too much.


An ADD tendency leaves
her with a variety of interests that include singing, dancing, crafting, cooking,
and being a photographer. She fights through the struggles of the day, knowing
the battles are her crucible; she may emerge scarred, but always stronger. The rhythms to her activities drive her words
forward, pushing her through the labyrinths of the heart and the nightmares of
the mind, driving her to find resolutions to her characters' problems.


While busy creating
worlds and characters as real to her as her own family, she leads an active
online life with her blog, Redefining Perfect, which gives a real and sometimes
raw glimpse into her life and art. You
can most often find her popping out her 140 characters in Twitter speak, and on
Facebook.


Mary Terrani lives a chaotic life as the mother of two rambunctious boys of the teen and tween variety. They keep her on her toes on a regular basis, so she’s happy to get lost in other worlds. Her long-standing passion for the written word drives her need to create chaos with her pen that only she can solve. She loves to dabble in many genres, from young adult to paranormal, and even a post-apocalyptic piece she’s co-writing with fellow author, Sarah Cass.


When she’s not writing, Mary can be found in a variety of activities including knitting, gaming, and anything involving her favorite geekdoms. Mom, author and all around geek she loves spending time with her family. 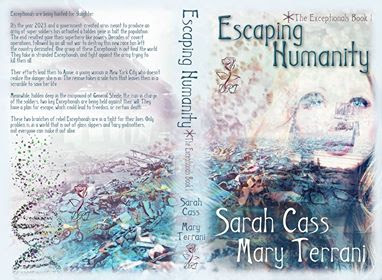