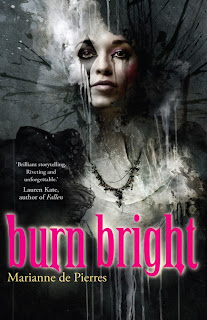 In Ixion music and party are our only beliefs. Darkness is our comfort. We have few rules but they are absolute . . .

Retra doesn’t want to go to Ixion, the island of ever-night, ever-youth and never-sleep. Retra is a Seal – sealed minds, sealed community. She doesn’t crave parties and pleasure, experience and freedom.

But her brother Joel left for Ixion two years ago, and Retra is determined to find him. Braving the intense pain of her obedience strip to escape the only home she’s ever known, Retra stows away on the barge that will take her to her brother.

When she can’t find Joel, Retra finds herself drawn deeper into the intoxicating world of Ixion. Come to me, whispers a voice in her head. Who are the Ripers, the mysterious guardians of Ixion? What are the Night Creatures Retra can see in the shadows? And what happens to those who grow too old for Ixion?

Retra will find that Ixion has its pleasures, but its secrets are deadly. Will friendship, and the creation of an eternal bond with a Riper, be enough to save her from the darkness?

Listen well, baby bats. Burn bright, but do not stray from the paths. Remember, when you live in a place of darkness you also live with creatures of the dark.

Review: When I first saw Burn Bright I was drawn in by the amazing cover. I'd heard so many great things about this book so i bought it and I wasn't disappointed.
Marianne has opened a new and exciting world, one that will suck you in and have you on the edge of your seat through the whole book.

When i started reading Burn Bright I wasn't sure what to think, this world is completely different to anything i've ever read. It's refreshing, phenomenally creative and takes you on a journey full of danger and suspence.

Twice a year a barge comes during the night to take the unhappy runaways to a world of  uninhibited freedom, with music and eternal pleasure. Where desires are acted upon without care.

Retra is not like the other young runaways taking the journey to Ixion, she only wants to find her brother Joel, who escaped Grave to find a life without restrictions. He's the only one she's ever been able to talk to freely and form a bond with.

Modesty is a sin.

For Retra being raised with her every move dictated by family and the council also having to wear a veil to conceal herself, this new world comes as a complete shock. Ixion changes Retra dramatically, she starts to open herself up to possiblities and friendship.

We get to meet some amazing secondary characters... Markes who is handsome, brave and a passionate musician. Cal she's just plain nasty! Suki, now she's just amazing! Just out to have fun and brighten her boring life. Rollo a courageous boy who's come to Ixion to uncover the truth.
Then we have the sexy Lenoir who's one of the Gardians of Ixion, he saves Retra's life and which fused a bond between them.

We are left in suspence waiting for Angel Arias book 2 of the series. Comes out late 2011

Australian Author Marianne de Pierres has done a fantastic job with her brilliant storytelling.
This is a book i could read over and over again and i would recommend this book to anyone.