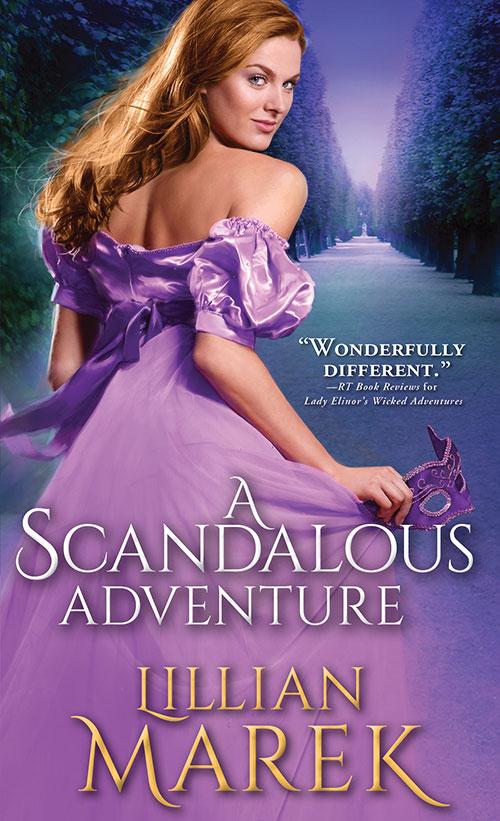 When his monarch’s flighty fiancée disappears, Count Maximillian von Staufer is dispatched to find her. His search leads Max to discover not the princess, but a look-alike who could be her double. Desperate to avoid an international crisis, he conceives a plan that will buy some time—and allow him to get to know a beautiful Englishwoman.


And time is running out

Lady Susannah Tremaine and her young friend Olivia are staying at the Grand Hotel in Baden, where so far the most exciting part of the visit has been the pastries. But when a devastatingly handsome royal Germanic officer asks Olivia to impersonate a missing princess, Susannah finds herself drawn into a dangerous world of international intrigue as she tries to protect her friend—and her heart.

Lillian’s Marek’s Travel Tip: Since sunscreen may not be available, always carry a parasol, preferably with a steel shank. This will keep your nose from getting red and is always useful for poking villains in tender spots.


Lady Susannah burst into their hotel sitting room and marched furiously about, her hoops swinging wildly about her, endangering the ornaments cluttering the numerous small tables. It was most unladylike behavior. She did not care. She did not feel ladylike at the moment. Far from it. “Of all the improper, infuriating, arrogant, high-handed, overweening, pompous, insolent…” She pressed her lips tightly together.

“Have you run out of adjectives, dear?” asked Lady Augusta as she untied her bonnet and set it aside. “That was exciting, was it not? Positively exhilarating. But now, if you will excuse me, I believe I will take a short nap. Enjoyable though that little interlude was, I am not accustomed to so much excitement.” She smiled cheerfully at the girls and walked to her bedroom.

“Oh dear,” said Olivia. “Did we hurry back too quickly? Have we tired her out excessively? She was walking quite energetically on the way back. More energetically than usual. Unless that’s why she’s tired now.” She sat down on the sofa of their sitting room and looked worriedly at the door Lady Augusta had just closed.

Ignoring them both, Susannah continued to pace about, pulling off the remains of her hat. Its ribbons hung down dirty and dispirited. It looked as if that…that creature had stomped on it. “Look at this! It’s battered out of recognition. And it was my favorite.”

Olivia looked around at that. “It was? I thought you said this morning that you didn’t care for it and you wished the wind would blow it away.”

Susannah had the grace to look a bit embarrassed. “Well, all right. It wasn’t my favorite. But that doesn’t mean I want some ill-mannered behemoth to be responsible for its demise.”

“He was enormous, wasn’t he?” Olivia shivered delightedly. “Almost frightening, like the villain in a novel. Or the hero. You know—the dark, brooding one you can’t be sure about. You were really quite brave, the way you stood up to him.”

“Frightening?” Susannah raised her brows. “I wouldn’t call him frightening. And he certainly wasn’t brooding. He was even laughing at me. Maddening is more like it. Aggravating. Infuriating. Insufferable. I’ve never been treated in such a way.”

“But he was so very big. And he was so angry that he certainly frightened me when he appeared out of nowhere.”

Susannah wasn’t listening. “Maddening,” she repeated. “Insulting. Completely ill-mannered and boorish. Paying absolutely no attention to anything anyone was saying. He had one idea inside that thick skull of his, and nothing anyone said would even penetrate.”

Olivia tilted her head to the side and considered. “Well, he did listen to Lady Augusta. At least, he did eventually.”

“Ha. Listen to her, did he? He certainly didn’t believe her. Didn’t you notice that he followed us back to the hotel?” Susannah flopped down onto a chair and scowled.

“He did?” Olivia sat up in momentary alarm. “How do you know? You weren’t looking behind us.”

“I didn’t have to. There are so many windows on the Kurhaus that they reflect everything several times over. Shop windows too.”

“Does that mean he knows where to find us?”

“Well, of course he knows where to find us. Aunt Augusta told him where we are staying, remember? He was following us because he thought she was making it all up. He’s obviously incapable of recognizing the truth when he hears it. As if a lady like Aunt Augusta would tell lies.” Susannah sat up straighter and drummed her fingers on the arm of the chair. She ignored the fact that Aunt Augusta was capable of making up all sorts of tarradiddle if it amused her.

“Oh.” Olivia sat there chewing on her lip for a long minute. “Does that mean he still thinks I’m that princess? Is he likely to try to drag me off again? I don’t think I would care for that.”

“I wouldn’t worry about it if I were you. If he has any sense—and I’m not saying he does—but if he has any intelligence at all, he will ask about us at the hotel, and they will tell him how long we have been here. Sooner or later he will have to accept that we are who we say we are. After all, he can’t refuse to believe everyone in Baden.”

Unable to sit still any longer, Susannah sprang up, shook out her skirts, and strode over to the window. Holding the heavy velvet drape to the side, she looked out at the busy street in front of the hotel. Busy, but not hurried. People walked slowly, many of them with the aid of canes. Even the horses pulling the open carriages plodded along, moving scarcely faster than the pedestrians. Every now and then a breeze would come along to swirl the leaves that had begun to fall. How depressing that the most exciting sight from her hotel window was the dance of autumn leaves.

Lillian Marek was born and raised in New York City. At one time or another she has had most of the interesting but underpaid jobs available to English majors. After a few too many years in journalism, she decided she prefers fiction, where the good guys win and the bad guys get what they deserve. The first book in her Victorian Adventure series, Lady Elinor’s Wicked Adventures, won first prize in both the Launching A Star and the Windy City Four Seasons contests. She was also a first prize winner in the Beau Monde’s Royal Ascot contest.