Spotlight and Excerpt- You and Me Always by Jill Mansell 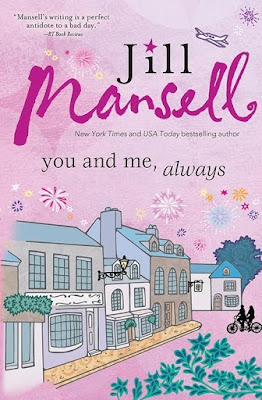 Nothing stays secret forever, least of all love…

On the morning of her twenty-fifth birthday, Lily Harper opens the very last letter written to her by her beloved mother, who died when she was eight. Learning about the first and only real love of her mom’s life is a revelation.

The same momentous day, Lily meets Eddie Tessler, an actor fleeing fame who could change her world in unimaginable ways. But her childhood friend Dan has his own reasons for not wanting Lily to get too carried away by Eddie’s attentions.

As secrets past and present begin to emerge, Lily’s not sure what—or who—to believe. But one thing is clear: in the beautiful Cotswold village of Stanton Langley, nothing will ever be the same again…

With over ten million copies sold, New York Times and USA Today bestselling author Jill Mansell writes irresistible, funny, poignant, and romantic tales for women in the tradition of Marian Keyes, Sophie Kinsella, and Jojo Moyes. She lives with her partner and their children in Bristol, England.

Patsy stood in the center of the road and watched as Derek energetically cycled off without her. She couldn’t quite believe he hadn’t noticed she’d gone.
Why did this kind of situation always seem to happen to her? Derek had sounded so nice in his emails. He’d given her no cause whatsoever to suspect he was a secret cycling fanatic with a deep and detailed knowledge of every single bike path in the UK and a passion for sharing all this information with her in a maximum--volume, never--ending monotone.
If she’d known, the entire relationship could have been nipped in the bud before it even had time to become a bud. Some women might not mind the idea of sailing through life on the back of a tandem, but Patsy definitely wasn’t one of them.
She sighed and brushed away the loose strands of hair that were sticking to her forehead. And now Dan and Lily were beckoning her toward them, no doubt finding her predicament hilarious. What she should have done, of course, was to tap Derek on the shoulder, politely explain that they might as well give up now, then shake hands, say good--bye, and wish him better luck next time.
That would have been the normal way, the dignified way to go about it.
Oh God, poor Derek. She really shouldn’t have done that to him.
Then again, poor her.

Email ThisBlogThis!Share to TwitterShare to FacebookShare to Pinterest
Labels: Jill Mansell, Spotlight, You and Me Always