**SPOTLIGHT, EXCERPT & GIVEAWAY** A Promise of Fire by Amanda Bouchet 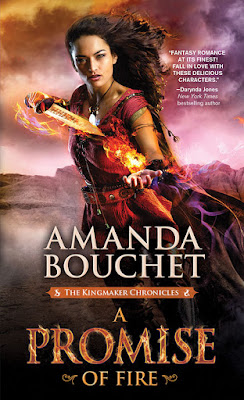 KINGDOMS WILL RISE AND FALL FOR HER…

BUT NOT IF SHE CAN HELP IT

Catalia "Cat" Fisa lives disguised as a soothsayer in a traveling circus. She is perfectly content avoiding the danger and destiny the Gods—and her homicidal mother—have saddled her with. That is, until Griffin, an ambitious warlord from the magic-deprived south, fixes her with his steely gaze and upsets her illusion of safety forever.

Griffin knows Cat is the Kingmaker, the woman who divines the truth through lies. He wants her as a powerful weapon for his newly conquered realm—until he realizes he wants her for much more than her magic. Cat fights him at every turn, but Griffin's fairness, loyalty, and smoldering advances make him increasingly hard to resist and leave her wondering if life really does have to be short, and lived alone.


Sourcebooks Casablanca is thrilled to announce that we are releasing our very first fantasy romance! Coming August 2016 from debut authorAmanda Bouchet is the un-put-downable A Promise of Fire, the first in the Kingmaker Chronicles series.

To celebrate, we’re giving you the first FIVE chapters to read FOR FREE!

To get you started, we’ve included the first few pages below.

I pluck at my crimson tunic, tenting the lightweight linen away from my sticky skin. The southern Sintan climate isn’t my worst nightmare, but it sometimes ranks pretty high, right along with the stifling layers of cosmetics masking my face, my leather pants, and my knee-high boots.

Heat and leather and heels don’t mix, but at least looking like a brigand means blending into the circus. Here, discreet only gets you noticed.

Craning my neck for a breath of fresh air, I navigate my way through the beehive of tables already set up for the circus fair. The performers on the center stage are the main attraction. The rest of us surround them, carving out places for ourselves amid the crowd. Tonight, hemmed in on all sides in an amphitheater lit by hundreds of torches and filled to capacity, I feel like a Cyclops is sitting on my chest—suffocated.

Damp curls cling to my neck. I peel them off and tuck them back into my braid, scanning the crowd as I walk. I recognize some of the regulars. Others I don’t know. My eyes trip over a man and get stuck. He’s looking at me, and it’s hard not to look back. He’s striking in a dark, magnetic way, his size, weapons, and bearing all telling me he’s a tribal warlord. His build is strong and masculine, his gait perfectly balanced and fluid. He walks with predatory confidence, unhurried, and yet there’s no mistaking his potential for swift, explosive violence. It’s not latent or hidden, just leashed.

Watchful, alert, he’s aware of everything in his vicinity. Especially me.

Our gazes collide, and something in me freezes. His eyes remind me of Poseidon’s wrath—stormy, gray,intense—the kind of eyes that draw you in, hold you there, and might not let you go.

Adrenaline surges through me, ratcheting up my pulse. My heart thumping, I blink and take in the rest of him. Intelligent brow. Strong jaw. Wide mouth. Hawkish nose. Black hair brushes a corded neck atop broad shoulders that have no doubt been swinging a sword since before he could walk. Body toned to perfection, skin darkened by a lifetime in the sun, he’s battle-chiseled and hard, the type of man who can cleave an enemy in two with little effort and even less consequence to his conscience.

He keeps staring at me, and a shiver prickles my spine. Is this man my enemy?

There’s no reason to think so, but I didn’t stay alive this long without the help of a healthy dose of paranoia.

Wary, I sit at my table, keeping an eye on him as he weaves a bold path through an array of potions, trinkets, and charms. He’s flanked by four similar men. Their coloring varies, but they all have the same sure look about them, although they pale in comparison to the warlord in both authority and allure. The man with the gray eyes is a born leader, and only an idiot would mistake him for anything else.

He stares for so long that I start to wonder if he can somehow bore through my layers of face paint and unmask me, but I’ve never seen him before, and he can’t possibly know the person underneath. I’m from the north of Fisa, where magic is might. He’s from the south of Sinta, where muscle and cunning decide who lives or dies. Our paths would never have crossed in the past, and warlords don’t usually frequent the circus.

I look away, hoping he’ll do the same. There are plenty of reasons a man stares at a woman. An exotic face and generous figure attract as much attention as a good mystery, if not more, and the warlord’s intense scrutiny feels more appreciative than alarming.

Ignoring the flush now creeping into my cheeks, I smooth the wrinkles from the coarse wool blanket covering my table and arrange my paraphernalia like usual. My glittering, gold-lettered sign advertisesCat the Magnificent—Soothsayer Extraordinaire, even though flashes of the future only come here and there, usually in dreams. Luckily, it only takes a few questions for truths to reveal themselves like flowers opening for the sun. I read people’s body language and glean who they are, what they want, and maybe even what they’re capable of. It’s about knowledge and illusion. I get a copper for it, which is more than a fair deal for me. I won’t peddle futures. I have an idea of my own, and that’s more than enough.

My leg starts a nervous bounce. Prophecies can be interpreted loosely, right?

The audience gasps, and I turn to see what’s happening on the stage. Vasili is throwing knives at his wife. She’s strapped to the flat side of a vertical, rotating wheel, and he’s blindfolded. He’s never hit her, but my heart still comes to a complete standstill every time they perform. Tonight is no exception, and I hold my breath, both riveted and terrified, until he runs out of knives.

The crowd is too caught up in the circus to take advantage of the fair, so I get up again and head to the performers’ gate to watch the end of the show and put some distance between the warlord and me. He’s still looking when he shouldn’t be.

The air coming through the gate is fresher, bringing with it the sound of Cerberus’s chuffing breaths and the scent of sweaty dog. He’s Hades’s pet, so I doubt the heat bothers him. I toss him a wave, and two of his three upper lips curl in a snarl of acknowledgment. One of these days, I’ll get all three, although in eight years I never have. I think his middle head just doesn’t like me.

Finished with his performance, Vasili unstraps his wife while Aetos launches himself onto the stage with a triple flip and lands in a fighter’s crouch that shakes the platform. The solid wood creaks under his colossal weight, and the rapt crowd murmurs in awe. Aetos straightens, pounds his chest, tears the horse pelt off his giant back, and catches fire. His roar shakes the amphitheater. No one can roar like Aetos. I’ve seen him perform hundreds of times, and I still get chills.

Seven and a half feet tall, muscle-bound, and tattooed blue from head to toe with Tarvan tribal swirls, he moves his hands in an impossibly fast dance, weaving fire until he’s encased in a sphere of living flame. He bursts through the crackling barrier with another roar. The explosion blasts the hair away from my face and dries out the inside of my nose. I’m forty feet away but feel like I’m in the furnaces of the Underworld. Fanning myself is useless. I’ll never get used to the southern heat, and with Aetos performing, it’s even worse.

The Sintan Hoi Polloi can barely contain themselves. It’s like doing tricks for children—everything enchants. For them, the circus is a whirlwind of power and impossible magical delights. Everywhere from the hard-packed dirt floor surrounding the fair tables and stage to the high, far reaches of the circular stone seating, people jump up and down, hooting and stomping their feet.

My feet tap along with the crowd’s, my eyes following Aetos around the stage. What a relief to be back in Sinta, even with all the dust and heat. I do whatever I can to stay on the west side of Thalyria. Our recent sojourn in the middle realm of Tarva made my lungs tight and my fingers itch for a knife. I’d probably start jumping at shadows if the circus ever went all the way east to Fisa. Just the thought of my home realm makes my sweat turn cold.

Sinta. Tarva. Fisa. West to east. Here to… Nothing I’m going to think about.

The audience whoops in approval of Aetos’s fiery moves. Hoi Polloi in the amphitheater are ecstatic—and not only with the show. They’ve been celebrating ever since a warlord from the tribal south hacked his way north to Castle Sinta to put his own sister on the throne. You’d think Dionysus had dumped a three-month supply of wine over the entire realm. Temples are overflowing with Sintans offering prayers of gratitude, their holy men overcome with gifts to help clothe and feed the poor. Statues of Athena, who is apparently well loved by the conquering warlord, have been spontaneously erected in towns and villages from here to the Ice Plains in Sinta’s north. Happiness and generosity abound, and I don’t even want to think about how many sheep have been slaughtered for celebratory feasts.

For the first time ever, the magicless majority is in charge, and Hoi Polloi are literally dancing in the streets—but only when they’re not throwing themselves in abject loyalty at the feet of the new royal family. Or so I’ve heard. I haven’t actually seen the new royals, but news spreads fast when there’s something to say. After the warlord and his southern army secured the Sintan throne last spring, his family took weeks just to move north. Not because they’re slow, but because of the sheer number of adoring people in their way.

It’s no secret the northern-born Magoi royals here in Sinta were despots, just like everywhere else in Thalyria. Hoi Polloi know they’re better off with one of their own in charge.

But royals without magic? My cynical snort is lost in the boisterousness of the crowd.It’ll never last.


About the author
Award-winning author Amanda Bouchetgrew up in New England and studied French at the undergraduate and graduate levels. She moved to Paris, France, in 2001. Her first novel,A Promise of Fire, won several Romance Writers of America chapter contests, including the Orange Rose Contest and the paranormal category of the prestigious Golden Pen.
Click here to learn more about A Promise of Fire by Amanda Bouchet.