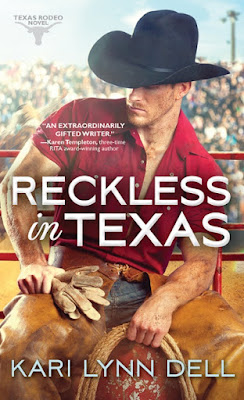 Violet Jacobs is fearless. At least, that’s what the cowboys she snatches from under the hooves of bucking horses think. Outside the ring, she’s got plenty of worries rattling her bones: her young son, her mess of a love life, and lately, her family’s struggling rodeo. When she takes business into her own hands and hires on a hotshot bullfighter, she expects to start a ruckus. She never expected Joe Cassidy. Rough and tumble, cocky and charming, Joe’s everything a superstar should be—and it doesn’t take a genius to figure out he’s way out of Violet’s league.

Joe came to Texas to escape a life spiraling out of control. He never planned on sticking around, and he certainly never expected to call this dry and dusty backwater home. But Violet is everything he never knew he was missing, and the deeper he’s pulled into her beautiful mess of a family, the more he realizes this fierce rodeo girl may be offering him the one thing he never could find on his own.


A Letter from the Author

There’s something about a rodeo. The scent of early morning dew and the quiet crunch of gravel under metal shoes. The first drowsy simmer of excitement wakened by the dull thud of hooves on rubber as horses hop into the trailer. One last check to be sure all the rope bags and bridles and the one certain saddle blanket are packed into the tack compartment. The life-giving aroma of coffee in travel mugs, and a half-hearted debate about whose turn it is to climb behind the wheel, and who drove last time, and yeah, honey, I know you hate those idiot Portland drivers. I’ve got that shift.

There’s something about a rodeo that takes you to places you would otherwise never venture. Tiny towns on dead end highways, with names like Weippe and Rosebud. Into the chaos of city traffic in Minneapolis and Seattle. Through endless miles of high desert to Winnemucca, and crawling up the side of Hell’s Canyon to Asotin.

There’s something about a rodeo. Bucking bulls and horses drowsing in the midday sun, tails twitching at the occasional fly. Voices and laughter echoing through a maze of pickups and trailers in the contestant parking area. How’d you do at Homedale yesterday? Great ride at Fort Pierre last weekend. Did you draw a good one today? Yeah, I got on Thunderfoot at High River. Better have your hammer cocked, he’ll throw some moves at you.

The whistle of ropes as cowboys pull out their gear and warm up their arms. The jingle of tack and the slap of leather, punctuated by an occasional whinny. Damp earth and diesel smoke as the tractor rumbles around the arena, preparing the ground, and the first, tempting wafts of grilled beef from the concession stand. And underneath it all, a slow-building tension.

There’s something about a rodeo. Old men in battered, sweat-stained cowboy hats and pearl snap shirts, clustered together in the stands to relive the good times, shaking their heads at how fast these boys are nowadays. Babies in strollers, and their older siblings scampering around in boots and spurs, swinging kid-sized ropes and dreaming dreams as big as the world.

We ask, Lord, that you be with us in the arena of life…

There’s something about a rodeo. The simmer turning to a buzz as your moment creeps closer. Muscles tighten, lungs constrict.Relax. Breathe. The concerted effort to clear the clutter from your brain and be here, now, inthis moment. This few seconds that are the culmination of all the hours of training and practice and travel. Hands that want to tremble from anticipation when you tighten cinches and test your loop. The creak of leather and the musky scent of horse sweat as you swing aboard. Reins that twitch in your hands, bottling up the equine nitro that churns beneath your saddle, eager for the instant of explosion.

Minutes drag, and then race, and then drag again.Relax. Breathe. Riding the wave of adrenaline to the razor-thin edge between ultimate effort and tipping over into a debilitating tangle of nerves.Focus. Clear. You’ve done this a thousand times. Shut down your mind, trust your body.

There’s something about a rodeo. That moment when it’s your name booming over the loudspeakers. You backing into the roping box, climbing down into the chute. A ton of muscle and adrenaline quivering beneath you, primed to launch. Ready, ready…

And then you nod your head.

There’s something about a rodeo. And I hope you’ll grab a copy ofReckless in Texas and come along for the pulse-pounding, heart-stopping ride.

Joe slid off his horse, face contorted with pain. He pressed his back against the nearest post and eased down, knees bent, hands clasped tight between his thighs, grinding out curses between clenched teeth. Violet dropped to a crouch between his feet, stomach churning at what she might find. Just a month earlier, she’d seen a team roper lose a thumb by catching it in his rope, and last year one of the tie-down ropers had crushed his wrist in a stray coil.

“Let me see.” She took hold of his forearms, trying to pull his hand out to where she could examine it.

“Yes.” She slid her hands down to his wrists, not feeling any gross deformities or blood, but he still had his gloves on. “Is it your thumb?”

“Stop being a baby.”

His right hand snapped up, whip-quick, and clamped on the back of her head, bringing them nose to nose, eye to eye. “It’s not my hand, Violet. It’s what’s underneath.”

Joe’s hand was cradling his crotch. That pop she’d heard? It was the knotted end of the rope whacking him where it counted. And her hand was right on top of his.

He bared his teeth. “Still wanna kiss it better?”

Mortification rolled over her, hot as molten lava. She tried to jerk away, but the force of Joe’s grip on her nape

tipped her off balance. She grabbed his shoulders and her not-inconsiderable weight knocked him sideways. They tumbled to the ground in a tangle of limbs. She scrambled to get her knees under her. One of them made contact with something solid. Joe yelped, twisting hard and fast, flipping Violet onto her back. She arched, bracing to fight him off.

Joe was sprawled on top of her, his body rigid. Air hissed in and out between his teeth and sweat beaded on his forehead. “Just…don’t…move,” he panted. “Honest to God, you knee me in the thigh again, I’m gonna puke right down the front of your shirt.”

Violet held her breath. If possible, she would’ve willed her heart to stop beating, in case thethud, thud, thud disturbed his stomach. Motherhood had done nothing to disable her very active gag reflex. As her head cleared, she sorted out what was where. Joe was draped over her, chest to chest, her kneecap flush against the inside of the thigh Dirt Eater had nailed. She carefully rotated her leg, removing the pressure.

“Thank you,” Joe breathed. “Just give me a minute to catch my air and I’ll get off of you.”

Her hands were still clamped on his shoulders, but she couldn’t find anyplace else to put them. The longer she stayed put, the more aware she became of all the hard, lovely muscle under his T-shirt. If it were Beni, she could rub his back to make him feel better. She imagined sliding her palm down the sleek curve of Joe’s spine. Imagined his reaction. Yeah. He would definitely misinterpret the gesture. Much like her body was beginning to misinterpret their current position, the lean length of him hot against her, his cheek pressed to her collarbone, his face buried in the curve of her neck. Each short puff of air was a hot stroke on her skin.

He huffed a laugh that tickled her ear. “If having a kid hurts as bad as gettin’ whacked on the pecker with a nylon rope, I need to buy my mother flowers.”

“More like a new car,” Violet said drily. “And I thought it was your thigh.”

“Uh-huh. I’m guessing this is why you’re a pickup man and not a paramedic.”

Degree by degree, the tension eased from his body, even as Violet wound up like a spring. Need coiled hot and low, and the urge to wiggle against him was almost intolerable.

“Up until then you were doing pretty good,” she said, by way of casual conversation. “I’ll have to tell Beni you can handle stock okay.”

“Gee, thanks.” She could hear the eye roll in his voice. He blew out a long, slow breath—then nuzzled his face into her hair and inhaled deeply. “You even smell good when you’ve been rolling in the dirt.”

She jerked her head away. “Do you always go around sniffing women like a damn stud horse?”

“Nah. If I were a stud horse, I’d do this.” He gave her a quick, light nip at the curve of her neck that electrified every nerve ending and shot a blue-white current straight to where his thigh was pressed between her legs.

She shoved at his shoulder. “Stop that!”

“Just wanted to see if you tasted good, too.” He pushed up onto his elbows, groaned, and eased sideways, an excruciating slide of body against body before he rolled clear and flopped onto his back, legs splayed. He lifted one hand in warning. “Stay back. I’ll be fine as long as you don’t help me anymore.”

No problem. Violet couldn’t move, paralyzed for a few breaths by the sudden, aching absence of his weight. Then she scrambled to her feet, slapping the dust from her butt and legs. “Take all the time you want, tough guy.”

His head snapped up. “You tackled me when I was already down.”

“I thought you were actually hurt.” She flipped a casual hand at him. “No, don’t get up. Katie and I can handle it.”

He made a noise like a pissed-off rattlesnake. She shook the dirt out of her hair, tugged her cap down low, and went to deal with the bulls before she lost her head and tackled him again.


About the author
Kari Lynn Dell is a ranch-raised Montana cowgirl who attended her first rodeo at two weeks old and has existed in a state of horse-induced poverty ever since. She lives on the Blackfeet Reservation in her parents' bunkhouse along with her husband, her son, and Max the Cowdog, with a tipi on her lawn, Glacier National Park on her doorstep and Canada within spitting distance. Her debut novel, The Long Ride Home, was published in 2015. She also writes a ranch and rodeo humor column for several regional newspapers and a national agricultural publication.