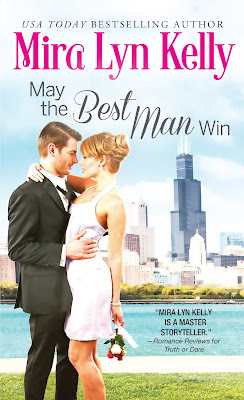 Each a Best Man at a wedding

One chance to get it right

Jase Foster can’t believe his bad luck. He’s been paired with the she-devil herself for his best friend’s wedding: Emily Klein of the miles-long legs and killer smile. She may be sin in a bridesmaid dress, but there’s no way he’s falling for her again.

They can barely stand each other, but given how many of their friends are getting married, they’ll just have to play nice—at least when they’re in company. Once they’re alone, more than just gloves come off as Jase and Emily discover their chemistry is combustible, and there may be something to this enemies to lovers thing after all…

On the upside, the prelude had already begun, and chances were good that Mozart’s Sonata in E-flat Major pumping through all those organ pipes would cover any sounds of distress emanating from St. A’s sacristy.

Jase Foster crouched in front of Dean Skolnic, groom du jour, and cursed. This had to stop happening.

“You think she’s gonna notice?” Dean asked, wincing as Jase pulled one strip of duct tape after another off the garbage bag of ice currently secured to Dean’s shoulder.

“The arm?” Jase clarified, because while he wasn’t an every-Sunday kind of guy, they were in a church so he couldn’t flat-out lie. “No, man. I really don’t.”

Lena would take one look at her husband-to-be’s swollen black eye, and she wouldn’t see anything else.

She might notice the greenish-gray pallor of Dean’s normally ruddy complexion, because coupled with the way he was gulping air like a goldfish, it didn’t bode well for his stomach or anyone within splatter distance.

The door opened behind them, and Father John plowed in, five foot six inches of bristling irritation and grizzled holiness. Scowling at the scene in front of him, he snapped his fingers and pointed at the guilty-looking crew of lesser attendants—mostly Dean’s cousins who’d driven in that morning—plastered to the back wall. “Crack the fucking window.”

Jase steeled himself against the laugh clawing to get free. Because, yeah, Father John had a mouth on him. Something Jase had discovered when he, Max, Brody, and Sean were muscling Dean out of the limo, barely clearing the door before the driver peeled off. The priest had stopped dead in the mostly empty back parking lot, taken one look at Dean, and let loose with enough four-letter words that even the guys—seasoned professionals in the expletive arena—had been coughing into their fists, studying the thick canopy of trees above and the new asphalt beneath their feet, basically looking anywhere but at the pint-size priest with a bear’s temper.

“How we doing, Father?” Jase asked, pulling the bag of ice free and stepping out of blast radius. “Need any help?”

More grumbling as the priest elbowed one of the groomsmen out of his way and opened the window himself. “Seems you’ve done enough already.”

Probably. But Jase was chalking this morning up as a learning moment. No matter how bad the groom’s nerves, a quick game of hoops on the way to the church was not the answer, especially when evening out the teams required bringing the limo driver into the mix.

Cutting a look over at Max, Jase pushed to his feet. “Let’s get his jacket on.”

Max Brandt was working his cop stance with his legs apart, his arms crossed over his chest, and a don’t-fuck-with-me scowl firmly in place. He nodded down at Dean. “Get serious. He’s gonna blow. We don’t put it on him until he does.”

Hell. Jase glanced around the tight confines of the sacristy to the cabinets stocked with candles, chalices, napkins, and the rest of the holy hardware, and he mentally amended Fuck with the requisite apologies applied.

Jase wanted to think Dean could pull it together, but when it came to hurling, Max could call it from a hundred yards away. Even before the Chicago police force honed his powers of observation to a sharpened critical edge, the guy had had a hinky instinct about when to clear a path. That and about women too. Both handy skill sets to have.

Grabbing a plastic trash bin from next to the hanging rack of choir robes, Jase shoved it into Dean’s good arm.

“You heard him, Dean. Make it happen, and we’ll get you out there.”

That was a promise, because unless one of his grooms had a definitive change of heart about marrying the woman waiting down the aisle, no-shows didn’t happen on Jase’s watch.

The door opened again, and Brody O’Donnel stepped inside. He wasn’t as tall as Jase or as menacing as Max, but the guy had presence. He was solidly built with a broad chest and a wild head of russet waves that fell well past his ears, which he’d only half bothered to tame for the morning’s nuptials.

Whistling out a long breath, he eyeballed Dean, who was doing his best to manage the task assigned to him. Then nodding around the room, Brody grinned. “Father. Guys.”

Father John looked up and broke into a beaming smile.

“Brody,” he boomed like the guy was his prodigal son returned, even though the two had only met the night before. Then shaking his head with a warm laugh, he declined when Brody pulled a flask from the inner pocket of his single-button tux jacket and, shameless grin going straight up, held it out in offering.

“Aw, come on, Father John. It’s the good stuff,” he ribbed before passing it to one of the braver cousins.

Brody could always be counted on for two things: his uncanny ability to make friends with just about anyone and his propensity for always having a flask of “the good stuff” on hand for emergencies. Which made sense, considering he owned Belfast, one of Lakeview’s most popular bars. Booze was, in fact, his thing.

“Brod, so what’re we looking at?” Jase asked, knowing they had to be running out of time.

“The girls are about ready to go. Sean’s smooth-talking the Skolnics, and I’ve got the safety pins, but…uhh…”

Jase knew that drawn-out qualifier. Whatever Brody had to say, Jase was sure he wasn’t going to like it. “What?”

“Maid of honor had the pins and wouldn’t give ’em up if I didn’t tell her what was going on.”

Emily Klein. Fucking fantastic. Because after managing to avoid her throughout the entire engagement, now with everything else that morning, Jase was going to have to deal with her getting up in his grill?

“Nah, I talked her down pretty good, so—”

And that was as far as Brody got before the sacristy door swung open again and that old familiar tension knuckled down Jase’s spine. He took her in with one sweeping glance and then—just to piss her off—went back for a second, slower pass. She should have looked like Natasha Fatale from those old Rocky and Bullwinkle cartoons. She had the height all right, but instead of the severe black hair, wickedly arched brows, bombshell body, and calculating scowl, Emily was every kind of soft. Soft strawberry-blond hair spiraling in loose curls over her shoulders. Big, soft-brown eyes. And a soft, shy smile that hid her poison-dart tongue. Even her body, tall and athletically lean, had a softness to its modest curves—curves that had distracted the hell out of Jase in high school but that he’d become immune to in the passing years.

Since he’d finally seen through her soft snow job to the cold, hard ice queen beneath.

“Jackass,” she greeted, with a soft smile just for him.

USA Today bestselling author Mira Lyn Kelly grew up in the Chicago area and earned her degree in fine arts from Loyola University. She met the love of her life while studying abroad in Rome, Italy, only to discover he’d been living right around the corner from her. They live in rural Minnesota.