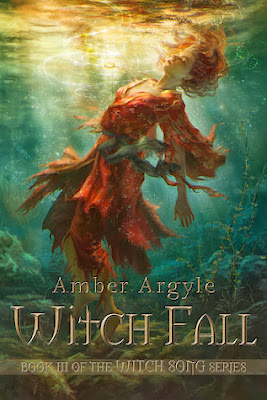 Supreme in their dominion over seasons, storms, and sea, the Witches have forgotten the unmatched destructiveness of mankind. And among the weapons men seek are the magical songs of the Witches.

Lilette is one of the few who see the decadence and decay weakening the Witches. As an outsider amid her own kind, can she help them survive the coming war?


Excerpt
Han looked at her, his eyes as dark and depthless as the deepest part of the ocean. His gaze shifted to her mouth and she could have sworn she felt the pressure of his gaze on her lips. She moved forward a fraction, until there was nothing between them but sunlight. Then there was nothing between them at all. His lips were on hers, not claiming, not possessing, simply wanting. Needing.
Lilette had never known how full of need he was. How dark and empty the spaces in his soul must be. He drank her in like she was light and hope and he’d been a starving man all his life.
For Lilette, it was like his touch let her shine. Like she’d been shattered into a thousand specks of light and he brought her together—made her whole.
With a shudder that shook to his core, Han pulled away from her. He rested his forehead against hers, his breath ragged and his lips red. “Lilette.”
She closed her eyes as he said her name. Said it like he was cupping a bird in his hands and he’d set it free. She inhaled the breath that had carried her name. “Han.”
“It’s like no matter how hard I try, you’re all I can see.”
She held her hands together to keep them from trembling and betraying her. “Where does that leave us?”
“I don’t know.” Han closed his eyes and breathed her in. “You’re leaving for Haven. I’m going to stay here as an ambassador for Harshen.”
She nodded. “I’m glad.” She trusted no one else with this.
Han hesitated, and then kissed her briefly. “Be well, little dragon.” He turned and walked walking away.
Lilette watching him, waiting for him to move out of sight before she allowed her legs to go soft. Let herself sink into the loam. She didn’t cry. She just waited for the aching to fade enough to get to her feet and keep moving.

Amber Argyle is the author of Witch Song and Fairy Queen trilogies. She grew up with three brothers on a cattle ranch in the Rocky Mountains. She spent hours riding horses, roaming the mountains, and playing in her family’s creepy barn. This environment fueled her imagination for writing high fantasy. She has worked as a short order cook, janitor, and staff member in a mental institution. All of which has given her great insight into the human condition and has made for some unique characters. She received her bachelor’s degree in English and Physical Education from Utah State University. She currently resides in Utah with her husband and three small children.
Author links
Website | Goodreads | Facebook | Twitter


BOOK 1 - WITCH SONG IS FREE RIGHT NOW
SO GO SNAG YOURSELF A COPY!!!