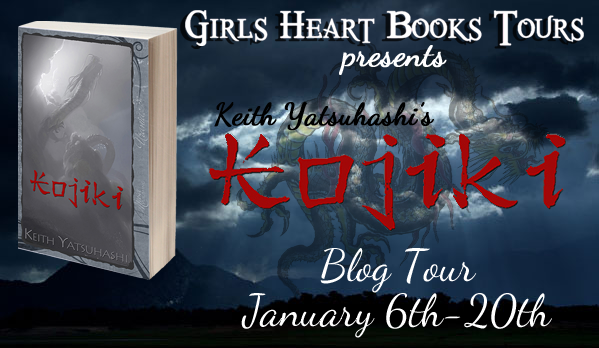 Thanks for joining us on the next stop of the Kojiki Blog Tour!
We hope you have enjoyed it so far and enjoy your stop here. 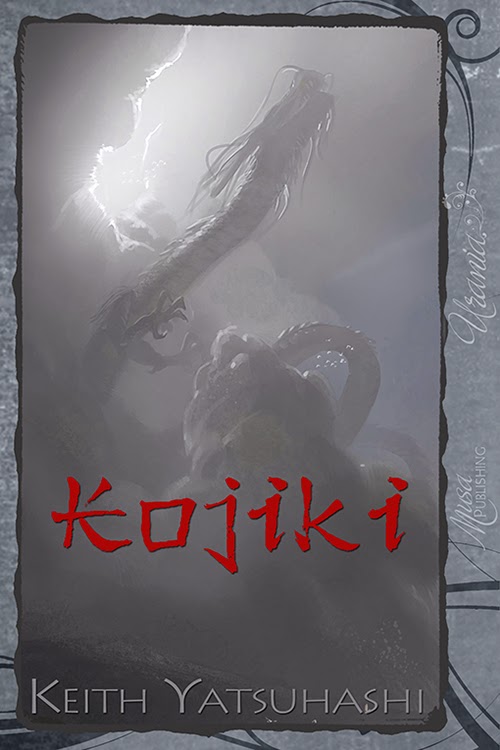 Book Blurb
When eighteen-year-old Keiko Yamada’s father dies unexpectedly, he leaves behind a one way ticket to Japan, an unintelligible death poem about powerful Japanese spirits and their gigantic, beast-like Guardians, and the cryptic words: “Go to Japan in my place. Find the Gate. My camera will show you the way.”

Alone and afraid, Keiko travels to Tokyo, determined to fulfill her father’s dying wish. There, beneath glittering neon signs, her father’s death poem comes to life. Ancient spirits spring from the shadows. Chaos envelops the city, and as Keiko flees its burning streets, her guide, the beautiful Yui Akiko, makes a stunning confession--that she, Yui, is one of a handful of spirits left behind to defend the world against the most powerful among them: a once noble spirit now insane.

The Earth itself is at stake, and as Keiko fights to save it, strange, dormant abilities stir within her. She suspects they are vital to her world’s survival, but to summon them, she must first unlock the mysteries within herself and a past shrouded in mystery.

Excerpt
Yui knelt on the tatami mats of her father’s study, Matsuda’s staff cradled in her hands. She came back to the room shortly after Vissyus reappeared, watching as long as she could before emotion overcame her. Tears still spilled from her eyes. Tokyo was as much her home as this castle. It was part of her, and now it burned. Why did her father have to take so much from its people in order to save them? Maybe surviving would be enough for them.

It wasn’t for her.

Her Searching transported her to the heart of the city. Shinjuku’s proud skyscrapers were a pile of ash, Tokyo Tower now little more than twisted metal. She ghosted down Chuo Dori. Ginza Station had disappeared beneath a toppled building. The intersection where she’d lost Keiko was a tangle of melted wire, soot, and shattered neon tubes. The acrid scent of charred wood and chemical fires blended with the coppery tang of blood. Their monks did their best, but she never expected them to save everyone. Her father tried to hide that from her, and now she understood why.

She felt their Spirits— lifetimes and memories forever lost to the world. A battle wasn’t some game; she understood that now. The ruined city was proof enough for her. So much destruction with so little effort. What would happen when Vissyus unleashed his full power?

Shivering, she hugged Matsuda’s staff and lowered her head. Where was his strength when she needed it? 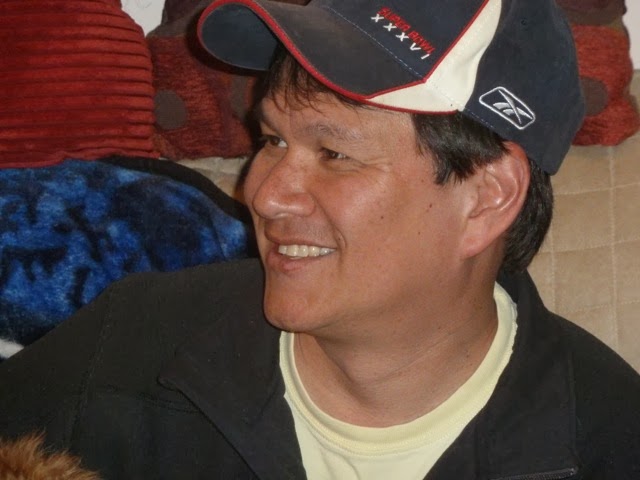 Keith Yatsuhashi was born in 1965 in Boston, MA. He graduated from Northeastern University in 1989 and is currently the Director of the U.S. Department of Commerce Export Assistance Center in Providence, Rhode Island.
Keith was a competitive figure skater for ten years, winning the U.S. National Junior Dance Championships in 1984, a bronze medal in the 1983 World Junior Figure Skating Championships, and a silver medal in 1984.

In addition to his love of writing, Keith enjoys many hobbies such as golf, reading, and playing football and hockey with his sons. Keith currently lives in Norfolk, MA with his wife, Kathleen and three children—Caitlin, Jeffrey, and Justin.
GOODREADS
TWITTER
FACEBOOK
Giveaway

a Rafflecopter giveaway
Posted by Renee Booth at 4:00 AM