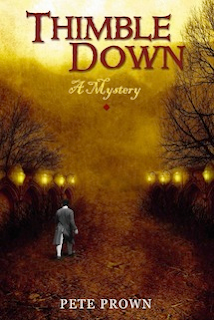 Thimble Down is a country village where death and malice lurk the quiet lanes.When the vile, drunken Bing Rumple acquires a gem-laden treasure, violence begins to follow him everywhere. Where did Bing find such a precious jewel, and worse, is someone willing to kill to possess it? In this fast-paced adventure, the village bookmaster, Mr. Dorro, and his young companions Wyll Underfoot and Cheeryup Tunbridge are in a desperate race to find the answer—before death comes to Thimble Down.

Thimble Down is the first book in the “Chronicles of Dorro” young adult mystery series, which follows Dorro, Wyll, and Cheeryup, on their exciting, but dangerous, mystery adventures.

Amazon reviews:
“A fun read. Choose your favorite chair and settle down for a lighthearted, fast-paced tale of thievery and intrigue in the faraway and long ago village of Thimble Down. You’ll meet some unlikely heroes among the town’s inhabitants, the “Halflings,” who love a good mystery almost–but not quite–as much as they enjoy their creature comforts. This book is part mystery and part fantasy with a tasty smattering of cooking, gardening, and fishing tips thrown in. Enjoy!”

“Perfect for the tween in your life. Ordered this book for my twin, 12 y/o nephews for Christmas and they both devoured it. Can’t wait for the next one!”
Excerpt

The next morning, Bing Rumple was in full stride. He’d been walking in and out of shops, a chop house, pony stables, and many of the other burrows and houses that composed the center of Thimble Down, bragging about his exploits in the east. With his brother Farroot and Bill Thistle following him like a pair of leering weasels, Bing was enjoying his moment in the sun.“How do you kill a ferocious goblin?” A youngling had just asked him this very question, and now he was preparing a grandly entertaining response. “Why, you can do it many ways, my boy-o,” he said in a tough voice, but trying to stifle a grin. “You can stick him in the throat with an arrow at fifty paces, or sneak up from behind and garrote the bugger with a sturdy piece of rope. Me, I generally just cut ‘em to pieces with this elvish saber. Look!” he said, drawing the glimmering blade out of his scabbard, “you can even see bits of dried, black goblin blood, and burnt flesh in the crevices.” At this, the Halfling children screamed with a mix of fright and glee and ran off to tell their horrified mothers. Bing and his pals roared with laughter.As he expected, most people in Thimble Down had never even seen a goblin or troll up close. “What do they look like? Do they have bloody fangs?” asked young Tom Talbo, quivering with delight. Bing seemed to think for a moment before replying, “Oh course they do, young sir. And they have large bulbous eyes, thick grey-green or black skin covered with festering sores, long muscled arms, and meaty hands with claws on the end. They are fearsome to be sure, and if you get too close, they can shred yer intestines in a mere flash.” Bing embellished his tale each time someone asked. He’d never been a celebrity before, and he rather liked it.“The worst of it was when me ‘n’ the lads were trapped with an elfin hunting party, pinned down by about a hundred and fifty goblins that outnumbered us mightily,” he rambled on. “We were on the top of a small bluff with goblins and trolls all around us. The elves fought valiantly, but we saved the day. Let me tell you the whole story.” “Ya see, goblins hate fire, and by a stroke of fortune, the top of the bluff was covered with dry, dead brambles and bushes. So I braved a rain of goblin arrows and ran over to the elf chieftain. I said, ‘Toldir’—that was his name—‘go ask yer men to gather all the brush and big rocks possible, and arrange them on rim,’ I says. Of course, Toldir got pretty steamed at me for calling his warriors Men, because of course, elves ain’t Men and Men ain’t elves, if you reckon my meaning. But in the heat o’ battle, these things happen. Anyway, the elves did as I asked, and soon the entire edge of our bluff was ringed with brush and big boulders. I’ll hand it to them elves—they are strong and can move quick-like, especially in a pinch.”“As a further stroke of luck, the elfin hunters had leatherskin bags filled with deer and musk oil from their recent kills, which we used to drench the brush. At Toldir’s command, the oil was lit afire, creating a massive inferno around the perimeter. I gave a shout of ‘Heave-ho!’ and we used sticks and logs to push the big rocks and flaming brush over the lip and down onto the enemy, who were stricken with terror. Those goblins that weren’t killed outright by the boulders and stones were hit with the flaming brambles and verily burst into flames. And any demons that escaped this hell were soundly stuck with deadly elvish arrows or, might I modestly say, by the edge of my sword as we charged down the hill to destroy the enemy. With the goblins either dead or in complete disarray, our troop was able to escape and rejoin the larger elf forces to fight another day.”

“Huzzah! Hurrah for Bing!” applauded his audience. Bing, Farroot, and Bill tossed handfuls of pennies into the crowd to curry their favor even more, driving the children mad with joy. Still, some of the older Halflings at the edge of the crowd couldn’t put the image of the sniveling Bing Rumple of yester-year out of their minds. “How could that miserable excuse for a Halfling be such a hero?” they thought. But in general, the village folk were greatly entertained, and this was a great boon to local merchants who hadn’t seen crowds this big since the harvest festival of the previous year. Up and down the hard-packed dirt lanes in Thimble Down, sellers were bringing their wares into the open air, especially pies, cakes, and any variety of dried, candied meats on a stick, which only cost a penny or two and were gobbled down rapturously.Many in the crowd were also ogling the gem-encrusted brooch pinned on Bing’s left breast. Indeed, more than a few secretly began to covet it. Among them was one Halfling who decided—at that very moment—to steal it.

Even if it meant someone had to die.

Thimble Down is available on
AMAZON
iBooks
B&N

Pete Prown is a noted American writer of Young Adult fantasy books, as well as a magazine and book editor, and journalist. He’s written both fiction and non-fiction books, including THIMBLE DOWN and a series of instructional titles about guitars.Also a talented musician and recording artist, his Guitar Garden music is available on CDBaby.com and iTunes. For more information, go to http://peteprown.com/