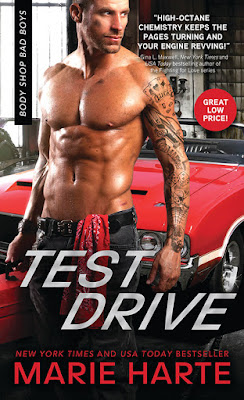 A smokin’ hot new series from Marie Harte featuring tough-guy mechanics and the women who jump-start their hearts.

GET TO KNOW THE BODY SHOP BAD BOYS
Johnny, Foley, Sam, and Lou are the rough and tumble mechanics of Webster’s Garage. These reformed bad boys are used to living fast, but it’s the women in their lives who take them from zero to sixty in a heartbeat.

Johnny Devlin’s a charmer with a checkered past. He’s had his eye on scorching-hot bartender Lara Valley for ages, but she’s rejected him more than once. That doesn’t mean he won’t come to her aid when some dirtbag mauls her. When she asks him on a date as a no-strings-attached thank you, he can’t say no. And then he’s saying nothing but hell, yes.

Still pondering how to get to the endgame he wanted with Lara, he nearly jumped when she appeared out of the dim hallway to join him by the couch. With only the TV to illuminate the darkened space, he saw her in the flicker of cartoon sea life.

His pulse racing, he swore. “Shit. You scared me.”

“I walk softly. Always have.” She smirked at him and grabbed the TV remote. “No more cartoons, please.” She changed the channel to a police procedural, then sat next to him.

“So. The girls good? Should I turn down the TV?”

“It’s okay. I closed the door to the bedroom. The girls are fine. I swear Amelia’s eyes closed before I hit the light, and Kay was yawning so hard I’m surprised she didn’t crack her jaw. They’re pretty tuckered out. It’s not every day they get the amazing Johnny Devlin as an esteemed guest.”

He smiled. “You’re not mad I stuck around?”

“Are you kidding?” She grabbed his hand and squeezed. “You were so good with them tonight. Thanks.” She held him tight, and he loved the feeling of her hand in his. Just touching her made his entire world right. “It’s good for them to see that not all men—who aren’t Grandpa—are assholes.”

She sighed. “I know. But it’s true. So many of my sister’s bad choices have fallen on the girls. Oh, nothing terrible. Nothing abusive,” she said to forestall his next question. “It’s just, they’ve never seen a man and woman in love. My parents are an example, I guess, but they’re so busy all the time. And well, they’re older. It’s not the same as seeing your own mom and dad together, loving and laughing. Not that that’s us or anything,” she added quickly, “but you get what I’m saying.”

“I do.” He pulled her into his side and tucked an arm around her shoulders. Not smart, because a wave of her subtle, floral perfume went straight to his head…and his dick. He prayed she wouldn’t notice. “You’re a great example for the girls.”

“Of a single woman working her ass off. Just like my parents, except I’m not married.” She sighed. “At least I can help my sister out. She’s a moron most days—and I mean that in a loving way.”

“But she’s trying to do right. She’s working with my mom at the diner. Typically, for Kristin, working means finding a man to support her, so doing for herself this time is a step up.”

“Hard to believe you’re related. Between school and Ray’s, you’re pretty busy. And you’ve been working there for four or five years, right?” He could still remember the first time he’d seen her. He’d sucked in a breath and felt everything just stop.

“Almost five, yeah.” She snuggled into him, and he had to suppress a groan. “Before Ray’s, I was working just to pay the bills. I didn’t want to dive into a career or anything right out of high school. I waitressed for a bit, worked retail. But minimum wage gets real old real fast.”

“You’re a mechanic. You get more than that an hour, don’t you?”

“Actually, I get twenty percent of labor costs. So you figure with what Liam and Del are undercharging the folks of greater Seattle, I’m way underpaid for my skills.”

They shared a laugh. He felt warm all over, content in a way that was both foreign and more than welcome.

“You do have talent, I’ll admit.” She moved even closer to him, so her breasts pushed into the side of his chest.

He had a hard time not moving to cup her soft flesh. Instead, he clutched her shoulder and ordered himself to be good. “Um, Lara?”

“You beat me at all the games we played. I owe you three kisses.”

“You do.” He sounded hoarse, so he cleared his throat. “But keep it clean, woman. Remember, this is a no-sex date.”

“Why no sex? Not that I’m offering, just curious.”

Bummer. “Because we’re getting to know each other without complications.” And did he feel like a first-class jackass suggesting they abstain. But it felt right.

“Sex is a complication?”

She slid an arm around his belly, hugging him, and he tensed under her, unable to help it.

“Kind of like drinking, hmm?” She moved her hand from his upper belly down his abdomen, and his body hardened into solid rock.

“What are you doing?” His brain fogged over as her hand inched nearer his cock.

“I liked them too,” came out as a growl.

“I have,” she murmured. “They agree. You can be a first-class jerk.”

“But you’re also a terrific guy with commitment issues. Thing is, I’m not trying to scare you. I just want to pay back my debt.”

Her clever fingers had found bare skin under his shirt, and she was scratching her nails up his belly, lightly enough to not hurt, but hard enough to be felt. She might as well have gripped him around the shaft and stroked. He loved his belly touched. A happy zone she’d not-so-innocently wandered into.

He couldn’t think with her rubbing his stomach. Especially because she seemed to get a perverse enjoyment out of scratching down to the hem of his jeans, toying with the button of his fly before dragging toward his navel again. Back and forth. Slower each time.

His erection pushed against his restrictive clothing, and he ached.

“So can I ask you a question?”

“You can have my car if you keep touching me like that,” he rasped.

He didn’t have to see her smile to know it was there.

“Do you practice safe sex?”

His cock fucking jumped. “What kind of question is that?”

“One I want answered.”

Those damn nails of hers veered to the waist of his jeans and lingered. He fought the urge to buck toward her with a cock needing attention. “Of course I use protection. I’m not stupid.”

“So does that mean you always use condoms? Or that you’re just good at pulling out before you come?”

Shit, shit, shit. She’d said come. Condom. She was asking about sex. Why did he think fucking her would not be in his best interests again? Something about rules and being memorable and wanting her to view him as more than a—

“Lara,” he garbled on a strangled whisper.

The vixen had unsnapped his jeans and parted his fly. She ran her hand over his obvious hard-on through his boxer-briefs, no doubt noticing the huge and growing wet spot.


Caffeine addict, boy referee, and romance aficionado, New York Times and USA Today bestselling author MARIE HARTE is a confessed bibliophile and devotee of action movies. Whether hiking or biking around town, or hanging at the local tea shop, she’s constantly plotting to give everyone a happily ever after. She lives in in Central Oregon.