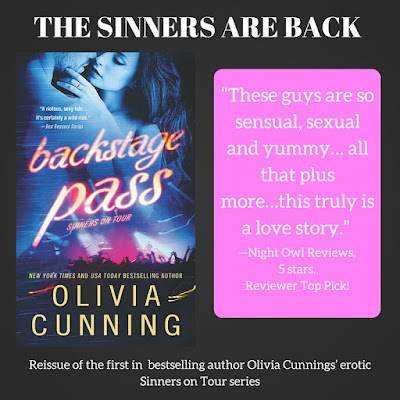 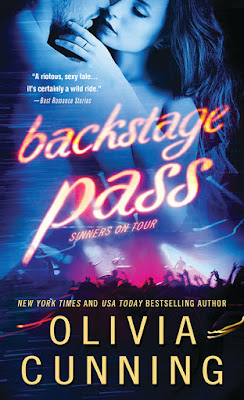 It’s been months since Brian Sinclair, lead guitarist for the famous rock band, The Sinners, composed anything. Unable to write the music that once flowed so naturally, Brian is lost without his musical mo-jo. But when sexy psychology professor Myrna Evans comes on tour to study groupie mentality, Brian may have found the spark he needs to re-ignite his musical genius. When lust turns to love, will Brian be able to convince Myrna that what they have is more than just a fling, and that now that he’s found his heart’s muse, he doesn’t want to live without her?


The crowd chanted, “Sinners, Sinners, Sinners,” for several minutes until the stadium lights came up. Myrna made a beeline to the backstage area. She spotted Brian going through the door behind the stage area that led to the dressing rooms. She flashed her backstage pass at a security guard and dashed after him.

He paused and turned in her direction. His smile, meant only for her, dazzled. She ran to him and wrapped him in an enthusiastic embrace. Her ears were numb from the loud music, but every other sense was heightened. The scent of his sweat made her tremble.

“You are amazing,” she sputtered.

He popped the earplugs out of his ears. “Don’t get all fan girl on me now.”

He wrapped an arm around her shoulders and walked her past the dressing room. As they passed, Myrna caught a glimpse of Sed, minus his shirt, surrounded by several girls.

“Where are we going?” Myrna asked.

“Trust me, you don’t want to go anywhere near Sed for a while. He’s in one of his moods. We’re going to the bus. Is that okay?”

She nodded. If he asked her to walk on hot coals, she would have eagerly complied. And why was that? She didn’t understand her own psychology at the moment.

He kissed her temple. “Did you like your solo?”

“How could I not? All I could think about was you making love to me when you wrote it.”

He chuckled. “I was thinking the same thing.”

“What else would I be thinking about?”

Her heart warmed as he squeezed her closer. They exited the building to a crowd milling outside the tour buses. The fans cheered when they recognized Brian, but the security guards kept them at bay until he could get Myrna safely up the steps and on the tour bus.

Her body thrummed, pumped full of adrenaline. She didn’t know why he needed to lie down. Unless…

“Yeah, I think you should lie down. Can I join you?”

“What do you think?” He looked down at her. “I’m getting sweat all over your dry-clean-only suit.”

He grinned. “Seeing me on stage really worked you up, didn’t it?”

“What do you think?”

She unfastened the buttons of her suit jacket and shrugged it off her shoulders. She tossed it on a random pile of jeans and black clothes before working on the small buttons of her silver, satin blouse.

Brian took her hand. “Come on. No telling when a roadie or Eric will show up.”

He led her to the back of the bus and through a door at the end of a narrow passage. They entered a small bedroom, its space dominated by a queen-sized bed.

“I’m not sure how clean the sheets are,” he murmured, helping her with her buttons now. “We’re slobs.”

“Wonderful. All of you.”

He paused, looking into her eyes in the dim interior of the room. The only light came from the streetlamps outside, filtering through the metal blinds. “Oh God, you aren’t lusting after Sed now, are you?” he asked. “I lose more women that way. They see him on stage and—”

She covered his lips with her fingers. “I’m lusting after you, Master Sinclair.”

“Don’t call me that here,” he said against her fingers.

“Brian.” She replaced her fingers with her lips, kissing him hungrily.

Her shirt fluttered to the floor. His fingers moved to the fastening of her skirt. He unzipped it and it dropped to the floor around her feet. He glanced down her body with a sexy smile on his lips. “I’m glad you decided I was worthy to see what was under that suit. Very nice.” Collapsing face down on the bed, he belly-crawled to the pillows and sighed in exhaustion. “I need a nap.”

She climbed up on the bed with him and straddled his body. She tugged his shirt off and sat back on his thighs, massaging his shoulders and back.

Brian sighed contentedly. “Exactly what I need, Myr. Thank you.”

She leaned forward to kiss the skin along his shoulders, her tongue darting out to collect the salt of his sweat.

“I can use some of that, too,” he murmured drowsily.

“Do you want me to leave you alone? I can tell you’re tired.”

“No, I like your company. This is nice. I don’t have the energy to devour you. You’re probably disappointed in me.”

“Never.” She took his hand in hers and massaged the base of his fingers and his palm.

She lowered her head to kiss his fingers. “These are magical.”

“We both know there’s only one magical body part in this bed. I think the fans liked your solo, Myr.”

She smiled. She knew she didn’t deserve any credit. “You’re sweet.”

He slept. So much for an hour of amazing sex before they had to go their separate ways. Myrna stretched out beside him, her hand tracing lazy paths up and down his back. Was she really here? This had undoubtedly been the most amazing day of her life. And even if she never saw this remarkable man again, she’d never forget him.

Raised on hard rock music, award-winning author Olivia Cunning has been known to travel over a thousand miles to see a favorite band in concert. She lives in Quincy, Illinois, where she enjoys sitting on the beach with her feet in the surf and penning naughty books about rock stars.