Today is the release day for Rissa Brahm’s exotic Tempting Isabel! I am so excited to share this sexy new romance with you. Be sure to check out the excerpt Rissa is sharing with us and enter her giveaway!

Wedding planner Isabel Ruiz is cursed. Her hometown of Puerto Vallarta, Mexico agrees, considering her tragic track record. Alone and loveless, she creates fairy-tale weddings for others. Her only distraction? The occasional anonymous fling. So to avoid further tragedy, her rule, one–night–only, is never broken…

Self-made millionaire Zack James is in town for his brother’s wedding, when a sudden spell of depression hits. Maybe burned out by his fast and luxurious lifestyle? Not even his two female companions hold any interest.

That is, until he meets Isabel.

She humbles and captivates him, reigniting his thirst for life. With her, Zack feels more alive than ever. To his delight—and her dismay—they share a deep bond, a sensual connection, and one mind-bending night.

Zack must have her – to complete him. And Isabel must escape him – to save him.

Their game of catch and chase leads to lust-turned-love. For Isabel, it's fate’s cruelest joke. But Zack won’t quit, positive he’s the cure to her curse. Can he convince her to risk everything with him? Or will it all go south…in paradise.

Get Your Copy Today:

She let a smile lift her face. God, a smile so sweet it was sensual. He got a chest pain, a good pain, from that smile. Zack smiled back at her. Just staring and smiling, until her smile took on a more questioning look. Her gorgeous head tilted. Maybe unsure of what else to say? Because he sure as hell was.

Another silent beat went by until she noticed her purse on the ground. Zack felt panic shoot up his spine. Shit. She was about to leave his vicinity, his world. Damn it, say something…anything, asshole.

But then she bent over for the purse. Her firm yet gloriously voluptuous figure, hugged by that professional little skirt, just right in his face—God, he hated himself. He felt like a fiend, a dirty rotten monster for wanting her the way he did, imagining that ass pounding against his bare thighs. He was disgusted with himself for having such a primal desire for such an unknowingly exquisite being.

He composed himself as she stood up, and before she turned around, a small coffee-colored blotch on her back caught his eye. A tiny birthmark peeked out from her low-backed top in the shape of a puzzle piece, situated on a slight angle. It just floated there, lost-like. He kept his eyes on it until she pivoted around on her uneven heels to face him. He swallowed and cleared his throat. She smirked then nodded one last thanks to him and his awkward ass, and then left him standing there—his pride in the fetal position at his feet.

And Jesus, no hesitation, no glance back over her shoulder, just…nothing. Was she playing hard to get? No. She seemed too self-assured to play that game, and she didn’t have the attitude, either. She had a kindness in her eyes, a stoic sweetness. Games just didn’t seem her style.

Maybe married? But he hadn’t seen a ring. He would have noticed a ring.

No, it was all so much worse. He didn’t exist for her, just not on her radar, or in her very recent past, or even on her planet. She hadn’t been rude or snotty in the slightest, just wholly uninterested.

An earthquake just shook his world to a standstill. A woman, an angel, rather, just limped away from Zachary James in her one high heel without a qualm, without a care, without giving him a first, let alone a second, thought.

Contemporary romance author Rissa Brahm grew up in New York and has since lived in all four corners of the United States, and beyond. The beautiful paradise of Puerto Vallarta, Mexico—the core setting of her soul-deep & sensual debut series, Paradise South—is Rissa’s most recent and beloved home.

When not chained-by-choice to her MacBook, she is embarking on outdoor adventures with her husband and little girl, eating amazing Indian food with something chocolate for dessert; reading good, hot scorchers in bed; biking, long walks, and yoga; zoning out to killer music from across the decades and the globe; and getting lost only to discover a new exciting route home again.

Tempting Isabel, Book 1 of the Paradise South series, releases May 24, 2016, followed by Taking Jana, on June 14th and Catching Preeya on July 8th. To learn more about Rissa and her next romances of the series, visit her website or shout out to her on Facebook or Twitter!​ 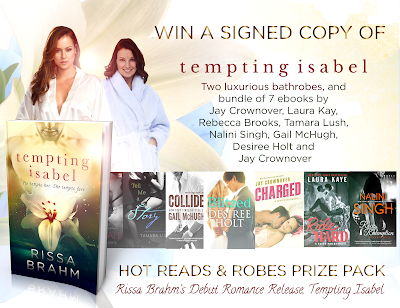