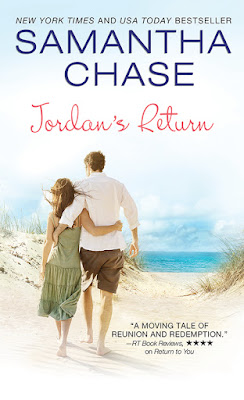 WILL ONE SUMMER TOGETHER
All Jordan Manning wants is a quiet summer on the Virginia coast with her sons to recover from a near-fatal accident and an abusive relationship. Her plans to find a new direction for her future are turned upside down when she runs into the first man who ever broke her heart…and he’s determined to win it back.

BE ENOUGH TO HEAL OLD WOUNDS?
Rob Tyler thought he’d moved on, but when fate drops a second chance with his first love right in his path, his feelings rush back stronger than ever. Rob is determined to give Jordan the future they should have had years ago, but making up for past mistakes isn’t easy…


The morning came way too soon. The boys were bouncing around her bed and Jordan was sure it couldn’t possibly be the sun she saw peeking from behind the window shades. It seemed she had just fallen asleep, and now here they were.


“C’mon! We’re hungry!” Jake said as he bounced on the king-size mattress. “Can we make pancakes?”


Jordan shook her head to get her bearings and looked at the clock. “Six forty-five!” she scolded them. “Do you wake me up this early at home?”


The boys seemed not to hear her.


“Can we, Mom?” Jake asked again with boundless energy.


“Can we what, baby?” she asked with confusion, pushing her chestnut hair away from her face.


“Pancakes,” Joseph answered. “He wants pancakes. I told him no but he didn’t believe me.” He stuck his tongue out at his little brother, who in turn mimicked the action.


“Sorry. No pancakes today, guys,” she said around a yawn. “We only have what was in the cooler. We’ll go shopping after breakfast, okay?” That seemed to satisfy them and they left the room. Jordan thought about possibly going back to sleep, but after hearing the beginning of yet another argument, she knew she’d never have the opportunity.


Reluctantly, she kicked the blankets off her bare legs and rose from the bed. The wood floor felt cold against her feet as she walked toward the lone bathroom to take a shower and prepare for her day. By the time she emerged from the steamy room, the boys were quietly watching television, happily eating some of the fruit, bagels, and juice she’d packed in the cooler the previous morning. Without letting her presence be known, she smiled to herself and went back to her bedroom to get dressed.


Leaning against the door, Jordan took a moment to look at her own environment. In all the commotion yesterday, she hadn’t had the time to appreciate her personal surroundings. The room was very feminine, quite the opposite of the boys’ room. Her walls were painted a cheery sunflower yellow, and the window treatments were done in a sheer, gossamer fabric that pooled on the hardwood floor. There was a large burgundy chaise lounge in the corner of the room with a dressing screen behind it for effect. Small pieces of bleached oak furniture finished off the room, and there was an enormous walk-in closet with mirrored doors Jordan adored.


She was already beginning to feel at home in this place. It was peaceful and quaint and exactly what she had always wanted. Eric had always wanted a large house with large, ornate furniture. He had dictated what kind of decor they had and never let Jordan pick anything for herself. In this little house, with its bright colors and simple furnishings, she felt herself start to heal right down to her very soul.


She was, of course, thankful for that fact because she had paid for the house in advance and it would definitely have been a disaster if she’d had to stay in a place she hated. She’d had enough of that back at home—the home she had shared with Eric.


Checking her reflection in the mirror, she felt mildly encouraged. She didn’t seem to look as tired as she felt lately; her brown eyes looked brighter and her long hair had been recently cut in a more stylish manner that accentuated her high cheekbones. Heck, even her smile seemed more relaxed than it had been in a long time. She was beginning to feel like her old self again, now that she had something to look forward to.


After applying a little makeup—just a touch of mascara and lipstick—she went to check on the boys, who were still engrossed in an episode of SpongeBob.


“Okay, who’s ready to food shop?” she challenged in a playful tone. Both boys gave her a quick glance, then returned their attention to the TV.


Feeling a little of the wind go out of her sails, she repeated herself. The boys got the hint and went about getting dressed and ready to go.


While she waited, Jordan prepared herself half a bagel and a cup of orange juice. Once the boys returned to the kitchen, they helped their mother make the shopping list before heading out the door.


As she climbed into the car, Jordan racked her brain to remember where the local grocery store was located. She couldn’t recall having seen one during their brief drive through town. Not feeling too bothered by the notion, she started the vehicle and headed for town.


It was very early in the morning—not even eight thirty—and the town looked a little deserted.


“That and the fact that the season is over,” he mumbled under his breath, hoping his mother hadn’t heard him.


Driving slowly down the main street, Jordan spotted a figure up ahead. Deciding she had no choice but to ask for directions, she pulled over next to the man and rolled down her window. “Excuse me,” she said. “Could you please tell me where the nearest grocery store is?”


The man had his back to her, momentarily bent over retrieving a newspaper from the ground. Once he stood up and turned around, however, Jordan felt all the color drain from her face.


He was tall, clearly over six feet, wearing a pair of well-worn, form-fitting jeans. His broad chest and shoulders were covered in an indigo-blue button-down shirt, the sleeves rolled up to his elbows, exposing an enticing length of tanned, muscled arms. Jordan’s mouth went dry as she took in his sun-kissed, playfully mussed, sandy-brown hair. But it was his eyes that captivated her, chocolate-brown eyes that sparked with recognition.


“What was it you were looking for?” he asked casually, taking a sip from the travel-style coffee cup he held in his large, tanned hand.


“I was, um, I was looking for the nearest…” She paused to clear her throat. “We need to go to the grocery store,” she croaked.


“Uh-huh,” he replied as he slowly approached her vehicle. His steps were even, measured, and when he was finally close enough to the door to put a hand on it, he glanced inside. He noticed the boys sitting in the backseat, watching him warily.


His lips fought against a grin as he noticed the pulse in her neck beating erratically.


“So, what brings you to the Virginia coast, Jordan?”

Samantha Chase, a creative writing teacher, released her debut novel, Jordan’s Return, in November 2011. Since then, she has published seventeen more titles and has become a New York Times and USA Today bestselling author. She lives with her husband of twenty-four years and their two sons in Wake Forest, North Carolina.