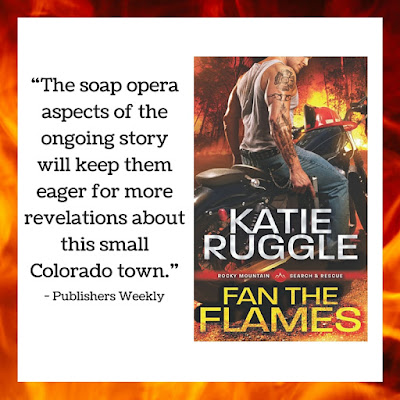 Fan the Flames
By Katie Ruggle 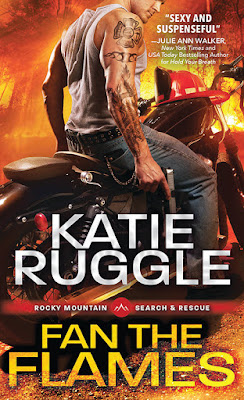 In the remote Rocky Mountains, lives depend on the Search & Rescue brotherhood. But in a place this far off the map, trust is hard to come by and secrets can be murder…

As a Motorcycle Club member and firefighter, Ian Walsh is used to riding the line between the good guys and the bad. He may owe the Club his life, but his heart rests with his fire station brothers…and with the girl he’s loved since they were kids, Rory Sorenson. Ian would do anything for Rory. He’d die for her. Kill for her. Defend her to his last breath—and he may just have to.

Every con in the Rockies knows Rory is the go-to girl for less-than-legal firearms, and for the past few years, she’s managed to keep the peace between dangerous factions by remaining strictly neutral. But when she defends herself against a brutal attack, Rory finds herself catapulted into the center of a Motorcycle Club war—with only Ian standing between her and a threat greater than either of them could have imagined.

If Zup didn’t decide on the rifle within the next two minutes, Rory was going to shoot him.

Unfortunately, because he was the son of the local motorcycle club’s president, killing him—or even just putting a hole where no hole had been before—would pretty much guarantee severe consequences. Since Rory was moderately content with her life at the moment, she’d rather not have it end abruptly. Drawing a long breath in through her nose and praying for patience, she employed her subpar salesmanship skills.

Zup looked up from his scowling appraisal of the SUB 2000. “Maze said he had a Kel-Tec, and it jammed all the time.”

“Tell Maze to quit using crap ammo.” He just frowned at her. With another deep breath, she tried again. “These rifles are built to use common pistol magazines.”

“I know.” He held the rifle to his shoulder again. “That’s why I want one. That, and it can fold in half, so it’d be small enough to carry around in a laptop case.”

“Well, the recoil spring and bolt are heavier than in a pistol.” With a great effort, she kept most of the condescension out of her voice. Rory hated having to explain things to people, especially guys like Zup, who just ignored her anyway. This was why she hadn’t become a teacher. Well, that, and she’d most likely fail the background check—and probably the psych exam. “If you use poor quality rounds, you’re going to get some failures.”

Zup’s frown turned from the rifle to her. “Maze loads all our ammo. Are you telling me he’s fucking it up?”

“What I’m saying,” she gritted through clenched teeth, “is that if you run good ammo through this rifle, it’s going to be reliable.”

After eyeing her suspiciously for a few seconds, he grunted and brought the stock to his shoulder again. He shifted his position several times as he peered through the sights, and then complained, “This steel pipe sucks as a cheek rest.”

“That’s it.” She jumped off the counter where she’d been sitting and held out her hands. “Give it to me.”

Instead, he turned away from her while tucking the rifle close to his chest. “Hang on,” he told her. “I’m still deciding.”

“No, I’ve decided for you.” Rory flicked her fingers in a “gimme” gesture. There was a beep indicating someone had just come through the front door of her shop, and the last of her patience disappeared. “If you can’t appreciate an accurate, dependable, untraceable Kel-Tec SUB 2000 because it’s not comfy enough, then you don’t deserve it. Hand it over.”

Reluctantly, he relinquished the rifle. “I do want it. How much?”

“Nope. Too late.” She pulled down on the trigger guard and swung the barrel assembly up and over the receiver, marveling at the ingenuity it took to completely redesign a rifle so it could fold in half. As she gently placed it into its case, she couldn’t refrain from stroking her fingers over the gun’s practical shape. It wasn’t the most attractive of rifles, but it did its job. She’d take functional over pretty any day.

Zup watched the gun disappear. Although it was hard to tell under his bushy beard, she was pretty sure he was pouting. “Ro-ry…”

“What are you whining about now, Zup?” a low voice asked.

It took all her willpower not to look. If she glanced at Ian Walsh in all his dark, muscle-bound glory, she’d start stammering and blushing. Every time he walked into her store, his melty brown eyes focused on her, black hair mussed by his fireman’s helmet or a motorcycle ride, those full, beautiful lips curving into a friendly smile, she marveled that this incredible person was in her life. They were just friends, of course, but she told herself that it was enough—more than she could expect, really. With his model-perfect features and body, he looked as if he should be attending photo shoots, not leaning on the wall behind the counter, chatting with plain, weird Rory Sorenson.

Plain, weird Rory Sorenson, who right now couldn’t even look at him.

After that first breath-stealing moment when she first saw him, she could usually turn on casual-and-friendly mode, but not after the dream she’d had the night before—a dream that had featured her, Ian, his bike, and not many clothes. Her cheeks flamed at the memory. Keeping her gaze focused downward, she latched the case with more care than was required. 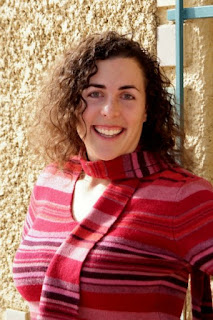 When she’s not writing, Katie Ruggle rides horses, shoots guns, and travels to warm places where she can SCUBA dive. Graduating from the Police Academy, Katie received her ice-rescue certification and can attest that the reservoirs in the Colorado mountains really are that cold. While she still misses her off-grid, solar- and wind-powered house in the Rocky Mountains, she now lives in Rochester, Minnesota near her family.