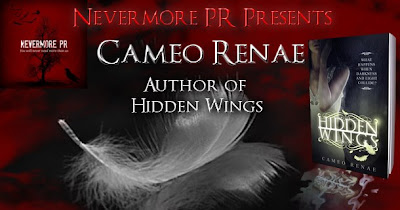 Hey all!
Today on our blog we have the Hidden Wings Blog tour, hosted by Nevermore PR.
Now, this is a book you really need to add to your tbr pile's,
here's a little more info about the wonderful author and Hidden Wings.
Also, we have a special excerpt to share with you. :-)
Cameo Renae

Bio
Cameo Renae was born in San Francisco, CA, raised in Maui, Hawaii, and recently moved with her husband and children to Alaska.
She loved reading from as long as she can remember, and it was C.S. Lewis’ - Chronicles of Narnia – which sparked a fire in her soul which made her want to create her own wondrous, magical worlds, and awesome characters to go on adventures with.
Writing is her passion, and right now, her head is stuck in the YA genre and anything that has to do with the paranormal.
She self-published her debut novel, In My Dreams about a year ago, but it was picked up and re-published in December 2012 by Crushing Hearts and Black Butterfly Publishing. Her newest novel, Hidden Wings (Book 1 in a series), has recently been published through Crushing Hearts and Black Butterfly Publishing on January 18, 2013.
One day she hopes to find her own magic wardrobe, and ride away on her magical unicorn... Until then... she’ll keep writing!
WEBSITE
BLOG
FACEBOOK
Twitter: @CameoRenae
GOODREADS 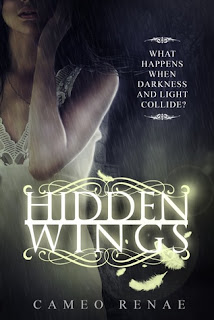 What happens when Darkness and Light collide?
Seventeen is a life changing age for Emma Wise.
As her family's sole survivor in a car crash, she is left with a broken arm, and a few scrapes and bruises. But these are only outward marks; inside, her heart is broken and the pieces scattered.
Whisked away to Alaska, to an aunt she’s never met, Emma starts over. Secrets unveil themselves and now…she doesn't even know who or what she is.
A centuries old prophecy places Emma in the heart of danger. Creatures of horrifying and evil proportions are after her, and it will take Emma, her aunt, and six, gorgeously, captivating Guardians to keep her safe. But, if she can survive until her eighteenth birthday... things will change.
ADD ON GOODREADS
Now, here's a little taste of Hidden Wings...
Excerpt
“Come on Emma! Hold it together!” I whispered to myself.
I couldn’t give up. I couldn’t go back. There was too much at stake. Peoples’ lives were at stake, and sadly entrusted in my feeble, un-transformed hands.
Another torch, ten yards away, lit the tunnel off to the left. Footsteps, scuffling along the dirt ground headed in my direction.
Holy crap… what do I do? What do I do?
Then Dominic’s words rang through my head. Go big, or go home. I really, really wanted to go home, but I didn’t think knocking my mud covered converse shoes together three times was magical enough to send me there. But heck, this all seemed like some twisted fairytale anyway, so I decided to try it. I closed my eyes and quickly clicked my heels together. One…Two…Three…I opened my eyes.
Crap! Whatever. It was worth a try. But, I wasn’t Dorothy, and instead of a witch and flying monkeys, I had a murderous Fallen Angel and Darkling. I’d take flying monkeys over the Darkling any day!
I gathered myself, took in a deep breath, and trudged towards the oncoming evil that lurked around the corner. As soon as I took the turn a Darkling halted in its tracks, his black eyes locked onto mine; its white, creepy face loomed back and forth, sniffing the air, trying to figure out what it had just run into.
“Take me to your leader,” I demanded, crossing my arms over.
**********
Get your copy NOW!!!
Amazon Author Page 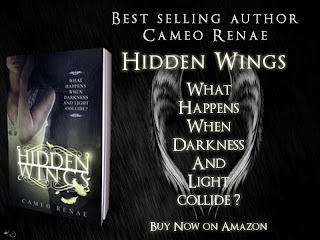 Hidden Wings on Amazon:
KINDLE
PAPERBACK
**********
Thank you to Nevermore PR for hosting this awesome tour and to Cameo Renae for writing such an amazing book!
Don't forget to follow the rest of the tour to find out all the stops, go HERE
HAPPY READING!!!
Posted by Stacey at 12:00 AM