With the 4th installment of the Her Master's Kiss set to be released in the next coming weeks, I thought I would see if I could find out a what goes on in Vivien's creative head.
So we did an interview.
Then her creative and generous head said to me,
"Let's do a giveaway too!"
So I said,
"OK!"

Now I have been trying to help promote Vivien's HMK series since book 1.
I love introducing new people to one of my most favorite book series as I believe it is a series that deserves a great fan base.

Here is a little about the series so far. 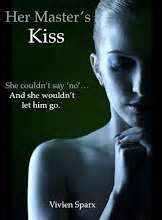 When Renee decides the only way she can save her relationship with a hurtful boyfriend is to become submissive, she enlists the expertise of a dark and brooding master.
However, Renee's training soon has her falling for master Stefan, and as she becomes immersed in the spellbinding erotic world of domination, Renee realizes she's infatuated with a man who remains mysteriously out of reach; a man who refuses to be loved.
Behind Stefan's cold, remote facade is a man dealing with his own past and his own pain.
'Her Master's Kiss' is an intense emotional romance story filled with passion, conflict and steamy erotica!
A story of over 20,000 words! 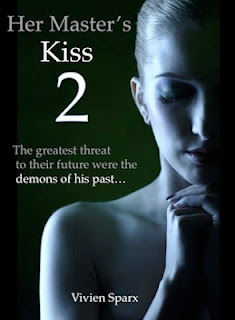 For Renee, settling in to life as Stefan's submissive is full of challenges - and her dark sexy Master is keen to ensure Renee learns her lessons well!
But even as Stefan struggles to come to terms with his emotional demons and open himself up to Renee, a sudden dark shadow from Stefan's past appears, forcing the couple to confront their greatest fears, and challenging them to face their real feelings for each other.
'Her Master's Kiss 2' is a sexy, erotic romance full of passion, emotion, drama and suspense. It's the ultimate conclusion to the bestselling 'Her Master's Kiss'.
A story of approximately 20,000 words. 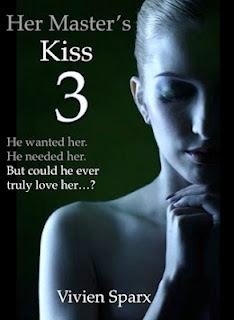 RENEE AND STEFAN ARE BACK - AND THE STAKES COULDN'T BE HIGHER.
"He wanted her. He needed her. But could he ever truly love her...?"
When Stefan and Renee find themselves in a deepening relationship, the fragile bonds of trust so carefully developed are suddenly broken when a careless mistake is made. Suddenly their future together is in jeopardy as Stefan struggles to deal with a relationship where he is no longer the Master, and he no longer has control. Everything is at risk... and no one is safe.

I personally am in love with this series. It's dangerous, sexy, intense and romantic.
Vivien took some time away from her busy writing schedule to answer some questions for us.
Here is what she had to say.


Have you always had such a vivid imagination?
No! I actually worry about this when I write. I often picture a scene, but I do so with broad strokes- there is no real detail. I constantly have to zoom my imagination in to explore the details that make a scene descriptive. Again, it's a fine line. Not enough detail means readers will struggle to feel in the moment. But if you write too much detail everything becomes bogged down and it slows the pace of the story. I don't know if I do this well or not...


Tell us a little about the process you go through while writing your books?
Writing is the loneliest and most demanding work around! I try to work to a routine but life gets in the way, and my good intentions never last long. For me, discipline is important and I write every day. Often I can start writing at 8.30pm and work until 4am. The story begins with just an idea. That's often the hardest part. Once I have the idea I write a short 3-page outline, organising the order of the scenes I am going to write. Then I just sit down and work on one scene at a time. When I'm doing it properly, I'm constantly stopping to jot down notes because the characters begin to have conversations in my head. I can be writing scene 2, and suddenly there will be a burst of conversation in my imagination between two characters relating to scene 6. I have to write that stuff down somewhere before I forget. Actually, now that I think about it… it sounds quite bizarre!

Why writing?
I've been an avid readers since I was a teenager. I always wanted to create something…. and writing gives me the chance to do that. I think it's a noble and worthy cause to dream about entertaining people. That's always been my dream.

Out of all of the books you have written, which one is your favourite?
'The Falcon Falls' is my favourite book. I loved the idea behind the story, and the chance to blend a little bit of history with mystery and romance and adventure. It was the most fun to write, and it gave me the most freedom to let my imagination run wild. I also enjoyed the research that was needed to get the story right, and bring all the elements together. I have a sentimental place in my heart for Her Master's Kiss, simply because it has been my best seller, and because so many reader seem to like Renee and Stefan. The greatest thrill I get is when people message or email to share their feelings about the Her Master's Kiss series. It's really wonderful to reach readers and have them care about the characters you create.


Onto HMK, if it were to be turned into a movie, who would you have play Stefan & Renee?
I don't know about Renee… I never really had an actress in mind, but I always imagined a slightly scruffy Christian Bale as Stefan. At one stage my Facebook friends were posting images of actors and actresses. I think Christian Bale is the closest actor to my imagined Stefan.

Now some personal questions to help us get to know the real you.

What is your favourite colour?
Amethyst

Favourite movie?
Twilight. Absolutely. All of them.

Tea or Coffee?
Sorry, neither. I don't drink anything hot.

Winter or Summer?
Winter! I love being inside when it's freeing cold and raining outside. On days like that I look out of the window and think, "well at least I don't have a job as a greenskeeper!" Summer is torture! I'm stuck inside a room, writing stories and the rest of the world is enjoying themselves at the beach.


Thank you so much for answering our questions. We wish you all the success with your future endeavors.
Thank you! I have said publicly on many occasions that Sassy Book Lover Blog and your thousands of readers were the very first people to encourage me and embrace my writing. If it wasn't for you and everyone who reads your blog I wouldn't have the opportunity I now have. I can never thank you or your readers enough!

It has been our pleasure!


Now for a sneak peak of Her Master's Kiss 4 exclusive to Sassy Book Lovers!

Renee felt Stefan lift his hands, his fingers on the burning hot skin of her breasts and the sudden urgent pain of her wanting was too much to bear. She cried out – it was a soft little whimper – but the intensity of it trembled through her body, and sparked Stefan’s own hunger.
His mouth became forceful and demanding, pressing and sliding against her lips with increased frenzy until Renee felt herself become light-headed. Then he lunged for her neck and throat, trailing ragged kisses down to the breast in the palm of his hand.
He bowed his head and took the nipple between his lips. Renee arched her back, thrusting herself upwards, desperate to meet him. Her hands in his hair became entwined in the thick springy curls at the back of his head, guiding his mouth, holding him firmly against her as the draw of his sucking lips made her moan softly and lunged forward with her hips. She felt his hardness brush against her, and it was like the thrust of an iron bar.
Her skin was burning hot, but Stefan’s mouth ignited deeper and more intense fires within her. She closed her eyes. Her breathing lost its rhythm. She surrendered to his touch.

I think my breathing just lost it's rhythm!


Time for a giveaway!

To help promote the series Vivien has reduced the price of HMK1 on Amazon to 99c permanently!
Click HERE to get your copy now.

Vivien has also recently released another book.
The Falcon Falls
It is one of my favourite books from Vivien.
Check out my review HERE.
It is a MUST READ!

I hope you enjoyed your time getting to know Vivien and her bestselling series!
Good-luck in the giveaway!
Posted by Renee Booth at 6:30 AM